Process reductions and raw material savings are common methods used to respond to increasing cost pressures, but these approaches can result in yarn quality losses.

By integrating the draw frame into the card, spinning machine makers provide a solution that makes process reductions particularly promising in rotor spinning because, in contrast to ring spinning or air-jet spinning, this spinning method is virtually resistant to differences in the degree of drawing and to the amount and orientation of the fiber hooks.

To examine this matter further, the influence of short fiber content on rotor-yarn quality produced using different preparation lines was researched at the Germany-based Hochschule Niederrhein – University of Applied Science in cooperation with Germany-based Trützschler GmbH & Co. KG and Germany-based Schlafhorst, a Saurer AG company. The two companies made the study possible by providing the test material and their machinery. During the study, direct spinning with an integrated draw frame (IDF) was compared to conventional preparation with two drawing passages or one drawing passage (See Figure 1).

The materials were prepared on the Trützschler Card TC11 with Integrated Draw Frame IDF2 (see Figure 2) and on the TC11 card and subsequent Draw Frames TD7 — without levelling — and TD 8 — with levelling. Table 2 illustrates the most important production parameters in spinning preparation. To eliminate the influence of the card, the card produced a sliver count of 7.7 ktex (Ne 0.077) with identical settings for both preparation lines. The influence of the sliver count on rotor spinning was eliminated by refining this card sliver count via the IDF or one or two drawing passages to the same starting sliver count of 5.5 ktex (Ne 0.11).

The different slivers were then spun into various yarn counts on a Schlafhorst Autocoro rotor-spinning machine. 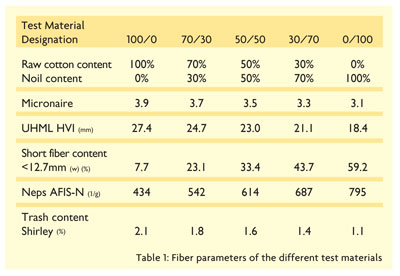 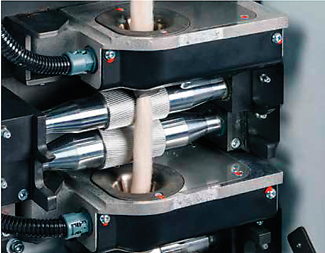 Influence On Sliver Quality
The only time problems appeared during processing with the different test materials was using conventional spinning preparation with two drawing passages for the materials with a noil content of 70 percent or above. The increased degree of fiber drawing on the second draw frame results in a low fiber retention force in the main draft. On materials with extremely high short fiber content this leads to such a great loss of floating fiber control that a trouble-free drafting process no longer is possible. This causes so-called package drafts during which packages of floating fibers are simultaneously accelerated in the draft zone. This creates considerable unevenness in the sliver, which makes further processing to an acceptable yarn quality nearly impossible.

With a noil content of 70 percent, it is alternatively possible to create another sliver with only one drawing passage since the higher fiber retention forces still ensure an acceptable control of the floating fibers due to the lower degree of drawing. However, with 100 percent noils, even processing with only one draw frame is not possible without the occurrence of package drafts.

Because of the significantly lower drafts, the IDF is very resistant to these problems; thus all five test materials can be processed without any problems on the card with IDF.

The resistance to floating fibers when using the direct spinning process via IDF also is evident in the sliver evenness results (See Figure 3). An advantage of the reduced preparation line was apparent here during all trials. Even though the advantage is still small for cotton without noil content, it increases with growing noil content because of the surge in floating fibers. As explained above, processing the material with 70 percent noils without IDF is only possible with one drawing passage, and processing of 100 percent noils only with IDF. 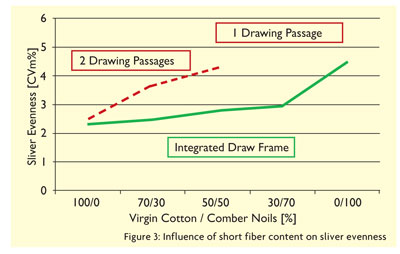 Influence Of Spinning Stability And Yarn Quality
Yarns with a count of Ne 12, Ne 20 and Ne 30 were spun. The most important spinning equipment and settings programmed in to the rotor spinning machines are shown in Table 3. They parameters were selected in such a way that all the test materials can be spun if possible. 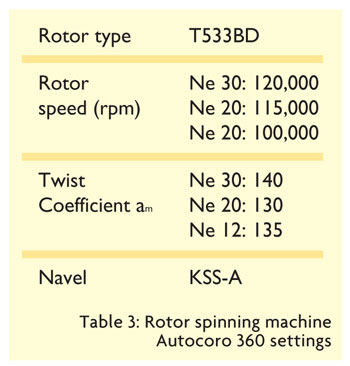 From the feed consisting of 100 percent noils, only a yarn with a count of Ne 12 can be spun. It can be said that when using direct spinning, the number of yarn breaks is almost always lower during all trials than when using the draw frame process. This applies in particular to the trials with an increased number of yarn breaks. Thus, for instance, at 5,000 yarn breaks per 1,000 rotor hours, the spinning stability of the feed containing 70 percent noils is so high when spinning a yarn with Ne 30 count from a conventionally produced feed that this material is not suited for practical application because of the anticipated efficiency losses at the spinning machine. In contrast, when using a feed with 70 percent noil content produced with the IDF, the yarn breaks are considerably lower at approximately 1,500 yarn breaks per 1,000 rotor hours. This yarn break figure can be economically produced with a rotor-spinning machine with individual spinning unit technology such as the Autocoro 8. According to information from Schlafhorst, the Autocoro 8 achieves a very high long-term efficiency of 95 to 97 percent at approximately 1,700 yarn breaks and clearer stops per 1,000 rotor hours in practical application.

As suggested by the results of sliver evenness, the yarns produced in direct spinning have improved yarn evenness when using feeds with noil content (See Figure 4). The same applies as with sliver evenness — the higher the short fiber content the more advantageous the reduced preparation process with integrated draw frame in contrast to the conventional process with two drawing passages, or one drawing passage for 70 percent noil content. The only time the process with the drawing passages is slightly advantageous for yarn evenness because of improved blending is when processing 100-percent raw cotton. 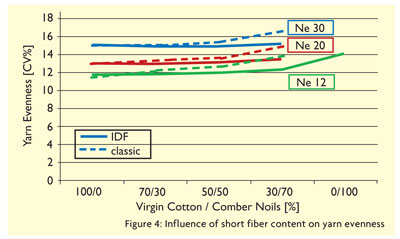 A similar situation exists with respect to yarn imperfections. In Figure 5, all imperfections of the category thin places -50 percent, thick places +50 percent and neps +280 percent were accumulated to a “Total IPI” value. The same applies to yarn evenness. The advantage of conventional preparation of 100-percent raw cotton compared to direct spinning when using this yarn parameter reverses at a noil content of 30 percent and above.

The influence of short fiber content and spinning preparation on yarn strength also is comparable. Because of the improved fiber orientation of the sliver prepared with conventional spinning preparation and the resulting reduced fiber damage during the opening process in the rotor spinning machine, the strength of the yarn made of 100-percent raw cotton is up to 0.4 cN/tex higher than the strength of the yarn made using direct spinning. However, this slight advantage disappears with growing noil content or even reverses when reaching a noil content of 70 percent because the improved yarn evenness has a positive influence on yarn strength, thus compensating the slight loss in strength. It can also be said that the two different preparation processes have no impact on yarn elongation.

Summary
In general it can be said that direct spinning is suitable for all yarn counts. In comparison to conventional preparation via draw frame passages, the sliver and subsequent yarn qualities are even advantageous as soon as noils of 30 percent and above are added to the raw cotton. This advantage increases with growing short fiber content. The spinning stability on the rotor-spinning machine also is advantageous when applying the direct spinning process. Spinning 100 percent noils is actually only possible using direct spinning.

A process reduction by replacing the existing drawing passages with a draw frame integrated into the card definitely has the potential to minimize the costs in the spinning mill. This study was able to show that this type of process reduction has a great potential to improve quality as well, particularly when using cotton feeds with higher short fiber content.