There have been many developments in the dyeing, printing and finishing arena, and many of those developments are highlighted in published studies.

Much of the published research centers on three areas: natural dyes as alternatives to man-made dyes; environmental issues, including wastewater color removal and source reduction; and dye application studies, such as waterless dyeing, new dyeing auxiliaries and digital printing. A majority of such developments are published in journals such as the AATCC Review, Coloration Technology, Colourage, Fibers and Polymers, Textile Research Journal, The Journal of the Textile Institute, and the recently launched AATCC Journal of Research. These journals cover results from fundamental and applied research, as well as brief perspectives on topics of general interest to the readers.

Natural Dyes
Research on natural dyes is inspired by the belief that such dyes are environmentally friendly alternatives to man-made dyes because they are biodegradable, renewable, and perceived as non-toxic, especially since some can be used in food, drug and cosmetic products where they are subject to stringent safety and toxicological standards. The majority of these dyes are obtained from plant rather than animal sources (See Figure 1).

Today, the application of natural dyes to textiles involves cotton as the principal substrate, although silk is a frequent target. This process involves four key steps: plant extraction; mordanting; rinsing; and dyeing. The second step is especially important because nature did not develop its colors with textiles in mind. Consequently, they have no inherent substantivity for textile fibers and must be bonded through the use of an intermediary as illustrated in Figure 2.

Recent developments in this area include ink-jet printing on cotton using natural dyes such as annatto, cutch, and golden dock (See Figure 3). Assessment of fastness properties indicated washfastness and crockfastness levels typical of Class A direct dyes and low lightfastness1. Annatto also has been used to dye jute fabric, using bio-mordants such as myrobolan and pomegranate, in addition to traditional mordants including alum and FeSO4. Best washfastness was obtained using alum, with post-mordanting with the inorganic mordants affording the best combination of color yield and fastness properties2. Similarly, research involving the use of a bentonite-type clay mordant ([Na0.4Ca0.03K0.01] [Al1.6Mg0.3Fe0.1]Si4O10(OH)2) in place of a traditional mordant has been reported for applying Alizarin to wool3. Pre and post-treatments at 3- to 10-percent levels were conducted, with pretreatment giving slightly better washfastness and post-treatments giving slightly better lightfastness.

Dye Application Studies
In view of broad interest in approaches to minimizing salt and color levels in dye wastewater following cotton dyeing, especially with reactive dyes, cationization of cotton cellulose has been undertaken. The results of these efforts were summarized in a recent review4. The heart of this work is summarized in Figure 4, where reactive intermediate (3-chloro-2-hydroxypropyl) trimethyl ammonium chloride (CHPTAC), which is used to produce cationic groups in cotton that are attracted to anionic dyes in the absence of salt. Use of reactive dyes leads to significant reductions in wastewater color and higher dye-fiber fixation. Commercial consideration of this technology is underway. Further, the presence of cationic groups on cotton opens the door to using acid dyes affording brighter shades. In related studies, polymeric and chlorotriazine-based reactive species (see examples in Figure 5) have been developed to produce cationic cotton.

The use of super-critical carbon dioxide (SC-CO2) as a medium for waterless dyeing of polyester is receiving renewed attention, owing to the design and commercialization of new machinery. Developments in this area were reported at the 2013 AATCC Conference on Dyeing Technology5. Present-day developments have opened up a sustainable way of polyester (PET) dyeing that will soon be followed by dyeing of natural fibers such as wool and cotton on a commercial scale. In other SC-CO2 studies6, a lab-scale machine was built and used to develop a method for fabric rope dyeing with Disperse Red 74 (See Figure 6). In comparison with conventional dyeing processes, running costs were lowered by employing this dyeing process in a rope dyeing machine. Also, CO2 recycling efficiency ranging from 92-95 percent was reported.

In other dye application research, an approach to dyeing man-made fibers using disperse dyes having a built-in dispersing agent was reported. In this work, Disperse Red 60 containing a poly(ethylene oxide)–poly(propylene oxide) appendage (see Figure 7) was synthesized and demonstrated to give dyeing behavior and fastness properties comparable to a physical mixture of disperse dye and dispersing agent7.

Digital Printing
Transferring a design from the creative mind of a designer to a substrate without the need for screens or pressure now is possible using digital printing technologies8. Its use on signage, flags, technical textiles, home furnishings, and basic apparel is well known. Digital printing inks contain acid, disperse, or reactive dyes; or pigments. The technology can be used for proofing, samples, and short runs more cost effectively than conventional methods. Digital printing processes offer a range of color processes including 3 color (CYM), 4 color (CYMK), 5, 6, 7 and 8 extended gamut color options, matching the growing market demand for full color. This technology is believed by many to be the way forward for textile printing because it affords possibilities not available with conventional methods, including unlimited colors, tonal graphics, unlimited repeat sizes, fast and frequent design changes, fine line patterns with great precision, economical shorts runs, mass customization, high definition, and photographic quality. Figure 8 shows examples of some interesting digital prints. The development of print heads that permit printing with both pigment and dye-based inks and that allow speeds approaching rotary screen technology, makes reshoring textile printing possible. 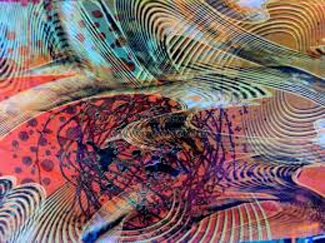 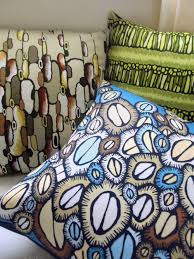 Environmental And Regulatory Issues
Bearing in mind the strong influence of environmental regulations on dye manufacturing and application practices, it seemed appropriate to end the article by discussing regulatory matters impacting color chemistry operations. Much of the activity in this area can be traced back to the discovery of bladder tumors in various plant workers who were exposed to aromatic amines such as benzidine and beta-naphthylamine during azo dye manufacturing. This recognition led to termination of the use of such precursors in much of the western world. Once it was later shown that azo dyes such as Direct Black 38 can undergo metabolism in mammalian systems to produce the benzidine precursor used in its manufacture (see Figure 9), regulations such as EU Directive 2002/ 61/EC were instituted9. This was an important development because it prevented the sale of products containing dyes that were manufactured from any of a group of 20 (now 22)10 aromatic amines. The metabolism of these aromatic amines following their release from azo dyes is of concern, because of their potential to produce nitrenium ions that can react with DNA to produce mutations — an initial step in malignant tumor formation.

This knowledge contributed to other international studies, regulations and policies such as the Canadian Environmental Protection Act, 1999 (CEPA 1999), International Agency for Research on Cancer (IARC) Monograph99, and Registration, Evaluation, Authorisation, and Restriction of Chemicals (REACH). CEPA covers chemical substances made or imported into Canada, and gives attention to azo acid, basic, direct, disperse, metal complex, and reactive dyes11. IARC Monographs cover evaluation of carcinogenic risks to humans12. REACH covers chemical substances made or imported into the European Union, with emphasis on the use of the 151 chemical substances of very high concern, and is due to be fully implemented in 2015.

A key outcome of the 2010 IARC report was the designation of dyes metabolized to benzidine as themselves belonging to classification Group 1 — carcinogenic to humans. This was an important development because it equated benzidine-based dyes with benzidine itself.

A key component of the 2015 CEPA report pertained to a screening assessment on 61 azo direct dyes and eight azo reactive dyes. These 69 substances constituted two subgroups of the aromatic azo and benzidine-based substance grouping assessed as part of the Substance Groupings Initiative of the Government of Canada’s Chemicals Management Plan based on structural similarity and applications. Dyes in this grouping were identified as priorities for assessment because they met categorization criteria under subsection 73(1) of CEPA 1999 and/or were considered as a priority based on other human health concerns. Only seven dyes — six azo direct dyes and one azo reactive dye — were reported imported in quantities above the 100 kilogram per year survey reporting threshold. Ultimately, it was concluded that the 69 dyes did not meet any of the criteria set out in section 64 of CEPA 1999.

REACH legislation is the most recent and extensive of its type13. This E.U. regulation is designed to improve the protection of human health and the environment from the risks that can be posed by chemical substances including dyes, while simultaneously enhancing the competitiveness of the E.U. chemicals industry. It also is designed to promote alternative methods for the hazard assessment of substances, in order to reduce the number of tests on animals. Companies are responsible for collecting information on the properties and the uses of substances they manufacture or import at or above 1 ton per year. They also have to make an assessment of the hazards and potential risks presented by each substance. This information is communicated to the European Chemicals Agency through a registration dossier containing the hazard information and, where relevant, an assessment of the risks that the use of the substance may pose and how these risks should be controlled. Thus, a type of Chemical Management Plan is associated with each registered substance.

The Road Ahead
It is clear that the use of both natural and man-made dyes for textile coloration is here to stay because each serves a unique purpose. Equally clear is that the former will not displace the latter to any significant degree, owing to the superior fastness, ease of production and application, ready availability, and product consistency of man-made dyes. Similarly, digital printing and CO2 dyeing have great potential as key coloration methods for the decade ahead, because of the print speeds and amazing image reproducibility now associated with digital printing and the strong interest in waterless dyeing associated with CO2 dyeing. If indeed natural fibers can be effectively dyed using SC-CO2 media, this would be a remarkable development.

Environmental regulations surrounding colorants and coloration are here to stay. They can appear to be a pain point for doing business, but with a bit of ingenuity, they also can provide an opportunity for new business.