The recent Techtextil North America 2015 closed its doors after an event that show organizer Atlanta-based Messe Frankfurt Inc. said exceeded records from the past three west coast editions of the show. Techtextil collocated with JEC Americas Composites Show & Conferences — organized by Paris-based JEC Group — and selected Houston for the 2015 edition of the show based on attendee and exhibitor feedback. It was the first time the west coast edition of the show, now in its fourth edition, was held in Texas.

This is typically a smaller event than the show held in Atlanta in even numbered years, but organizers, exhibitors and attendees all seemed satisfied with the outcome of the show. Visitor numbers were combined with JEC visitor numbers since the two shows shared the exhibit hall and visitors were allowed to traverse the whole showfloor regardless of which show they had registered for. The collocated event counted some 2,821 total visitors across the three days, which Messe Frankfurt reported was a 39-percent increase in the total number of visitors when compared to the 2013 west coast edition of the show held in Anaheim, Calif. Techtextil also welcomed 145 exhibitors from 18 countries, which represented a 98-percent increase in net square footage and a 96-percent increase in the number of exhibitors compared with the Anaheim show. 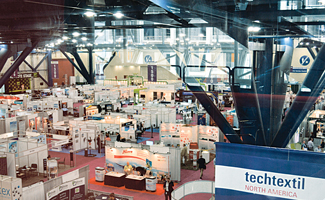 Most Techtextil North America participants Textile World spoke with said the quality of visitors was impressive even if visitor traffic was light.

“We had a high level of traffic and a high level of qualified, quality traffic during the show,” said Josh Davis, marketing manager, PA Group USA. “As the only software company exhibiting at the show, we had a definite advantage, and are happy we chose to participate in the west coast edition of Techtextil.”

“We didn’t have too many visitors at the booth,” said Tom Johnston, sales manager, Greenville-based Picanol. “But I believe we developed two really strong leads. And it only takes one lead resulting in a sale for it to have been worthwhile to participate in the show.”

Successful Symposium
Techtextil also offered visitors a chance to participate in educational seminars. The symposium sessions ran concurrently with the exhibit hall opening times and featured 10 sessions with 33 presenters over the three days. Attendees were invited to interact with the presenters during a question and answer period at the end of each symposium session.

“The sessions were simply fantastic,” said Pourdeyhimi. “We had a full house all the time, with some people standing in the back during some sessions. Some of the speakers I invited were first-time speakers for Techtextil, and our speakers were incredibly impressed with the organization and professionalism.”

JEC Collaboration
The synergy created by the blend of technical textile and composite technologies presented at Techtextil and JEC Americas was obvious. The collocated shows presented a great opportunity to network and share ideas.
The Houston show represented the fourth edition of JEC Americas, and show organizers reported a 15-percent growth in space and exhibitor numbers.

In addition to a variety of events, seminars, interactive displays, awards, and targeted business meetings, JEC presented two keynote speakers on the show floor — former NASA astronaut Ron Garan proved to be a big draw on the first day, as did Byron Pipes, the John Bray Distinguished Professor of Engineering at Purdue University, on the second day. 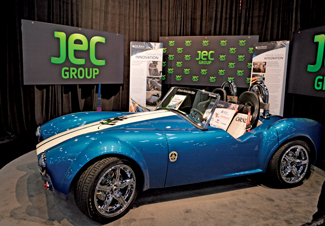 A highlight on the JEC Americas showfloor was the 3-D printed Shelby Cobra developed at the Oak Ridge National Laboratory, Oak Ridge, Tenn.

“The dynamic interactions between exhibitors and attendees in Houston show how gathering the best and brightest minds can drive growth in the region and communicate the value of composites more broadly,” said Frédérique Mutel, president and CEO, JEC Group.

The JEC Group is already busy planning the JEC Americas Composites Show & Conferences 2016, which will be the only composites show on the east coast next year.

Messe Frankfurt predicts Techtextil and Texprocess will attract a combined 700 exhibitors and more than 8,000 visitors, with JEC Group predicting similar exhibitor numbers for its event. Mark your calendar for the chance to network with a large slice of the technical textiles, composites and textile processing industries next May.