Innovations In Dobby Shedding Systems
Dobby shedding motion controls the movement of large number of harnesses. As the number of harnesses increases, so does the load on the motor that drives all moving parts connected to the weaving essential motions — shedding, weft insertion, beat up, and warp and fabric controls — and the weaving secondary motions — warp stop, weft stop, weft selection, leno and tuck-in. When the weaving process is stopped for any reason —warp break, weft break, or other stop — the potential for start-mark defects exists. When weaving is resumed, the motor initially has to overcome the inertia of the machine’s heavy moving parts, and the machine’s set speed is not reached immediately. Consequently, the beat-up force is weaker and the new pick is not forced far enough and stays slightly further from the cloth fell creating a start-mark defect. Innovations developed by weaving machine manufacturers and shedding systems producers offer solutions for start-mark defects as well as other benefits. 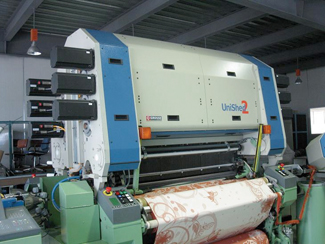 Using a single drive for the entire weaving machine, Germany-based Lindauer Dornier was the first to pursue a system that can eliminate start-mark defects. The company exhibited its SyncroDrive system for the first time at ITMA 2007 in Munich, Germany. The drive focuses on the stability of motor rotational speed. SyncroDrive separates the large dobby mass from the drive at the starting moment, and then engages the dobby shedding system after the inertia of other moving parts has been overcome. This permits the weaving machine to reach the set weaving speed during the first weaving cycle after the start and before beat-up, thus eliminating start marks.

Switzerland-based Stäubli was the first company to pursue the development of a dobby system with individual control of each harness. The UNIVAL 500 — which uses powerful actuators, one for each harness, to control harness movement — was an expansion of the company’s Unival 100 concept. The actuator’s direction of rotation determines which harnesses are raised or lowered to form the shed according to the weave design. 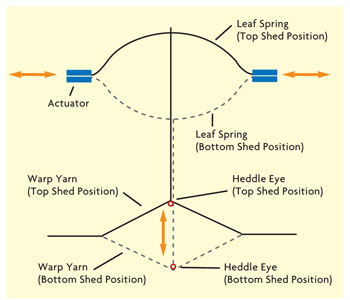 Benefits Of Individual Harness Control
The individual harness drive allows easy shed timing and independency of shed timing from other events, while synchronizing all events to work in harmony during a given weaving cycle. The shed timing in a traditional shedding motion is rigid and fixed for each weaving cycle. The individual control of harnesses makes it possible to time the shed differently for each weaving cycle if desired. For instance, in weaving fabrics with a mixture of weft yarns — some containing spandex and others without — the shed timing for the former requires early shed to bind these yarns before the beat-up event so they are secured and bound to prevent the spandex yarn from retracting back and causing major fabric defects. With such innovation, high-stretch spandex yarns easily can be woven. In general, early shed is not desired because of the dragging force of the weft in crossed warp yarns, which causes abrasion and weakening of the warp and weft yarns. Yarns without spandex can be timed in a normal shed whereby warp yarns are leveled at the beat-up event. The combination of early shed and normal time shed is useful when weaving variable pick density where one or more of the pick densities are set to a maximum and the other densities are at lower values than the maximum. Early shed is required for the maximum pick density stripes.

In traditional dobby systems, there is an electromagnet and several links for each harness. In dobby shedding with individual harness control, the electromagnets and links are eliminated. Also, the load on the main motor that drives the other weaving mechanisms is reduced. This combination allows significant noise and vibration reduction as well as increases in weaving speed.

One of the reasons for limiting the number of harnesses in traditional dobby was concern for significant load on the motor, which would limit design capability. This is not an issue with individual harness control. Stäubli offers its Unival 500 in more than 50 harnesses. With such high number of harnesses, intricate dobby designs, which were not possible before, can be created. Because each harness can be raised or lowered at different heights for each pick if needed, formation of weaves with longer floats before the next intersection can be produced. The height of a harness can be controlled to absorb the slackness of the floated yarn or yarns until the weave intersection takes the extra length of floated yarns. Again, this is a plus in terms of design intricacy.

Innovations In Jacquard Shedding Systems
Until the 1980s, the mechanical jacquard systems were most commonly found in industrial settings and they still exist today in developing countries. These systems have too many parts: cylinder, pattern cards, needles, needle springs, hooks, neck cords, harness cords, heddle wires, and returning springs for each harness cord. The parts work in harmony for selection of hooks, and hence warp yarns, to be raised or lowered for each shed according to the weave design that is registered on the punch pattern cards. The jacquard head parts get their movement from a drive connected to the main weaving machine motor, which adds more complications because each weaving machine has a different main drive configuration requiring different connection configuration to the jacquard head. The high number of mechanical parts for jacquard machines along with their heavy mass and complicated motions limited weaving speed to a degree that jacquard was not compatible with shuttleless high-speed weaving.

Traditional jacquard capacity, whether mechanical or electronic, was limited, which requires harness tie and weaving several small to medium design repeats across the fabric width. This posed challenges for design innovation and flexibility. The standard size or capacity of jacquard machines ranges from 448 to 1,792 hooks. A given harness tie type — straight, center, border, or mixed harness tie — has remained unchanged for a long time because their construction takes a fairly long time. For this reason, a jacquard designer has to fit patterns to existing harness ties. Jacquard machine manufacturers responded to the design capability challenge by introducing individual control of harness cords (or warp yarns), and mega capacity. In mega-sized jacquard machines offered by Stäubli, the number of hooks may reach up to 18,432. The individual warp yarn control and mega-sized jacquard machines permit the creation of extremely intricate large-sized patterns, one large pattern across the entire fabric width, or several small- to medium-sized patterns across the fabric width may be created.

Grosse’s UNISHED
The earliest version of Germany-based Grosse’s UNISHED was exhibited at ITMA 1999 in Paris as a prototype. The machine, known as Unished 1, was shown again at ITMA 2003 in Birmingham, England, with little improvement. At ITMA 2007, the much improved Unished 2 was exhibited, and approximately two years later the machine was available commercially. Figure 1 shows the commercial version of the Unished 2 mounted directly on the weaving machine frame weaving one large pattern across the entire fabric width. Figure 2 illustrates the shed formation principle of the Unished. The configuration of the Unished led to the elimination of harness cords, magnets, hooks, pulleys, springs, and the gantry. At ITMA 2011, the Unished 2 was shown on the Tsudakoma booth installed on a water-jet weaving machine, the ZW8100. This was the first time a water-jet weft-insertion weaving machine was combined with a jacquard shedding system at ITMA. 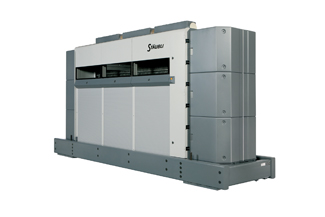 Stäubli’s UNIVAL 100
At ITMA 2003, Stäubli introduced the Unival 100 in its commercial configuration (See Figure 3). Figure 4 illustrates how the shed is formed. In the figure on the left, an actuator — an extremely small stepping motor Stäubli named JACTUATOR — is shown while selecting its harness cord, the warp yarn, for the upper shed. The image on the right shows a jactuator with its warp yarn selected for the bottom shed. In this system, magnets, hooks, knives, and pulleys are eliminated. At ITMA 2003, a Unival 100 with capacity of 7,920 was mounted on a Picanol OMNIplus-6-J 250 weaving machine and demonstrated weaving mattress ticking and table cloth fabrics where the pattern was changed on the fly at 1,025 picks per minute and a filling insertion rate 2,460. This rate of filling insertion is the highest in the history of jacquard weaving. With this technology, weavers can manufacture intricate jacquard designs at the speed of commodity fabrics. The configuration of the Unival 100 is modular, which allows the capacity to vary from an extremely small number of cords for narrow fabrics and label weaving, to extremely large numbers for broad weaving. The Unival 100 is available in a variable capacity of up to 20,480 jactuators. 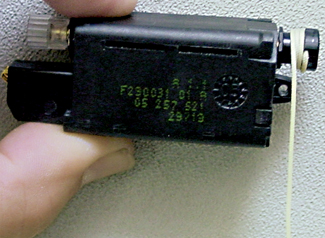 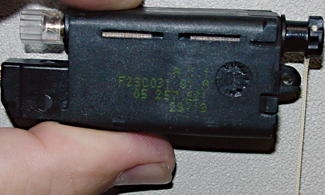 With the Unival 100, the shed can be optimized for each filling insertion, depending on the quality and type of yarn used.

Because there are no knives that raise the yarns at the same shed height, warp yarns may be raised to different heights. The Unival offers true individual warp yarn control. This feature provides major opportunities for weavers. With such a system, several sheds can be formed allowing the weaving of face-to-face pile fabrics and 3-D structures including 3-D orthogonal preforms for composite applications. More details on 3-D weaving and other opportunities will be discussed in part two of the article.

Editor’s Note: Dr. Abdel-Fattah M. Seyam is a professor at Raleigh, N.C.-based North Carolina State University’s College of Textiles, Department of Textile and Apparel Management. This article is based on Seyam’s presentation given at the 2014 Textile World Innovation Forum. For additional reading and detailed technical information about shedding systems, please see the article online at TextileWorld.com for a list of resources.