Switzerland is one of the smallest countries in Europe and has very high living costs compared to
other nations around the world. Yet, the country is not a member of the European Union (EU).
Switzerland has no direct access to the sea, and its main natural resource is water. However, the
country of some 8 million people enjoys a quite stable economy. This is also the case for the Swiss
textile machinery industry. Is there any secret for that ongoing success?

After ITMA 2011 and ITMA Asia + CITME 2012, the Swiss manufacturers of textile machinery and
auxiliaries expressed in many discussions their overall satisfaction with their recent economic
situation. In spite of the euro crisis and some problems in Asia, particularly in China, the Swiss
textile machinery manufacturers are well-prepared for the future. 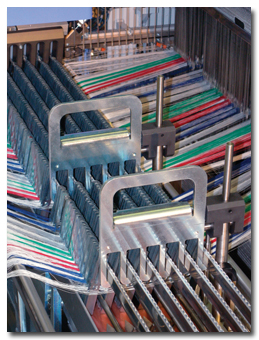 Stäubli reports that automatic drawing-in machines are very much in demand.

TextileWorld.com
‘s press time, there are no firm figures for the full year 2012 available for the Swiss
economy and the textile machinery industry. In November 2012, overall Swiss foreign trade grew
exceptionally well. According to the Swiss Federal Customs Administration, exports rose within a
year by 5.1 percent in spite of a very strong Swiss franc, while imports rose 5.4 percent. The
overall trade surplus for November alone was more than 2.9 billion Swiss francs — the
second-highest monthly surplus ever — and for January to November 2012, it was 23.5 billion Swiss
francs. Export sales increased in November, varying by industry.

For 2012, the gross domestic product (GDP) is estimated to have grown by some 0.9 to 1.0
percent. The Swiss economy is supported by robust domestic demand, especially in construction,
retail and insurance sectors. However, it is characterized by difficulties in almost all export
sectors, which are jeopardized by the strong Swiss franc.

The situation in Europe remains insecure for all Swiss companies, including those in the
textile machinery industry. Experts predict that the European debt crisis will last at least
another two or three years. According to economiesuisse, the eurozone will have negative growth in
2012 and 2013 of -0.4 percent and -0.5 percent, respectively. economiesuisse is the largest
umbrella lobby organization in the Swiss economy. It represents more than 100,000 companies that
employ a total of 2 million workers. 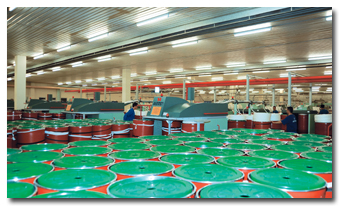 According to Rieter, markets will stay dynamic and volatile; flexibility and speed will
remain very important.

Where Are The Markets?

The main reason for the relatively small increase in Asia is the fact that many Swiss
producers have opened their own companies in Asia. This is very much the case for the Swiss textile
machinery industry. Virtually all important Swiss textile machinery suppliers have their own
production sites in Asia, mostly in China or India.

As mentioned before, in general, the Swiss textile machinery industry is looking forward to a
promising future. All companies interviewed for this report declared that they are more or less
happy with the year 2012. The first six months were rather difficult, but the second half was much
better, itema reported. Remo Dähler, head of sales, Calorifer AG, mentioned that the company’s
Steinemann Central Vacuum Systems business enjoyed a very good year in 2012.

Top exporting countries and regions for the Swiss manufacturers are China, India, Brazil,
Southeast Asia and Turkey. Also important are Japan, Egypt, Bangladesh and the United States; and,
for itema, even Indonesia. However, mentioned Ralph von Arx, managing director of Retech AG, “for
us, as an OEM, the most important countries are Europe and the U.S.” Other countries he named were
Germany and Vietnam.

Some companies have top sellers. Others, like Crealet AG and Calorifer, offer custom-built
solutions. itema mentioned its new R9500 rapier weaving machine is very much in demand. In
addition, the Silver Dynaterry rapier weaving machine is claimed to be itema’s best-selling machine
for terry fabrics. Retech mentioned that thanks to the ever-increasing importance of technical
yarns, its heated godets for technical yarns are very much in demand. For Rieter, ring and, even
more, compact spinning are products that are in very high demand, as are air-jet machines and
complete installations. Reinhard Furrer from Stäubli AG mentioned that automatic drawing-in
machines are very much in demand because delivery times are getting shorter and these machines
support short production cycle times. Jacquard machines are also having great success, as the
demand for top-quality fabrics is still a trend.

To present the versatility of the Swiss textile machinery industry and its peripheral
sectors,

TW
invited the members of the Swiss Mechanical and Electrical Engineering Industries’
(SWISSMEM’s) Textile Machinery Division to take part in a country overview. The results are
published in Table 1 (a link to Table 1 can be found at the bottom of the webpage). 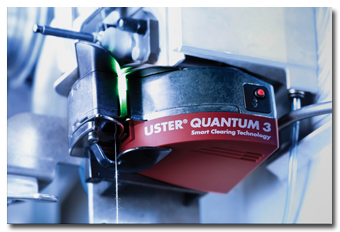 For Uster Technologies, China, India, Southeast Asia, Turkey, Bangladesh and the United
States are the most important markets at the moment.

For 2013, the experts, including economiesuisse, predict GDP growth of some 0.6 percent.
However, there are significant differences among the sectors: The watch industry, of course,
pharmaceuticals and aviation should be the winners. On the other hand, industry sectors like
mechanical, electrical and metal; but also other sectors such as textiles, paper and the plastics
industries will continue to suffer from the crisis in the eurozone.

The Swiss textile machinery manufacturers are confident about 2013, but they have certain
reservations; the same or even better results than they had in 2012 should be possible for most of
them. Rieter says that if the euro crisis ends, the European economy will generate further demand.

The promising markets for 2013 are more or less the same as in 2012: Asia in general but
particularly China and India; Brazil, Turkey; the United States; and the EU.

It seems quite clear for the Swiss that textile mass production will move further toward
Asia, but also to Latin America and North Africa. On the other hand, the demand for technical
fabrics will grow further in Western countries. As Rieter mentions: “Markets will stay dynamic and
volatile. Flexibility and speed will remain very important. Asia with its domestic growth has high
potential.”

And what is the secret of success for Switzerland? For decades, the unemployment rate has
been between 2.5 and 3.0 percent. Swiss people tend to be very independent — this is probably one
of the reasons the country is still not part of the EU. As citizens of a country with limited
natural resources, the Swiss are hard workers. They know very well that success will only come with
hard work and top products. This is also the case for Swiss textile machinery. For 2013,
economiesuisse predicts an unemployment rate of 3.3 percent. This is still very good compared to
other nations. After all, there is no enigma: the recipe is very simple: Don’t talk — work!