In times of troubled waters, it is not an everyday occurrence to celebrate the 125th anniversary of
a company. But such is the case for Jakob Müller AG, Frick, Switzerland, one of the global leaders
in the production of machinery and equipment for making narrow fabrics and labels. In addition, the
Jakob Müller Institute of Narrow Fabrics recently organized the 12th Narrow Fabrics Conference.

During the celebrations for the 125th anniversary, the company announced that Martin Buyle, a
member of the executive management team, has been appointed new CEO of the entire Müller Group, to
succeed Christian Kuoni as of 2013. Kuoni will continue to head the Administrative Board. 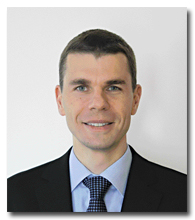 Martin Buyle will take charge as CEO of Jakob Müller in 2013.


One shouldn’t look back too much. However, some milestones in the history of the company are
interesting: Toward the end of the 19th century, in 1887, Jakob Müller-Schneider (Jakob Müller I),
a trained loom carpenter, opened a workshop in Frick and soon began to design his own looms.
Eventually he built the first electrically powered ribbon and narrow fabric looms.

In 1912, Jakob Müller-Kistler (Jakob Müller II) took over the company from his father. During
the difficult period of the 1930s and World War II, the company remained small, but the basis was
provided for later growth. 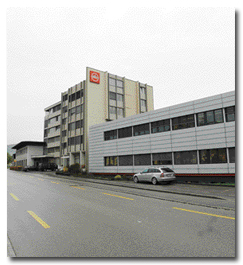 Jakob Müller’s headquarters are located in Frick, Switzerland, where Jakob Müller-Schneider
opened his workshop in 1887.


However, the Swiss border became too limiting for the company. Müller machines have been
exported all over the world, and the development of a global network of locations began with the
opening of a sales and service center in Germany, followed in 1979 by Jakob Müller Italiana S.p.A.,
and Jakob Müller of America Inc. in 1982.

The year 1987 marked the 100th birthday of the company. For this anniversary, it launched the
first rapier label weaving machine, MÜGRIP MBJ1, into the market.

In 1992, there was a change in leadership: Christian Kuoni became CEO of the Müller Group,
while Jakob Müller III remained chairman of Jakob Müller Holding AG.

Following the opening and booming of the Asian markets, Jakob Müller (India) Pvt Ltd. opened
in Bangalore, India, followed by offices in China, Japan and Hong Kong. In 1996, production began
in India; and in 1997, in China. However, the Latin American market became more important,
resulting in new companies being founded in Brazil and Mexico in 2000.

The latest news is that on Oct. 8, 2012, Jakob Müller and Italy-based Comez Gestioni S.p.A.
officially combined their activities in the area of crochet and warp-knitting machines for the
narrow fabrics industry. Comez International S.r.l. remains at its location in Cilavegna, Italy.
Paolo Banfi, head of Comez, reported to Comez customers that the company’s product portfolio and
services are now available through Comez International, and expressed confidence that the merger
with Jakob Müller would enable Comez to improve its technological standards, after-sales service
and quality. “The service of your machines and the delivery of spare parts are guaranteed with the
same efficiency and quality as you have been accustomed to,” he assured them.


For 12 years, the Jakob Müller Institute of Narrow Fabrics has organized the Narrow Fabrics
Conference. In September 2012, the most recent summit of the global narrow fabrics community took
place in Frick. The institute guided the attendees through topics of current interest in the narrow
fabrics area, but also presented issues relating to the global textile industry as such. Speakers
from different sectors of the industry presented their ideas and views about an issue. This year,
Michael Harder, Ph.D., from the Bureau for Interdisciplinary Sciences, Germany, talked about
“Physiconomics — the physical rule for economic success.”

Physicon … — what? Harder explained: “Physiconomics is a new scientific discipline that
applies fundamental insights from complex physics systems to economic relationships. The result is
an overall view of our economic situation which offers a perspective that varies considerably from
the mainstream. Physiconomics shows that our complex business world consists of logical islands in
a sea of risks, probabilities and natural contradictions.”

To put it in somewhat simpler words: Physiconomics is the function of complex systems:
success and failure. Harder said that physics and economics are merged or interlinked and become
“Econophysics and Physiconomics.” His presentation provoked many comments from the audience. 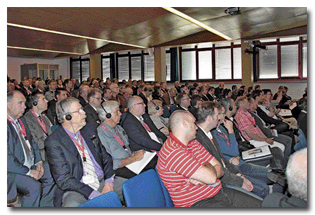 
Peter Driscoll, managing director, PCI Fibres, United Kingdom, spoke about the recent
developments in the man-made fiber market and its links to narrow fabrics. Especially high-tenacity
polyester filament yarn plays a significant role in the narrow fabrics sector, with a market share
of some 15 percent for the production of seat belts. Other fiber types have a market share ranging
between 1 and 2 percent. Driscoll estimates the consumption of polyester high-tenacity filaments is
up to 550,000 metric tons (mt), with polyamide consumption at 65,000 mt, and viscose at some 5,000
to 10,000 mt. He answered the old question about the share of man-made fiber consumption in the
world compared to natural fibers consumption by mentioning that global demand for man-made fibers
increased 5.8 percent in 2011 to 53.2 million mt. Driscoll predicts 2.3-percent annual growth of
all fiber types up to 2020.


Also at this conference, sustainability was in the center of attention. Bernd Dannhorn of the
well-known lingerie producer Triumph International AG, Germany, reported on his company’s road to
premium sustainability. “As the leading producer of underwear, swimwear and homewear, we are fully
aware of the need to produce only such goods that comply with the most stringent user safety
requirements,” he said. In the forefront is the fact that every piece must be traceable to build up
and maintain credibility and confidence. However, he argued that today, there are still no
comprehensive labels and standards that are applicable for all markets. For certain, this matter is
one, if not the, key issue for all activities in the textile industry in the future.