Unlike at any other time in recent memory, the global cotton market is caught in a tug-of-war
between opposing factors that increases price risk exposure, and threatens to keep fiber demand
deferred and supply chains disrupted. These two issues are simultaneously pushing and pulling the
cotton market, displacing market leaders, turning former competitors into customers, and shifting
sourcing patterns in unexpected directions. To be sure, myriad factors are at play. But two
overriding factors of policy and fundamentals are overshadowing the rest and are worthy of a
review. 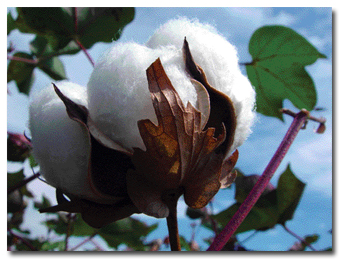 Market Fundamentals From A Demand Perspective


Following last year’s unprecedented roller-coaster surge and collapse in global cotton
prices, once-bitten textile mills are twice shy in their current use of the fiber. Whether hesitant
to book more than the thinnest of coverage for immediate need or hesitant to shift back to
cotton-rich blends because of any price disparity with man-mades, mills worldwide generally remain
timid to use as much cotton as readily as in the past. Presently, the U.S. Department of
Agriculture (USDA) expects global cotton use will only reach 106.3 million bales this marketing
year, well below the 123.9 million-bale record set just a few years ago. What’s more, concern over
a deceleration in global economic growth this year is applying more brakes to prospects for world
cotton mill demand, suggesting the cotton use target may shrink even further in coming months.

Also following last year’s unprecedented roller-coaster surge and collapse in global cotton
prices, the global supply chain witnessed a gradual progression of price pressure moving
sequentially across the supply chain, from fiber to yarn spinners to knitters and weavers to
apparel manufacturers, and ultimately to the store shelf. This evolution of price pressure reached
U.S. shoppers earlier this year, when retail apparel prices surged 5.8 percent year-over-year, the
fastest jump in more than two decades. While retail apparel prices are still higher than a year
ago, evidence in the United States and other key retail markets suggests this price pressure is
exiting the supply chain. The impact on apparel is that, while the dollar value of garment sales in
the United States is set to expand impressively this year, the volume of garments sold is likely to
expand at a tepid pace. A similar trend is occurring in different retail markets around the world.
As a result, weak growth in global consumer demand for clothing is stalling demand growth across
the global supply chain. On balance, whether from a macro perspective or from a consumer
perspective, global demand for cotton remains soft and the medium-term price outlook is tipped to
the downside. 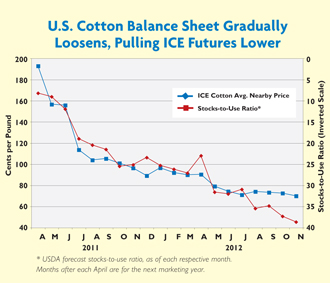 Market Fundamentals From A Supply Perspective


With cotton prices at such lofty levels last year when Northern Hemisphere producers were
making planting decisions, it comes as little surprise that cotton acreage soared and the world
cotton harvest jumped to a record. But with demand increasingly on the defensive and global supply
at a record high, market fundamentals turned increasingly loose. The USDA forecasts the global
stocks-to-use ratio will hit a record in 2012-13 for the second straight year, contributing
fundamental pressure to drag prices lower.

This trend is particularly evident in the U.S. market. Over the last year and a half,
monthly average nearby cotton futures on the Intercontinental Exchange (ICE) sank from more than 90
cents per pound to roughly 70 cents per pound. This gradual erosion happened as U.S. market
fundamentals loosened. That is, the marketing-year stocks-to-use ratio forecast each month over
this period gradually expanded, weighing on prices. Still, near-term prospects hint that more
loosening may be in store for the balance sheet, keeping upside potential for domestic prices
contained.


Another consequence of the 2011 spike and collapse in global cotton prices was China’s
reintroduction of price controls. As the world’s largest cotton producer, consumer, and importer,
China can skew the global cotton market, and this past year was no exception. Just over a year ago,
as Chinese cotton prices were plunging in tandem with global prices, the Chinese government
reinstituted its Reserve procurement mechanism, a scheme designed to stanch the hemorrhaging in
price. The plan is nothing new to China, but the volume bought for the State Reserve was
unprecedented. By buying a record 3.1 million metric tons (14.2 million bales) of domestic cotton
from October 2011 to March 2012 at a preset price of 19,800 yuan per metric ton ($1.42 per pound),
the China National Cotton Reserves Corp. (CNCRC) was effective as never before in stopping the
plunge in domestic prices. This move also contributed to easing the price collapse in other
markets, including the United States.

Yet, to encourage local farmers to plant cotton this past spring, the CNCRC announced in
March a plan to procure even more new-crop supplies this autumn at 20,400 yuan per metric ton
($1.48 per pound). Since beginning the latest round of procurement for the Reserve in September,
another 2.2 million metric tons (10.3 million bales) of new-crop supply has effectively been taken
off the local market. This pace of procurement is well ahead of the volume during last year’s
record-setting procurement period, hinting that the government may buy even more cotton this
season. 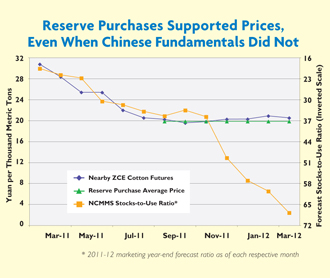 While Chinese farmers praise the policy move, struggling domestic mills complain of thin
supplies on the cash market, prompting many to source yarn from foreign spinners – an ironic
consequence of policy for the world’s largest spinner. But in spite of what looks to be an earlier
crop than last year, precious little of this crop is available at reasonable prices to domestic
mills. Chinese mills complain much of the new-crop supply is being procured for the State Reserve
at elevated prices, with little available for industry. After consuming 51 million bales just a few
years ago, Chinese mills may use 35 million or less this year, a plunge unmatched worldwide.

The aggressive purchases for the State Reserve the last two seasons are causing some unusual
and unexpected repercussions across the global fiber and textile supply chain. For one, Chinese
mills priced out of the domestic market began aggressively sourcing foreign cottons. Already the
world’s largest cotton importer, China more than doubled its appetite for foreign cotton in 2011-12
to an unprecedented 24.5 million bales. By comparison, 2011-12 shipments to Bangladesh, the world’s
number-two importer, were less than 3.2 million bales. Understandably, this sudden demand caused
cotton exports from India to Australia to Brazil to surge to record levels.

Still, the policy move caused China to boost cotton yarn imports to a record level as well.
Over the first nine months of 2012, cotton yarn shipped into China is up 74.6 percent from the same
period last year to a dizzying 1.1 million metric tons. At this rate, Chinese imports of cotton
yarn in 2012 are virtually certain to soar to an uncharted high. Spinners across the subcontinent
and Southeast Asia that once lost global share to China are now gleefully selling unprecedented
volumes of yarn to this newfound market, as Chinese textile manufacturers attempt to avoid the
policy impact of paying prohibitively high domestic cotton and yarn prices.

On balance, the irresistible force of easing global fundamentals is pitted against the
immovable object of a set procurement price for cotton procured for the State Reserve, with the
market sandwiched between the two. Global cotton prices are likely to remain range-bound until
China’s procurement plan fully runs its course later this winter. But relatively cheap cotton and
higher prices for key competitor crops portend a large decline in Northern Hemisphere cotton
plantings in the spring, hinting at a firmer price scenario for the fiber emerging early next year.