Since the invention of the spinning mule, or mule jenny, in 1779 by Samuel Crompton, the textile
machinery industry has worked to develop faster and more reliable and flexible spinning
technologies. Air-jet spinning is the latest answer in this endeavor.

Over decades and centuries, ring spinning became the cornerstone of spinning, accompanied by
open-end or rotor spinning. Both technologies have their own fields of end-uses, and ring spinning
has been boosted further with the development of compact spinning, resulting in much less yarn
hairiness thanks to its reduced, or compact, spinning triangle. In the 1990s, a new technology
appeared on the market: air-jet spinning, the so-called Vortex technology from Japan-based Murata
Machinery Ltd. In October 1997, Murata revealed its development of the Murata Vortex Spinner (MVS),
an air-vortex spinning frame for cotton.


Over time, Murata established a niche market for these special yarns and claimed success for
the technology. Modifications to the Vortex technology in the late 1990s resulted in significant
changes in yarn structure compared with first-generation yarn structures. These modifications
enabled twist to be imparted more effectively to the outer surface of the yarn, which,
consequently, increased yarn tenacity. They also made it possible for the first time to process
shorter staple lengths, such as 100-percent cotton, in addition to man-made fibers and blends. In
September 2008, Murata introduced Vortex yarns at the Expofil yarn fair in Paris. Murata
communicated that “the functionality and fashionable features of the Vortex yarns met the
expectations of the textile professions around the world.” Nevertheless, as spinning is a
conservative industry, the technology wasn’t, and isn’t yet, that successful compared to ring or
rotor spinning, but Vortex yarns maintain their place in a niche market. 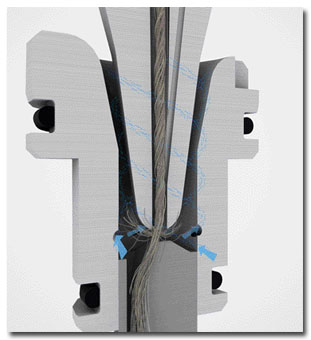 In ComforJet® spinning, the fiber is spun in the spinning nozzle.


In 2003, the Rieter Group, Switzerland, challenged the markets by introducing its own air-jet
spinning technology, beginning with the development of the J 10 air-jet spinning machine. The
technology’s market launch has continued since June 2008. The main development criteria included,
to name just a few: high productivity; flexible, simple machine settings; ease of operation; and
low downtimes for maintenance and lot changes. These criteria determined the machine concept and
the individual components.

At the heart of Rieter’s second-generation J 20 air-jet spinning machine is a spinning unit
driven by individual motors, without central gears and driving shaft, across the entire machine
length. Individual spinning positions can be switched off, and the rest of the machine continues
production. Such spinning unit settings as drafts, bobbin speed, winding tension, cross-angle and
spinning pressure are performed centrally via the machine operator panel. Also, in evaluating
machine data, flexibility is the top priority. Separate production and shift reports are available
for each article.

In Rieter’s air-jet spinning technology, a fiber arc is created by means of an air current,
and the yarn produced in this way is taken off via a fixed spindle. The twist factor in the
covering yarn corresponds more or less to that of a ring-spun yarn. The air-jet-spun yarn structure
consists of core fibers without significant twist and covering fibers with a genuine twist, which
ultimately produces the corresponding yarn tenacity. The specific yarn structure results in yarn
tenacity between that of a ring-spun yarn and that of a rotor-spun yarn. According to Rieter, the
very high yarn tenacity of a compact yarn cannot be achieved by any other spinning system. The
air-jet system virtually totally integrates the fibers into the yarn strand and into the
simultaneous, complete twisting of the fibers.

Due to their yarn structure, air-jet-spun yarns display good yarn elongation values equaling
those of ring-spun yarns, depending on yarn count and raw material. The elongation in air-jet-spun
yarns is also reflected in the yarns’ good processing behavior. 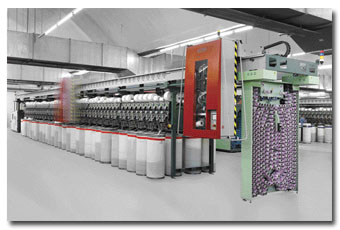 The J 20 air-jet spinning machine has 120 spinning units and is equipped with four robots,
with two on each side of the machine.


Compared to yarn spun using other spinning processes, air-jet-spun yarn displays the lowest
hairiness. The spinning process and the yarn structure obtained as a result create new,
complementary possibilities in downstream processing of the yarn. The advantages of low hairiness
range from cost savings in the knitting process to unique advantages in the textile product in
terms of abrasion, wear resistance, pilling and washfastness.

Yarn abrasion is directly related to yarn hairiness and the integration of the fibers in the
yarn strand. One advantage of air-jet-spun yarn is clearly apparent: Lower abrasion will result in
significantly less soiling and less fiber fly during downstream yarn processing, thereby extending
cleaning intervals on the machines. The abrasion resistance of the yarns is a further important
criterion in subsequent downstream yarn-processing stages and the yarn’s serviceability properties
in the textile fabric. 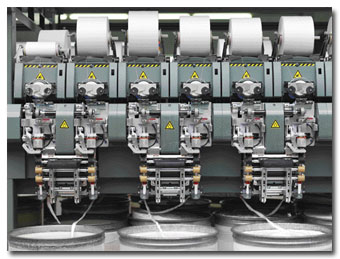 The spinning units on the J 20 air-jet spinning machine are configured in an open
duo-drafting arrangement that is suitable for spinning all fiber types.


A number of innovations incorporated in the J 20 air-jet spinning machine allow it to achieve
delivery speeds of 450 meters per minute (m/min). By comparison, normal ring-spinning delivery
speeds are 15 to 27 m/min, and rotor spinning speeds are 130 to 250 m/min. The Rieter air-jet
spinning machine has a construction similar to that of a rotor spinning machine. Between the drive
frame and the end frame, there are six sections, each with 20 spinning positions, for a total of
120 positions, compared to five sections on the J 10 machine — making the J 20 the longest air-jet
spinning machine in the world, according to Rieter. In addition, there are four robots — two on
each side — in operation for the formation of yarn piecings, bobbin change and cleaning.

Yarn produced by the J 20’s spinning unit features high strength and a low number of
imperfections. The duo-spinning unit’s drafting arrangement can be precisely and reproducibly set.
Controlled fiber guiding results in good yarn quality and a low number of quality cuts and natural
thread breakages. Operator involvement is significantly reduced. Furthermore, bobbin tension can be
set over the entire bobbin, which, in tandem with the image interference device, ensures perfect
bobbin building, Rieter reports. The J 20 machines are equipped with the USTER® Quantum Clearer 2
yarn clearer that can include, per customer requirements, capacitive or optical sensor and optional
foreign fiber detection.


As mentioned above, the J 20 is equipped with four robots, with two on each side of the
machine. In addition to cleaning the spinning position and automatically piecing the yarn after a
thread break or a clearer cut, the robot changes full bobbins and threads up the empty tubes. It
also features a fan that cleans fiber-fly from the spinning positions. The robot is based on
rotor-spinning automation technology. The entire piecing process is electronically controlled. The
machine is designed so that both machine sides are optionally entirely independent of each other.


The duo-spinning unit expands the J 20’s field of application, and it can process viscose,
Modal® and blends of these fibers with cotton. Ideally, a somewhat coarser and shorter cotton fiber
can be chosen for raw material blends on economic grounds. A corresponding reduction in noil can be
achieved when combed cotton is used.

During development of the machine, care was taken to enable as many fiber materials as
possible to be processed using the same top roller cots.


The drafting arrangement technology adopted for the air-jet spinning machine has been adapted
to high speeds. In order to achieve the extremely high drafts, the 3-over-3 drafting arrangement
was further developed to a 4-over-4 arrangement, allowing a gentle fiber drafting in three stages.
The robust arrangement features a unique, patented traversing system. The feed sliver and the yarn
produced as a result are laterally traversed — thus extending the lifecycle of the top rollers,
cots and aprons threefold, which considerably reduces long-term maintenance and spare parts costs
and ensures consistent yarn quality over time, Rieter reports.


For most applications, Rieter claims that the air-jet spinning technology consumes less
energy per kilogram of produced yarn than other spinning processes. Shutdown of individual spinning
units thereby pays off. During development, the dimensions of the J 20 were also considered, to
ensure that the machine could be installed in existing spinning rooms.


The new air-jet spinning technology produces new yarns with new yarn characteristics, and
opens new market opportunities for spinning plants. Yarn formation is achieved by turbulence with
an airflow in a spinning nozzle, which creates a quite different yarn structure. Yarn produced by
the J 20 is marketed under the ComforJet® brand.

Since ITMA 2011, Rieter has begun marketing the J 20 worldwide. The company claims that “the
J 20 is a production miracle with smallest space requirements. With its high operating speed of up
to 450 m/min and 120 spinning units, the J 20 air-spinning machine heads the productivity scale.”

This technology is certainly an attractive alternative to all other existing spinning
processes. However, its market acceptance will show if this assessment is true.