For nearly two weeks, Barcelona, Spain, was not only the capital city of Cataluña, but also the
capital city of the textile world. Three main events challenged one another: the annual conference
of the International Textile Manufacturers Federation, (ITMF), Sept. 19-20, 2011; the World Textile
Summit the day before ITMA 2011, featuring keynote speaker Kofi Annan, former secretary-general of
the United Nations (UN); and ITMA itself, which took place for the first time in Barcelona, from
September 22 to 29. It is not quite certain whether this massive array of events was for the good
or the bad.

One can say that ITMA Europe confirmed its importance as the number-one performance show of
the global textile machinery industry. The extended chapters are an indication of the trend toward
verticalization in the textile industry. This development was confirmed by exhibitors mainly from
the fiber/yarn and fabric sectors as well as finishing. 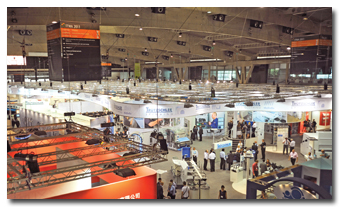 ITMA 2011, held at the Fira de Barcelona Gran Via, presented 1,350 exhibitors showing their
products and services to more than 100,000 visitors from 138 countries.


Exactly 100 years ago, the first ITMF conference took place in Barcelona. At this year’s
event, under the motto “New Paradigms in the Global Textile Industry,” it was quite fascinating to
see that those in the inner circle of the global textile industry are changing their minds about
their businesses and the future of the planet. Such thoughts were inconceivable at the same event
some 10 years earlier. Shortages of water, food and power; and reduced wastewater were just a few
of the topics discussed and presented in Barcelona. Nick Earlam, chairman of Plexus Cotton Ltd.,
United Kingdom, mentioned that cotton is heavily in competition with food and crops such as soy and
corn. “Food before fiber,” as he said, becomes very important, mainly for the Third World, as the
population grows and people need food. Recently, the world welcomed the 7 billionth global citizen.
Earlam predicted that cotton will be much more expensive in the future. “In the next 10 years, we
[will be] moving from an overproduction scenario to an overconsumption scenario,” he added.


Other lecturers emphasized the importance of sustainable production, using key expressions
such as more productivity per unit area of land, optimized use of chemicals, and improved fiber
quality and processing. Natural fibers are competing heavily with man-made fibers, some people
said, but this could be the wrong point of view. Different applications require different fiber
materials. If the fibers go together and combine their advantages, the natural fiber world will
survive in the long run. And, said one speaker, in today’s world of connectivity, nongovernmental
organizations (NGOs) are becoming more important to deal with. They can ask instantly the following
questions: Why is a product developed? How is it produced? Where is it produced? If a company can’t
answer these questions immediately, in the near future, it will be in trouble. NGOs can mobilize
millions of people right away through the Internet.


The day after the ITMF conference, the first World Textile Summit took place. Of course,
everybody was waiting for the highlight of this event: former UN Secretary-General Kofi Annan, who
served from 1997 up to 2006. For many thousands years, Annan said, textiles have been on the way to
globalization. “We are all in the same boat, even in a cruise ship, and we have to take care for
our planet,” he added. He called on the leaders of the textile industry to take responsibility for
their jobs and their people. Welfare is the key to a better world, not poverty. “Doing good is good
for the business,” he said. 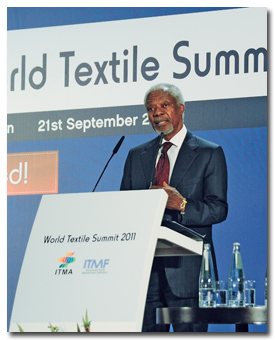 Former United Nations Secretary-General Kofi Annan delivered the keynote address at the World
Textile Summit, held the day before the opening of ITMA 2011.

Annan mentioned the old statement that the cotton industry is responsible for 25 percent of
all pesticides used on this planet. This provoked intense opposition from the cotton industry
leaders who were present, as did his statement that the textile industry is the second-biggest user
after agriculture of water, chemicals and other inputs. People from the cotton trade noted that all
of these figures are prejudiced and should not be mentioned anymore, and definitely not by an elder
statesman like Kofi Annan. He challenged the audience by saying: “OK, go and tell us the truth
about it.” At the end of his statement, he mentioned that free and fair trade and transparency are
vital for the further development of the Third World, including the abolishment of subsidies for
cotton in the Western world.


The greatest textile show on earth took place September 22-29. It was an event full of
unexpected successes. None of the exhibitors interviewed by Textile World expected such a positive
ITMA Europe 2011. Edda Walraf and Reto Thom of Rieter Ltd., Switzerland, confirmed the show’s
success by mentioning the very high quality of visitors. Hermann Selker of Trützschler GmbH &
Co. KG, Germany, said his company welcomed virtually only decision-makers. André Wissenberg of
Oerlikon Textile GmbH & Co. KG, Germany, mentioned that the visitors were very well prepared
and visitor quality was excellent.

But not only were the spinning people pleased, the manufacturers of finishing machinery such
as Regine Brückner, of Brückner Trockentechnik GmbH & Co. KG, Germany; Thomas Archner of Fong’s
Europe GmbH, Germany; and Klaus A. Heinrichs of A. Monforts Textilmaschinen GmbH & Co. KG,
Germany, underlined the show’s success. Heinrichs said that three days before the closing of the
show, Monforts already had 20-percent more visitors than in Munich in 2007. All interviewed people
confirmed that their expectations for ITMA Europe in Barcelona were entirely fulfilled, or even
exceeded.


It was no surprise among the exhibitors interviewed by TW that very few Chinese visitors came
to see the latest innovations. There are some reasons for the absence of the big player in the
textile industry: One is the upcoming ITMA Asia + CITME next year in Shanghai. Other reasons
mentioned by the exhibitors are the recent unpredictable financial market and some visa
restrictions. However, the other Asian countries and the rest of the world were in Barcelona.
Bringing together the visitors’ countries named by all those interviewed, India, Pakistan,
Bangladesh, Turkey, Brazil and other Latin American countries were at the top of the charts, but
people also came from Western Europe — mainly from Germany and Spain — as well as from the Middle
East.

Nevertheless, for all of the interviewed exhibitors, the European market is still an
important one — even more for technical fabrics and nonwovens. But 70 to 80 percent of all exported
equipment goes to Asian countries such as China, India, Pakistan, Bangladesh and Indonesia.
However, for most of the suppliers, this percentage is not that important anymore because they all
have their own domestic production sites in China and/or India.


So what was new? Frankly speaking, not much, with some exceptions, if one looks at spinning,
knitting and finishing. More detailed information about the technology and special features of the
machinery presented at ITMA 2011 is published in separate articles.


Walraf mentioned the new Rieter air-jet machine and a new rotor spinning machine as well as a
second-generation large card. This concept has become standard over the last few years. The top
runner, Thom said, was the air-jet machine.

Selker was happy with the excellent feedback for Trützschler’s new TC 11 card, which is said
to produce 40-percent more than other recent cards. He also mentioned the new foreign material
detector SP-FPU, which works with three different sensor types to extract virtually all foreign
material.

Wissenberg noted that the new Autocoro 8 was Oerlikon Schlafhorst’s top exhibit in terms of
technology and feedback from the visitors. “Energy saving is another topic,” he said. “Quality as
such is not the issue, but how to produce high quality in a tight or small place is important.”


One of the few true innovations was presented by Mayer & Cie. GmbH & Co. KG, the
Germany-based producer of circular knitting machines. The spinitsystems circular knitting machine
has a cylinder diameter of 30 inches and gauge of E28. The idea is to avoid traditional spinning by
replacing conventional yarn with roving, having a yarn count of Ne 0.7. There are 90 feeders, and
the nominal speed of the knitting machine is said to be 30 revolutions per minute. The machine was
presented in a closed room to a limited number of people, and isn’t ready yet to go on the market.


Archner mentioned that automation is the top issue at Fong’s. Most of the company’s finishing
machinery is further equipped with automation to reduce energy, labor costs and, of course, water
and chemicals. In this context, he mentioned the updated model of the Fong’s Jumboflow. However,
the highlight was the Then-AIRFLOW® LOTUS with an L-shaped body. This long-shape machine can
process lightweight material containing up to 50-percent elastane.

For Monforts, heat recovery is one of the hot issues. Heinrichs explained the company’s
automated intelligent system as well as the Matex Eco-applicator. This is an instrument that is
built in just before the dryer element to keep the fabrics as dry as possible.

Brückner mentioned that her company’s new Power Frame Eco drying system was the top runner at
the Brückner booth. “The feedback was extremely elevated thanks to the high level of energy saving
and superior production for lower costs,” she said.

Some Problems And Bottlenecks


Overall, ITMA 2011 was a success. However, some negative points were mentioned by the
interviewed exhibitors. For example, the structure of the halls was not appropriate. There were no
clear signs on the ceilings of the halls. The most significant complaint was made by exhibitors who
had large booths. These companies were placed along the walls, which made, so they said, no sense;
and the decision to arrange the exhibits in that way was said to be rather strange.

And there is still the strange fact that absolutely nobody among the interviewed people likes
the fact that ITMA Asia is held every two years. “But what can we do?” one exhibitor said to TW,
“We have to be there, and it’s ITMA owner CEMATEX [the European Committee of Textile Machinery
Manufacturers] that decides, and not we, the involved people.”


The next ITMA Europe will be in Milan in 2015. The press left the presentation announcing
Milan as the location of ITMA Europe in 2015 with some mixed emotions. It will take place later in
the year — November 12-19 — at the Fiera Milano (Rho). None of the interviewed people – not only
the exhibitors but also visitors – likes this timing. And now, everybody can prepare for the next
ITMA, this time in Shanghai. It’s just a few months away, in June 2012.