The Federative Republic of Brazil is the largest country in South America, and one of the
richest countries in terms of natural resources, environment and wildlife. The Federation is formed
by the union of the Federal District and 26 states.


Today, the Brazilian economy is the world’s eighth-largest by nominal gross domestic product
(GDP) and the 10th-largest by purchasing power. The country is one of the largest domestic markets
in the world and one of the fastest-growing economies today. That’s why it is a member of the G20,
but also a member of the United Nations and the Southern Common Market (MERCOSUR).

The Organization for Economic Cooperation and Development (OECD) predicts an economic growth
rate of 6.5 percent in 2010 for Brazil – higher than the previous estimate of 4.8 percent. For
2011, the economy is expected to grow 4.5 percent. The effects of the international financial
crisis caused the economy to contract by 0.2 percent in 2009.

The OECD is not the only institution to predict a high growth rate for Brazil in 2010. In
the most recent Focus market survey, the Brazilian financial sector projected 6.46-percent growth
for this year. The Brazilian government’s most recent estimate is 5.5-percent growth. According to
the OECD, Russia, India and China – the other countries in the BRIC group – are undergoing a solid
expansion as well, and will register positive figures this year. 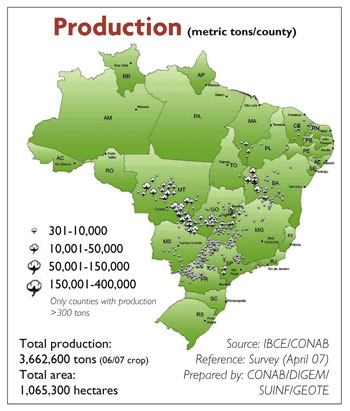 
Brazil is the fifth-largest producer of cotton, after China, India, the United States and
Pakistan (See Table 1). The yield per hectare of cotton is rather high in Brazil, especially in the
state of Mato Grosso.

The Brazilian textile industry is constantly growing owing to the acquisition of modern
equipment and technical development applied to production, and also the promotion of its
professionals through training programs and increasing productivity. This development program has
already invested more than $8 billion. Its objective is to strengthen Brazil’s textile industry in
the globalized and competitive market.


The Brazilian Textile and Apparel Industry Association (ABIT) represents the integration of
the Brazilian textile chain. Founded in the early 1960s, ABIT sponsors companies in every segment
in the textile industry, including cotton growing, synthetic raw materials, textile fibers,
spinning, weaving, knitwear, dyeing, printing and apparel. ABIT participates actively in the
evolution of the textile sector. A pioneer in the industrialization of Brazil, the textile sector
stands out within the domestic economy. ABIT also coordinates relevant initiatives in the social
and environmental arenas, besides sponsoring the sustainable growth of the industry.


Created in 2001, the Brazilian Textile Chain Strategic Program (TexBrasil) – developed by
ABIT in partnership with Apex-Brasil, the country’s export promotion agency – states its mission is
to support and prepare sector companies to present, in an organized way, Brazilian products in
international markets. Using various tools and actions, it aims to increase the platform of
Brazilian export companies, encouraging their inclusion in the global market.

In 2009, the total turnover for the textile sector was $47 billion, and exports exceeded
$1.8 billion. During the same year, the sector generated a deficit of $1.5 billion and created more
than 66,000 job openings. In terms of consumption, Brazil holds fifth place after China, India,
Pakistan and Turkey.


Intensely investing in the excellence of domestic production, the textile sector intends to
expand its operations. The domestic Brazilian market comprises 190 million consumers. In addition,
the textile sector aims to recover its 1-percent share of the world market, which is equivalent to
increasing the volume of exports to $4 billion per year. For 2010, the Brazilian textile industry
expects to grow beyond the GDP and predicts an increase in consumption of textiles in the order of
12 percent.

These are ambitious targets, but by paving the way with adequate planning, such goals are
surely compatible with the Brazilian reality. To achieve such aims, new investments in technology
will be essential. Moreover, the country relies on the required managerial maturity as well as the
creativity of its professionals. Within such a context, it is essential for the textile sector to
join efforts and multiply convergences and know-how. ABIT supports such missions and offers the
Brazilian textile market all the necessary support to meet the above-mentioned goals.


But Brazil plays a growing role not only with regard to cotton and apparel. To produce more
value-added products, many Brazilian apparel producers are heading toward more fashionable fabrics
and products. To support these activities, the second Première Brasil, a major Latin American
textile industry event, took place in July 2010 at the Transámerica Expo Center in São Paulo. The
show presented Fall/Winter 2011 collections of fabrics, yarns, fibers and accessories. It was
supported by TexBrasil, the Brazilian Association of Fashion Designers (ABEST) and Sinditêxtil-SP.
The event is a joint venture between Paris-based Première Vision S.A. and Brazil-based Fagga
Events.

The second edition gathered 67 exhibitors from eight countries, including Brazil, France,
Spain, Italy, Turkey, England, Germany and Uruguay. Compared to the first edition, there was a
49-percent increase in the number of exhibitors.

Jacques Brunel, managing director, Première Vision S.A., Paris, said the event provided to
Latin American countries an alignment with the international fashion calendar, presenting one year
in advance the range of colors and fabrics for future collections. He also said the first Brazilian
edition of the event helped reinforce the perception of strengthening the Latin American market and
textile sector, pointing to Brazil as a starting point for expansion.