E
fficient power usage in the manufacturing environment is essential for containing and, in
some cases, reducing costs; improving productivity; and leveraging the latest available
technologies. Whether for lighting; air compressors; heating, ventilating and air conditioning
(HVAC); electric motors; or aspects of the production process – managing power usage is worth
serious consideration. Large facilities with deep plant engineering capabilities often build energy
efficiency into their planning as well as retrofit programs. Small to mid-sized companies, however,
often need help navigating such projects, particularly if a project is funded by a grant or is
eligible for tax credits. 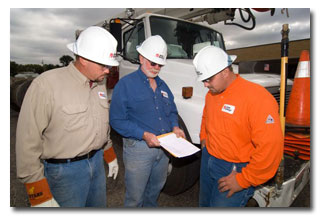 Power suppliers may offer a wealth of resources to customers seeking to reduce costs by
improving the energy efficiency of their operations.


Rich Philip, manufacturing market segment manager of Charlotte, N.C.-based Duke Energy
Corp., says help may lie in the hands of the very people who supply the facility’s power. “It is in
everyone’s best interest to make the businesses in the five states we serve as competitive as
possible,” Philip said. “Start with the resources available, like those tools offered on the Duke
website,
www.duke-energy.com. Larger accounts have the benefit of
an account manager, but smaller companies can also tap into the knowledge and experience of their
service provider.”

In many smaller companies, it is often necessary to bridge the gap among plant management,
the plant engineering area and the company’s finance area to make a project successful, Philip
noted. He cited several areas of interest for textile manufacturers, including drying and curing
processes.

“When you save BTUs [British thermal units], you save money,” Philip said. “In some cases,
replacing some or all of a gas-fired process heating installation with the use of electric infrared
can make a measurable difference – not just in energy savings, but also in reductions of throughput
time. You might consider it for preheating or for the entire process.”


Lighting is a common target for energy savings. “There is more to it than simple savings,”
Philip said. “The transition from sodium vapor to metal halide to the current technology available
with T5 lighting can save more than 100 watts per fixture per hour, but also can have a dramatic
effect on the work environment.”

T5 tubular fluorescent lighting technology – “T” stands for tubular and “5” for the number
of eighths of an inch in the bulb’s cross-section – entered the market in 1995 and presents
opportunities in that, in certain configurations, it is quick to light and can be dimmed. The light
quality is often thought to be more pleasing than sodium vapor or metal halide.

“We still deal with the issue of atmospheric versus process lighting,”  Philip
continued, “but T5 has broad diffusion and is very tunable. The quick-to-light aspect lets us save
additional money by installing motion sensors to light areas only when they are occupied. In a
traditional application, sodium vapor or metal halide would stay on the entire shift.”


“High-efficiency motor programs can be very important in the textile industry just because
of the large quantity of electric motors in certain operations. High-efficiency motors tend to
operate 2- to 8-percent more efficiently than standard motors, and to qualify as a high-efficiency
motor, they must meet or exceed the efficiency levels specified by the National Electrical
Manufacturing Association’s MG-1 standard for motors and generators,” Philip said. “Installation
can pay back in as early as two years and have a positive impact on the long-term operating costs.”

Literature provided by Duke Energy states: “[M]otor systems consume approximately half of
the energy used in the commercial and industrial sectors. Improving the efficiency of motors, and
the systems they drive, can save substantial amounts of energy and reduce operating costs.
High-efficiency motors do cost more, but many models can offer a return on investment within two
years. The cost of operating a motor in the first year is often several times the purchase price.
Reducing operating costs through the purchase of higher-efficiency motors can offer a substantial
payback. For example, an energy-efficient, full-load 50 horsepower motor with 75-percent load
factor can save approximately 4,000 kWhs [kilowatt hours] per year over a standard model. At $.06
per kWh, that can lead to a savings of $240 per year.”

“Cost savings are a part of the decision of whether to replace an operating motor with a
high-efficiency model, replace a motor that has failed with a high-efficiency model or simply
rewind the current model,” Philip commented. “You might also consider adjustable variable speed
drives.”


“Certainly, motor efficiency applies to compressors as well, but there are other things to
consider,” Philip said. “Many times, new air compressors have been added over time as demand has
increased, and it is worth looking at combining capacity of multiple systems to increase
efficiency. Another area is variable speed technology and, finally, compressed air storage – which
can act as a buffer on demand.”

Technology and government standards also have driven improved efficiencies in HVAC systems.
“It often comes down to better chillers and control, putting conditioned air when and where you
need it,” Philip said. “It is certainly a big challenge of the textile industry, and some processes
are very sensitive to managing the manufacturing environment.”


“We just completed a project in Indiana with a large manufacturer, and it was a process of
performing audits, ranking perspective projects, determining cost effectiveness and prioritizing
the implementation.” Philip said. “In the current financial state, cost savings go a long way in
improving the economic viability of some manufacturing facilities. We also need to keep an eye on
the various aspects of the economic stimulus package [passed by Congress in February 2009] that may
help with funding, as well as programs the United States Department of Agriculture offers that
assist rural locations. Grants and low-interest loans can increase the financial effectiveness of
these various projects. At Duke, the competitiveness of our customers is essential to the success
of our five-state territory, and a lot can be done to make sure we are manufacturing as efficiently
as possible.”