W
hen leaders of the National Council of Textile Organizations (NCTO) met in Washington for
their annual overview of the industry, they saw some encouraging developments have occurred in the
past year, but they also face a number of major challenges – the most daunting of which is a
five-letter word – C-H-I-N-A.

NCTO Chairman D. Harding Stowe, R.L. Stowe Mills Inc., characterized the meeting as
“generally upbeat,” as industry executives discussed a wide range of issues and some of the
problems that lie ahead. Certainly, the most serious challenge is how to deal with the impact of
the elimination at year’s end of the safeguard quotas on 31 categories of textile and apparel
imports from China. On the plus side, NCTO officials see the textile economic assistance subsidies
contained in the new Five-Year Farm Bill as something that should improve the competitiveness of at
least some segments of the industry. They also are pleased that recently negotiated free trade
agreements (FTAs) appear to have established a pattern for effective rules of origin that require
the use of US yarn and fabric in products that receive preferential trade treatment, and they see
some signs that Congress and the Bush administration are facing up to the realities of free trade
versus fair trade.

NCTO officials were pleased with some progress in combating what they see as a wide range of
unfair trade practices by China. As a result of pressure from textile manufacturers and other
industries, the Bush administration took some key steps toward combating illegal trade practices.
It reversed a 20-year practice whereby the US government refused to allow anti-subsidy cases to be
filed against non-market economies, something textile manufacturers have been advocating for years.
Two other key developments were approval of a countervailing duty case against Chinese paper
products and initiation of a countervailing duty against steel imports. Both of these cases present
the possibility of similar actions against apparel imports. And the administration has been
successful with intellectual property violation cases brought before the World Trade Organization
(WTO). 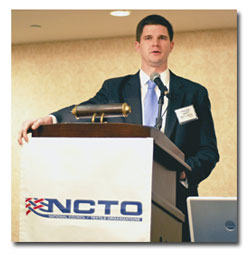 At NCTO’s annual meeting, R. Matthew Priest, deputy assistant secretary for textiles and
apparel at the Department of Commerce, reported on the Bush administration’s trade initiatives.

The $307-billion Five-Year Farm Bill had become everything but a “farm bill” by the time it
reached the full House and Senate. It was loaded with a number of pet projects for members of
Congress, including a textile competitiveness program, that made it so politically popular that
Congress succeeded in overriding a veto by President George W. Bush.


Under the textile economic assistance program, mills will receive payments of 4 cents per
pound for every bale of cotton they open during the first four years of the program and 3 cents per
pound in the final year. It is estimated that these payments could amount to $75 million or more a
year. The payments will have to be invested in plant and equipment modernization to help make US
manufacturers competitive.

NCTO has been actively pursuing government policies to help offset what they see as a huge
competitiveness advantage resulting from China’s refusal to permit its currency to float against
the dollar and other currencies. Among other measures, it has been backing the Ryan-Hunter Fair
Currency Act, which incorporates both anti-dumping and countervailing duty remedies to address
currency misalignment. Although Congress has not acted on the bill, and it likely will not this
year in view of opposition from President Bush, the NCTO leadership believes they have built a
solid base of support for the next Congress. They say they helped supply one-quarter of the
co-sponsors of the current bill in the House.

In a pointed presentation, Dr. Peter Morici, a professor of international business at the
University of Maryland and a highly regarded authority on international trade, demonstrated how
China’s refusal to let its currency appreciate is upsetting world trade and how it is contributing
to the soaring US-China trade deficit and wiping out manufacturing jobs. Morici summed up the
problem by saying, “When trade barriers are removed, the benefits of free trade are upset by
currency manipulation.” Noting that the WTO is supposed to foster reciprocal trade, he said it is
difficult to achieve that goal unless everyone abides by the same rules. “If we really had free
trade with China,” he said, “the textile industry would be OK.

“When we removed trade barriers, as we did in the case of China, we have an imbalance in
trade, and exchange rates are supposed to adjust when barriers are removed. When that does not
happen, you get an avalanche of imports, which is just what is happening today.”

While Morici believes the Chinese currency issue presents a major problem for US
manufacturing industries, he warned that he does not see any quick fixes, although he believes a
countervailing duty law that recognizes currency manipulation as an unfair trade practice would be
helpful. He does not foresee any major turnaround, because powerful multi-national companies are
influencing US policies, and since they have a stake in doing business with China, they are not
likely to do anything that might upset the Chinese. In order to force a change in US trade
policies, Morici said, import-impacted industries such as textiles and apparel need to “get tough
with elected officials.”

In that regard, Stowe said the organization is making a major effort to beef up its political
action committee in the midst of what he called “an historic election.” He urged members to “not
only consider what these elections mean to each of us individually but also what this means for our
businesses and the workers we employ.” 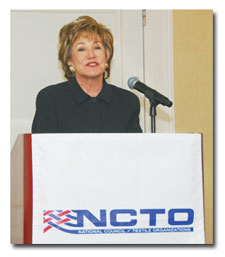 NCTO Vice President Mike Hubbard gave an upbeat report on the association’s customs fraud
reporting operation initiated this past year in cooperation with US Customs and Border Protection.
An online system enables textile companies to report what appear to be customs violations they
encounter in the marketplace and pass the information on to Customs through NCTO. Hubbard said a
number of shipments have been held up in the past year, and $600,000 in back duties have been
assessed. “We knew there was cheating going on, and this system has enabled companies to make
confidential reports that can help streamline Customs enforcement,” Hubbard said.

He reported that a Government Procurement Committee is working on ways to streamline textile
and apparel purchases by the military and to strengthen and expand the so-called Berry Amendment
that requires the military to buy American whenever products are available from the domestic
industry. NCTO is working with members of Congress to expand the Berry Amendment principle to
Department of Homeland Security agencies.

In order to address ongoing issues – particularly with the removal of the safeguard quotas on
China’s imports – NCTO’s Trade & Economic Policy Committee under the chairmanship of Allen E.
Gant Jr., Glen Raven Inc., will deal with a number of approaches to improving the textile trade
picture. These include finding ways for textile manufacturers to have standing in countervailing
duty cases involving apparel, because textile manufacturers are impacted by unfair trade practices
in apparel trade. NCTO is promoting the idea of worldwide “801” trade agreements where duties on
imported garments would be levied only on the value added in the exporting country if they use US
yarn or fabric, and the organization will continue to press for FTAs that have rules of origin
favorable to US manufacturers.

The organization also is spurring a stepped-up effort to gain approval of the Ryan-Hunter
currency reform bill in the next Congress as one way to deal with unfair trade from China.

“We want to make sure we have the tools we need to promote fair trade and to seek out
opportunities to expand business,” Gant told

Textile World
. “We believe there are opportunities out there, and we will be working on ways to take
advantage of them.”