T
he issue of energy savings is currently a big topic worldwide. The discussion is also
very much in vogue in the textile industry. The energy cost factor has always played a significant
role in the production of textiles. Globalization under fierce competition has resulted in low
market prices for yarns, thus lowering margins. By contrast, energy costs have experienced an
increase of approximately 50 percent over the past 10 years.

Consequences today: Those who ignore energy-efficient production will not survive in the mass
market. Concerning the future, the following applies: Energy costs will continue to climb because
fossil fuel quantities are finite. Even though new supplies continue to be discovered, development
and extraction are becoming increasingly expensive. Alternative energies, such as sun, wind, water
or regenerative sources are not yet competitive without subsidies. Their time will come, at the
latest after current energy costs have doubled. Specialists predict such a price level by the year
2020.

This simple formula allows an introduction of the topic by means of a cost analysis. When
looking at the structure of manufacturing costs for a carded yarn in the spinning mill, it soon
becomes obvious that 72 percent of the manufacturing cost is found in the spinning process
(See Figure 1). Only 28 percent of the total manufacturing cost is needed for spinning
preparation. A breakdown of the cost structures according to resources produced in the blow room
and carding, illustrated in the second chart shown in Figure 1, quickly shows the point at which
suitable energy and cost savings are the most efficient.

Particularly in spinning preparation for cotton, the hidden energy waste must be considered
in addition to the pure energy costs. Often, part of the waste is refed, creating further energy
consumption for waste fibers. Reduced waste quantities increase the output and consequently improve
the relationship between energy input and production. Energy savings can be divided into three
areas:

•    reduction of waste portion without quality loss; and

The simplest formula for saving energy and overall costs is the production increase per
production unit. To date, spinning preparation machines work mainly on the basis of mechanically
active principles — for example, gravity, friction, positive locking and centrifugal force. Such
machines have high idle losses. What are idle losses? When operating a textile machine without
production, the average incurred energy costs are already 60 percent, as compared to full
production capacity utilization. Increasing production definitely saves energy. For example: On two
production units, there is a 2 x 60-kilowatt (kW) no-load output plus a 2 x 40-kW pure production
output, which results in 200 kW total consumed output. If production is doubled to 1,000 kg/hr on
one unit, there is a 1 x 60-kW no-load output plus a 1 x 80-kW pure production output for a total
consumed output of 140 kW. In this case, energy savings of 30 percent are achieved
(See Figure 2). This simple formula is well-known by machinery and textile manufacturers;
nevertheless, it is not a great innovation. The enormous challenge lies in the development of
methods to increase production without losing quality and energy efficiency.

With regard to the data shown in Figure 1 and the distribution of costs for resources in
spinning preparation, it quickly becomes evident that the resource waste becomes more and more
important, and thus accounts for a significant share of the manufacturing costs. To prevent a loss
of quality, cleaning elements are intensified, particularly by increasing production. Germany-based
Trützschler GmbH & Co. KG has applied intelligent solutions to its products to help reduce
energy waste while maintaining quality.

Waste control in the blow room: For the roll cleaners CL-C1, CL-C3 and CL-C4, Trützschler
offers Wastecontrol for the blow room. A sensor checks the waste quality and automatically decides
the setting of the separation point. Depending on material and production size, the amount of
separated waste is only as much as necessary for efficient cleaning. In practice, Wastecontrol
quickly results in savings of $50,000 per cleaning unit per year without any loss of quality.

Waste control at the card: The card offers the highest degree of cleaning in the cotton
spinning process. Intensive cleaning results in high amounts of wasted energy. Every specialist
knows that a decrease in production causes an increase in relative waste
(See Figure 3). The reason for this is the approximately constant absolute waste quantity,
independent of production. To conserve energy, a large working width is considered critical. If a
production gain is achieved corresponding to working width, then the relative waste quantity
remains constant. If the production gain is less, more relative waste is separated.

Carding concepts in the market have 1- or 1.5-meter working widths and are operated in
spinning mills with similar outputs per production unit. Principally, on a machine with 1-meter
width, fewer good fibers are separated because of the higher production ratio per meter; therefore,
this concept offers higher resource conservation. 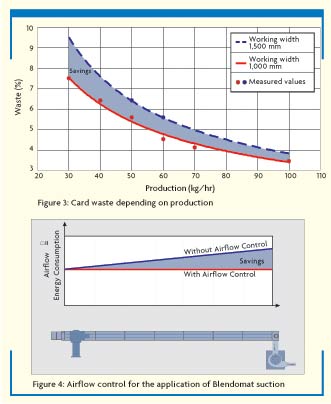 Only as much air as actually needed in the blow room: Trützschler’s Airflow Control is
already state-of-the-art. In the bale breaker process, air quantities are kept constant during
continuously changing suction lengths, thus lowering the average transport air quantity and
reducing the costs for disposal of dust-laden air
(See Figure 4).

Waste suction: When looking at cards and comparing a 20-year-old model to a current model, it
becomes evident that between 1988 and 2008, the energy consumption of just the disposal air
quantity alone has been reduced by more than 50 percent
(See Figure 5). In this case, the customer benefits from the increased productivity as
well, though also from intelligent individual measures. All air-carrying elements on a Trützschler
machine are optimized
(See Figure 6). By adjusting the cross sections of flow by means of finite element
calculation for example, it has been possible to reduce the negative suction pressure within the
last 20 years from 1,200 to 700 Pascals.

When comparing these technologies in reference to energy consumption, the following must be
stated: The supplier’s information concerning energy efficiency of drive systems always is in
relation to nominal loads at nominal speeds. When values drop below these levels, each drive system
loses efficiency and, in turn, energy efficiency to a greater or lesser extent. This means
operating a drive system at full load saves energy. But this also means that the popular approach
of integrating safety and power reserves in a drive concept uses only unnecessary energy. The ratio
of installed output to actual input, therefore, should be as close as possible. The efficiency of
the alternating current drive in particular is on a significant lower level compared to an A/S
synchronous drive
(See Figure 7). 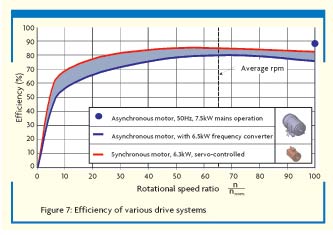 Thus, for speed-changing drives, Trützschler decided more than 15 years ago in favor of servo
technology, which offers good efficiency at varying maximum speeds. Even though today’s
developments, for reasons of comfort and control, often use a frequency converter to enable a speed
change by means of control input, and not by exchange of a belt pulley, it must be noted that this
comfort is at the expense of additional energy. This, among other things, is made clear by the fact
that in addition to the actual asynchronous motor, which should be driven in a speed-changing
manner, a control unit corresponding to the output must be installed. On this control unit, the
additional energy consumption is only noticeable in the form of heat generation.

The future belongs to those textile manufacturers that currently intensively deal with the
energy cost factor. The same applies to the machine manufacturer who is expected to develop
energy-efficient technologies and make them available to the market.