C
otton data, when analyzed over the five-year time series from the 2000-01 through 2004-05
marketing seasons, illustrate the global shifts in the development of cotton production and the
growth of the textile industry represented by cotton consumption. China, India, Pakistan, Turkey,
the United States and Brazil lead the world in both cotton production and consumption. But
significant markets for consumption, like Indonesia, Thailand, Mexico and Bangladesh, point to
growing usages not supported by domestic production.

In terms of exports, Uzbekistan is second to the United States in global cotton exports. The
Africa Franc Zone, Australia, Syria, Egypt, Turkmenistan, Tajikistan and Kazakhstan are not to be
ignored as significant suppliers some with the potential for developing a domestic consumption
base.

There is much more to the global cotton story than simply matching a country’s cotton
production with its cotton consumption. Cotton shipments span the globe, with cotton traded and
purchased to meet the quality and production needs of industry. Domestic production may not meet
the consumption criteria of a country, and imported cotton may be necessary to meet those demands.
However, growth rates of a country’s supply and consumption of cotton do shed some light on the
shift in both the global business of growing cotton and the global business of textiles.

Increasing consumption rates clearly illustrate the growth in the cotton sector of a
country’s textile industry. Increases in cotton production when there is a lack of domestic
consumption point to a country’s development as an exporter of cotton fiber.

Although some people may assume that a country’s economic development level may influence
whether the country is a cotton supplier or cotton consumer, this is an assumption not
substantiated by the data. Such an assumption is falsely based on the idea that agriculture and
manufacturing do not share at some level in the improvement associated with the development level
of the country. There are efficiencies in the consumption and production of cotton that dictate
activity levels in these separate yet linked industries.

A domestic supply of quality cotton is a competitive advantage for a domestic cotton textile
industry. The market factors facing this consumption, however, can negate that competitive
advantage. This is illustrated by the United States with falling consumption and a developed
country with rising production. 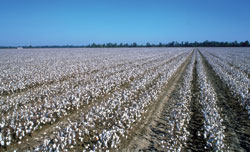 China, India, Pakistan and Turkey collectively consumed 50.3 million 480-pound bales of cotton
in the 2000-01 marketing season, accounting for 54 percent of the total global consumption of 92.3
million bales for the season.

On the supply side, China, India, Pakistan and Turkey collectively increased output from 48
percent, or 43 million bales, to 53 percent, or 63.5 million bales, of the total global cotton
supply during the measured period — from the 2000-01 season through the 2004-05 season. 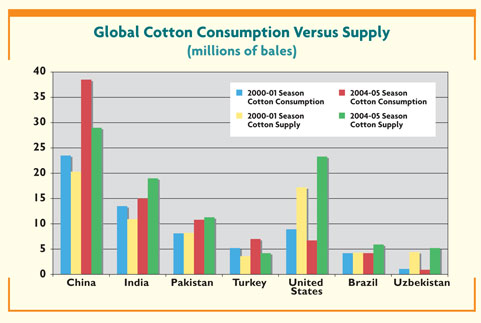 China is the world’s largest consumer and producer of cotton. Early figures for 2005-06 point
to continued expansion.


Pakistan On The Move


Consumption And Supply Rise In Turkey

As economies continue to develop, the rising appetite for consumer goods should bode well for
the future of cotton. Innovations related to both the growth and the consumption of cotton continue
to expand the possibilities for this ancient fiber. Textile manufacturing systems continue to
advance, creating the necessary flexibility to increase quality as well as yield. Textile finishes
show promise in providing consumers with durability, performance and aesthetics, which aid in the
marketing of cotton products and satisfy the demands of a growing marketplace.