W
eavers from across the country were treated to a glimpse of the latest technology at a
recent open house hosted by Belgium-based Picanol NV and Global Textile Partner (GTP) Greenville
Inc. – the US headquarters of Picanol’s Belgium-based GTP operation that produces weaving machinery
accessories, and which provides service and sales of spare parts for Picanol weaving machines in
the United States. 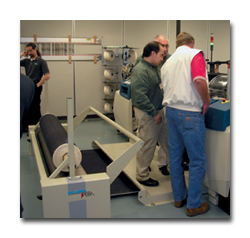 A recent Picanol/GTP event offered attendees a look at new Picanol technology and a tour of
Steel Heddle’s facilities.

Patrick Steverlynck, chairman and CEO, Picanol Group, set the tone for the day by stressing
his family’s commitment and involvement as the majority stakeholder of the company. Steverlynck
spoke of business conditions that include weavers delayed investment plans related to World Trade
Organization issues and US dollar-versus-euro exchange rate challenges; but he also focused on a
customer orientation by Picanol that features innovation, cost control and collaboration.

Philip Gilliland, quality manager of GTP worldwide accessories, spoke of the proud heritage
of Steel Heddle acquired by Picanol in 2001 dating back to 1898 and a history of innovation
featuring some 200 patents. He also mentioned that GTP Greenville underwent a multimillion dollar
investment campaign in 2004 that allowed it to improve the quality of a number of products while
increasing capacity at the same time. 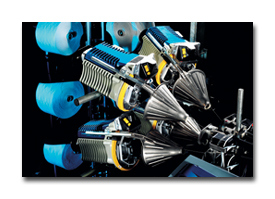 The new OMNIplus 800 (top) from Picanol features optimized insertion preparation for up to
eight colors or yarn types (bottom).


At center stage, Jan Maes, international sales manager, Picanol NV, presented the new
OMNIplus 800 air-jet weaving machine with the ease of a man who has spent years with the evolving
technology of the company. Picanol launched the first OMNIplus in 2000, but the air-jet legacy goes
back 25 years. Speed, quality and flexibility, according to Maes, are achieved by the air-jet’s
performance, electronic controls and fully modular design. Maes pointed out a number of features.
The real draw of this machine is the flexibility of its new modular design. He noted fast, simple
width changes; warp and cloth roll changes without the need to use additional tools; and the
patented Quick Style Change system, which enables style changes in less than 30 minutes by one
person. The modularity allows for cam, dobby and jacquard motions to be interchanged. Insertion
requires 10- to 15-percent less air consumption, and main nozzle controls run at 4 milliseconds
rather than 14 milliseconds. There also is an updated design of relay nozzles and valves.

The oil-cooled main drive of Picanol’s Sumo motor functions without the standard belt or
clutch and brake, using a short transmission chain. More than 60,000 Sumo motors are currently in
the market on weaving machines.

Weavers are sure to see many presentations of the new design in the coming months.


Steve Brown, regional sales manager, United States, Picanol NV, provided an update on the
GamMax rapier and its optimized rapier motion. The GamMax is capable of accommodating 190- to
380-centimeter (cm) widths (with the exception of the free flight version, which is available in
all widths except 380 cm). Showroom demonstrations of the OMNIplus 800 weaving denim and sheeting,
as well as a GamMax throwing a wide variety of fillings with Maes providing a play-by-play
explanation illustrated just how far weaving technology has evolved through the years
high-technology performance that delivers quality and provides flexibility for changing market
demands.

Tours of the Steel Heddle manufacturing facility gave visitors an up-close view of the care
that is necessary to make and deliver the quality for which the company is known.