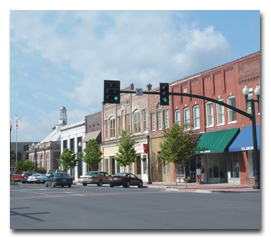 Downtown Dalton offers a number of antique and specialty shops.


V
isitors to Floor Tek Expo 2005 may also want to take in the sights of Dalton, Ga. Located
in Whitfield County – just 87 miles north of Atlanta and 28 miles south of Chattanooga, Tenn., – it
often is referred to by locals as the Carpet Capital of the World. According to the Dalton
Convention and Visitors Bureau, the town’s nickname sprang from a cottage industry that produced
hand-tufted chenille bedspreads, which were displayed and sold along a stretch of road known as
Peacock Alley (The peacock remains a symbol of the city). The success of this industry led to the
development of tufting machinery and subsequent production of tufted carpets.

Points of interest in and around town include downtown Dalton, which affords visitors a number
of antique and specialty shops, as well as Dalton Green and Gateway Parks. Also located downtown is
the Dalton Depot. Used as a railroad station from 1847 to 1978, it now houses a restaurant and is a
prime spot for surveying the city.

Downtown also is the site of the only outdoor statue of Confederate General Joseph E. Johnston,
commander of the Army of Tennessee during the Atlanta campaign.

Other shopping can be had at Tanger Outlets – home to 40 factory-direct stores and the
Carpets of Dalton and American Home Showplace, both located off I-75. Carpet industry tours may be
arranged through the bureau.

Nearby are the Blunt House, built in 1848 for Dalton’s first mayor, postmaster and religious
leader; as well as the Clisby-Austin House Railroad Tunnel, a Civil War historical site and the
oldest railroad tunnel in the South, according to the bureau. The Confederate Cemetery and Monument
contains the graves of 421 Confederate and four unknown soldiers. The cemetery’s monument was
erected by the Civil War Roundtable and lists the names of soldiers who fought for the
Confederacy. 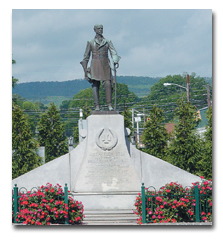 Dalton is home to the only outdoor statue of Confederate General Joseph E.
Johnston.

There are a number of sites to see just outside of Dalton, including the Blue and Gray Trail,
which follows the Civil War’s most dramatic moments from Chattanooga to Atlanta. Thirty-two
commemorative trail markers are located throughout Whitfield County.

Chickamauga National Military Park is the oldest, largest and most visited national military
park, according to the bureau. Attractions include the Fuller Gun Collection, walking tours, and
hiking and biking trails, among other activities.

Spots along the Chieftains Trail, which was dedicated during the 150th anniversary of the Trail
of Tears, allow visitors to see Cherokee Indian villages, homes, mounds, museums and ceremonial
grounds.

Built in 1804, The Chief Vann House was the home of Cherokee Indian Chief James Vann, who
recruited Moravian missionaries to teach the tribe’s children.

Red Clay Park is the site of the last Council Grounds of the Eastern Band of the Cherokee
Indians. Visitors to the park may tour a museum of Indian history and displays featuring daily
life, as well as replicas of Cherokee structures.