A
hazardous chemical has spilled from one of the large tanks that a textile facility
maintains on site. Immediately, there is one question that everyone wants answered – is it
dangerous? And on the heels of this question come countless others: Who has cause for concern? What
action should be taken? Do the employees need to evacuate the facility? Do surrounding businesses
and neighborhoods need to be alerted? The facility management is faced with a weighty situation,
and it must respond to the emergency and provide satisfactory answers to this barrage of questions.
The company’s reputation is on the line, liability is enormous, and lives may hang in the balance.
The outcome of all these things rests upon the shoulders of management. This scenario may seem a
bit extreme for one accidental spill, but the reality is that one spill could be devastating to a
textile company and the surrounding community if it is not handled properly. 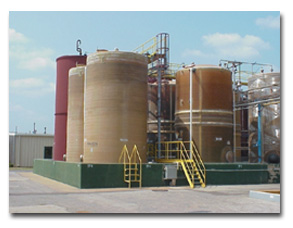 Industrial chemicals can be stored in large tanks and containers on a manufacturing
facility’s premises.


Accidental spills of toxic liquids or releases of gaseous chemicals due to a rupture in a
tank, accidental spills from a transfer line, or releases from compressed gas tankers can have
devastating effects on plant employees and surrounding residents. The list of hazardous chemicals
that can cause serious problems for a textile facility if spilled or released is extensive; and
includes hydrochloric acid, formaldehyde, benzidine, chemical solvents, bleaching agents, dyes,
various acids and countless other chemical products. Whether a facility stores thousands of gallons
of these chemicals in large tanks or merely a few gallons in totes and drums, disaster can result
from a spill. When any toxic chemicals are released into the environment, concentrations of these
chemicals in the air can range from an odor nuisance level to an immediately dangerous to life and
health (IDLH) level. Each of these levels creates a different impact on the facility and its
surroundings, and each requires a different response. The impact area for a specific spill or
release event must be determined using various factors such as the chemical of concern; size of the
release; topography and existing structures in the surrounding area; and a variety of atmospheric
conditions such as wind speed and direction, humidity, and ambient temperature. Depending on the
toxicity of the chemical, response actions ranging from personal protection to evacuation from the
projected impact area may be required. Necessary actions for basic protection may include special
respiratory protection, while more drastic actions may involve evacuation of the facility premises,
or evacuation of residents around the facility if an impact area is determined to proliferate
beyond the facility property.

The textile industry needs to take the danger of chemical spills and releases seriously. One
state regulatory agency states that with so many process chemicals being stored, mixed and
transported at most textile mills, the potential for spills is high. Even seemingly minor spills
can have major environmental impacts. Processes such as scouring, bleaching and dyeing especially
pose environmental problems. Many textile facilities are now using substitutes for hazardous
chemicals, which help protect employees and the surrounding community in case of a spill, but
serious problems may still result in the case of a spill or release, and they need to be addressed
before an incident occurs.


Clearly, being prepared for a crisis spill or release situation is critical, and the most
important question of all then becomes: How can the textile industry prepare itself to handle such
an incident? This dilemma will continue to be faced by countless members of management in plants
across the nation. Contingency planning is the solution to this problem. Having a system that
allows management to know immediately the proper course of action to take is the first step in
emergency response. Plume dispersion modeling can aid in this contingency planning, allowing the
decision-making process to be as easy, clear and comprehensive as possible.

The dispersion model uses complex calculations to determine the area affected by a toxic
release and the chemical concentrations within the affected area. Through numerous iterations, a
Gaussian plume model takes into account the nature of the chemical released as well as atmospheric
factors to determine the dispersion of the release. The characteristics of the chemical released,
such as its density, affect its transport insofar as determining how high above ground the plume
will rise. This plume height affects the diffusion of the chemical at ground level, the location
where the toxic concentration levels are most crucial. Atmospheric considerations such as air
turbulence and wind velocity also will affect the dispersion of the chemical. Plume dispersion
modeling takes into account all of these variables to give an accurate risk assessment for a toxic
spill or release.

A good modeling program at a textile facility deals individually with the various toxic
chemicals stored that potentially could spill and create a hazardous situation. Using predetermined
atmospheric conditions, the location of the spill/release, and various spill/release sizes for each
chemical, the program will compute the concentrations of the different hazardous chemicals in the
air at ground level. Three different impact levels are considered – nuisance odor (half of the
permissible exposure limit [PEL] value), PEL and IDLH. Each chemical’s area of impact at these
different levels is then determined. Once modeling of these scenarios is complete, the computed
results can be applied practically to the development of contingency plans.


Necessary response actions – such as respiratory protection, evacuation of certain areas
within the facility premises, or evacuation of individuals residing in the surrounding community –
can be determined from the results of a good plume model. A textile facility can fully prepare
itself to implement appropriate action in the case of a hazardous spill or release. Conversion
Technology Inc., Norcross, Ga., has developed a modeling program to aid facilities in handling this
responsibility. Using a user-friendly graphical format, the program presents the sizes of potential
spills and releases and their impact areas. The graphs are superimposed on maps depicting the
facility and its surroundings, showing exactly what areas of the facility and community would be
impacted by a spill
(See Figures 1 and 2). Facility management then can easily determine the situations it
must be ready to address.

When a chemical spill or release occurs, facility managers are confronted with the
overwhelming task of determining an appropriate course of action at a moment’s notice, while facing
the concerns of employees, neighbors, community leaders and government officials. The first thing
emergency responders (fire department and health department) will want to determine when an
incident occurs is the immediate threat to people in the area. Having an adequate contingency
modeling system in place provides that information immediately. It is irresponsible to take any
chances when the consequences of an incident can include large fines from government agencies, a
ruined company reputation, and illness and/or death of employees and local citizens – a public
relations nightmare. When disaster occurs, when emergency strikes, it is essential to be prepared
by having reliable information at hand. Fortunately, the development of contingency planning
through the use of a specific plume modeling program has provided a solution to ease this burden on
facility management. By implementing a working contingency plan, a textile company becomes ready to
protect not only its employees, but also the surrounding community when an accidental spill or
release occurs at its facility.