A
standard technique for measuring marketplace maturity is Product Life Cycle Analysis. All
product or service classes progress through four predictable life stages from birth to death –
introduction, growth, maturity and decline. In the introductory phase, products demonstrate great
variety and heavy infusions of innovative thinking. The market is small, and there are few
competitors.

In the growth phase, product success is assured, and prices are declining so as to be
attractive to a wider slice of the population. Despite declining prices, competitors appear to
challenge the leader, because there is now sufficient demand and margin for a few more entrants.
Brand identification becomes important.

In the maturity phase, growth slows or stops; prices drop precipitously; competitors
disappear through failure, merger or absorption under the guise of larger is better; brands drop
away; and innovation evaporates. Industry profits, which peaked early in the growth phase, drop to
zero or negative, and are recognized by frenetic cost cutting in an effort to survive.

Sound familiar? Where do fibers and textiles fit in this continuum between introduction and
decline?

While some colleagues in the contemporary textile industry press are ready to write off the
entire industry as incapable of creating satisfactory profits, a careful reading of the business
press seems to indicate otherwise. Some producers are thriving, some are reinvesting, and a few are
emerging from bankruptcy much stronger than when they entered the court’s protection. Admittedly,
while many investors lost significant dollars in the past five to eight years as the industry
swooned, a few hardy folks are reappearing as active investors in what remains of the US textile
industry. Do these people know something others do not? Is there a pattern in their investments
that can lead us to a new definition of the domestic textile market? As Alasdair Carmichael of
United Kingdom-based PCI Fibers & Raw Materials asked rhetorically at the summer 2002 meeting
of the Textured Yarn Association of America (TYAA), “If this were a sunset industry, … would
there be overseas investment? It is clear that some heads think that textiles in the United States
still is an industry worth [investment].” 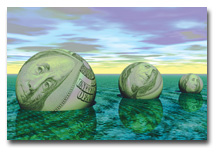 The Securities and Exchange Commission (SEC) Electronic Data Gathering, Analysis and
Retrieval System (EDGAR) website is a jewel for data-mining information about operations, finances
and ownership of public companies.

Several fiber and textile companies were examined to uncover a pattern of outside investment
in the industry.

Textile World
‘s interest comes from trying to balance the historical dominance of private ownership in
textiles against the current need for capital investment to remain world-competitive in the face of
the well-documented import flood. Textile companies, whose futures have been affected by the
investment-numbing problems of stocks with low or no value, and poor markets with low or no
profits, have pushed the industry to the back of the investment capital waiting line. At a time
when directing new investments to new technologies is imperative in global competition, the stars
have aligned to exclude textiles from the party.

Despite this logic, some investors actively are placing significant funds in fiber and
textile companies. 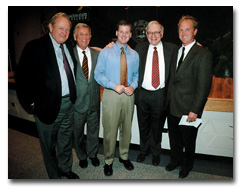 At the risk of generalizing, it is almost fair to say that substantial investment in the US
man-made fiber industry comes from international sources. Except for Kingsport, Tenn.-based Eastman
Chemical Co.’s  acetate, an appendage to the huge volume of cigarette tow, cellulose
production is totally controlled by international firms. Polyester remains US-dominated by DuPont,
KoSa and Wellman, but even these companies are spreading their wings toward outside investment.

In 1998, DuPont, Wilmington, Del., spun off its staple fiber business into DAK Americas,
Charlotte, a joint venture with Mexican petrochemical manufacturer Alfa S.A. de C.V. While
appearing to strengthen DuPont polyester with new investment, the move may in turn have
strengthened other non-fiber DuPont products by passing fiber debt onto DAK.

Two years later, DuPont and Unifi Inc., Greensboro, N.C., announced an alliance to mutually
plan and produce polyester filament yarn. The goals were similar to the DAK transaction (reduce
cost), although the methodology was different. The objective of the alliance was to “reduce
operating costs through collectively planning and operating both companies’ manufacturing
facilities.” Each participant retained ownership of its facilities, but the alliance planned and
operated the facilities in concert. Each participant, through a series of put options, could
purchase the alliance from the other partner. Needless to say, neither DuPont nor Unifi has
exercised the options.

KoSa, Houston, originally was a joint venture of Koch Industries, Wichita, Kan., and IMASAB
S.A. de C.V., a company controlled by Mexican billionaire Isaac Saba, to buy the Hoechst Trevira
polyester operations. The venture was derailed in 2001, when Saba backed out and sold his share to
Koch. KoSa since has taken its total ownership role to heart and remains committed to being “the
‘state-of-the art, lowest-cost producer’ in the markets it serves.”

By way of introduction to nylon, the apparent desire of DuPont to spin off its entire fiber
group must not be ignored. In addition to the polyester alliances, DuPont has nylon 6,6 as its
largest poundage volume product and Lycra® (spandex and non-spandex comfort items) as its signature
marketing approach. Carpet fibers, which represent a significant portion of DuPont nylon products,
have done well and are forecast to continue to do so. Nonetheless, nylon is not a new technology
material and is viewed by the investment market as a drag on DuPont’s avowed metamorphosis into a
high-technology company. Market rumors abound about DuPont’s disposition of the remaining fiber
positions. Because nothing is firm, further comment is not necessary.

Last, but not least, in January, Honeywell, Morris Township, N.J., and BASF Corp., Mount
Olive, N.J., announced a business swap whereby Honeywell will acquire most of BASF’s nylon fiber
business plus cash, and BASF will acquire most of Honeywell’s engineering plastics business. Each
of the two businesses’ revenue streams approximate $350 million, which, when added to their new
owners’ portfolios, brings the resulting businesses to the critical mass needed to compete
globally. Honeywell will trade a relatively small plastics business for a nylon carpet, industrial
and apparel fibers business, which will drive its nylon commitment to more than $1 billion in sales
per year. Unstated in the public announcements, but a logical component of the swap, will be
increased usage of Honeywell’s nylon caprolactam capacity. Additionally, BASF will continue its
retrenchment from consumer products to the upstream industrial markets featured in its advertising
slogan: “We don’t make a lot of the products you buy. We make a lot of the products you buy
better.™”

Consolidations of textile machinery companies make sense in cases where they eliminate
excessive costs, allow customers to easily view and select from many alternatives, and encourage
elimination of the competitive duplication that accompanied the individual companies.

Two mergers come to mind. The St. Louis-based Harbour Group has assembled, under the
Tube-Tex banner, a family of formerly independent suppliers of finishing equipment for knitted
fabrics. Included in the assembly are: Tube-Tex with compaction/drying and padding machines;
Marshall & Williams with tenter frames; JEMCO with continuous bleaching; RFG with raising and
napping equipment; and Ashby, selling fabric-handling equipment for dyehouses. The advantages of
selling multiple lines include extending venerable brand names and establishing the groundwork for
a global business model.

Similarly, Italy-based Itema Group, a subsidiary of the RadiciGroup, Italy, has assembled a
group of companies that manufacture and sell a complete range of weaving machines appealing to a
broad choice of woven fabric constructions. These include Somet and Vamatex rapier and air-jet
looms; Sultex rapier and projectile looms; and the alliance with Toyota Industries Corp.’s
(formerly Toyoda Automatic Loom Works Ltd.) air-jet technology.

Until just recently, the most obvious place to examine textile investments involved the
previously announced bid to purchase Greensboro-based Burlington Industries Inc. by Berkshire
Hathaway Inc. Omaha, Neb.-based Berkshire announced it was terminating its offer after losing a
question in bankruptcy court about the court-mandated Burlington auction/sale of assets.
(See ”
Textile
World News,” March 2003). Berkshire’s interest in textiles is not new. Its legacy in
textiles includes Shaw Industries Inc., Fruit of the Loom and Garan Inc.

Two interesting counterpoints to the Burlington scenario involve the latest actions of
Heartland Industrial Partners L.P., Bloomfield Hills, Mich., with moves at Springs Industries Inc.,
Fort Mill, S.C., and Collins & Aikman Corp. (C&A), Troy, Mich. Historically a textile
company, C&A has moved deliberately toward redefining its mission while still maintaining a
foot in the textile marketplace. Several years ago, the Blackstone Group, a New York City-based
private equity investment company, invested in C&A and started transforming it from a textiles
supplier to a “global leader in the design, engineering and manufacturing of automotive interior
components.” C&A divested its apparel fabric operations and, in 2001, added the automotive
fabric operations of Joan Fabrics to its manufacturing base. Joan and C&A long have had major
relationships with the automotive industry as body cloth suppliers, and these connections formed
the basis of company moves to become a broader supplier of automotive products.

Also in 2001, C&A rounded out its product line by adding two other divisions. It
purchased Becker Plastics LLC, a major supplier of plastic components to the automotive industry,
and TAC-Trim, Textron Inc.’s Automotive Trim Division.

These purchases were financed with additional investment. David A. Stockman, director of the
Office of Management and Budget during the Reagan administration, was a senior managing director of
the Blackstone Group when the original C&A investment was made. In 1999, Stockman was a
founding member of Heartland Industrial Partners, with a mission to “purchase and invest in select
industrial companies … [in] the midwest area of the country.”

In 2001, Heartland, to help pay down debt and finance TAC-Trim, purchased a controlling
interest in C&A and acquired the right to a controlling interest on the Board of Directors.
Stockman’s investment participations at Blackstone featured leadership roles in several “old
economy” firms. It does not appear Heartland will do differently.

Similarly, Heartland participated in taking Springs private and refinancing its debt. Before
the private transaction, the Close family (and trusts) owned or controlled approximately 41 percent
of Springs’ common shares, which represented approximately 73 percent of the voting power of the
same stock. Heartland added approximately $225 million of its own equity to around $1 billion from
J.P. Morgan Chase to raise the Close interests to approximately 55 percent and provide Heartland
with a 45-percent position. Most important, the Close family was able to monetarize its stock
position and still retain control of the company, and was also able to provide valuable capital to
allow the company to restructure and reorganize to face the 21st-century market.

It appears that outside investments in textiles display constancy in two areas. First, the
investment community apparently has not soured on textiles per se. It stands to reason that fiber
and fabric manufacturing for apparel in the United States are under pressure from foreign suppliers
and cause concern for investors. Conversely, the same investment community is displaying interest
in textiles focused on home fashions and industrial end-uses. Smaller lots (including prints)
appear to insulate home fashions from imports. The logistics of shipping carpet likely will
continue to close off this product line from imports. And there is a need for specification-driven
product development alliances. All of these factors will help keep high-value-added textile
products “Made in America.”

Editor’s Note: Most of the data cited in this article comes from an accumulation of individual
reports filed with the SEC.