MONCHENGLADBACH, Germany — September 1, 2012 — High-ranking visitor to Mönchengladbach: Zhang Jie,
Chairman of the China Hi-Tech Group, visited A. Monforts Textilmaschinen GmbH & Co. KG, to see
for himself the latest addition to his group of companies with its worldwide activities. Together
with Monforts Managing Director, Roland Hampel, both performed the groundbreaking ceremony for the
new Advanced Technology Centre that is to be built; which will also serve as a training centre to
attract young people to textile machine engineering.

The China Hi-Tech Group, as the only state-owned textile machine manufacturer in China and
the world’s second-largest textile machine supplier, is the owner of the Chinese Fong’s Group;
which in turn has recently taken over the Monforts shares from the Lübeck-based Possehl Group.

Zhang Jie and Fong’s CEO, Alex Wan, who accompanied him, both emphasised during their visit
that Germany is an ideal centre for research and development. 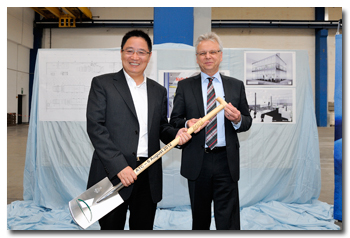 The new Monforts technology centre on the Blumenberger Straße is to go into operation at the
beginning of 2013. With around 1,500 square metres, it is almost twice as large as the old
technical laboratory at the former site on the Schwalmstraße.

“The new centre will feature the Montex 8000, a new coating range that can be flexibly
employed for technical textiles,” explained Monforts authorised signatory, Klaus A. Heinrichs. He
continued, “Monforts aims to further expand this business area, since the market for technical
textiles is booming and promises further growth.

“We will be able to show our customers what Monforts machines are capable of under real
production conditions.”

In addition, a stenter for knitted fabrics and a dyeing range will also be on show in the
technology centre.

Seminars and training courses will also be held. “We want to attract young people to textile
machine engineering and show them that textile finishing is high-tech,” added Heinrichs.

“In Peter Tolksdorf the company already has a long-serving employee in its ranks who is
responsible for the promotion of young talent at the Association of German Textile Finishers and
can therefore approach young researchers directly.”

The Future Of Fibers