For more than 300 years, finishing company Geissbühler & Co. AG has been located in Lützelflüh,
in the famous Emmental valley in Switzerland. With a clear conviction that nothing is impossible,
the company has established itself with perseverance and the right investment policy to be a
reliable and cutting-edge partner for the finishing of technical textiles.Geissbühler’s beginnings
go far back to the year 1673. Consequently, the company is one of the oldest existing finishing
mills in Switzerland. Over the centuries, the small bleaching and dyeing house developed
continuously, while investing heavily in research and development, mainly in finishing and coating
of textiles. 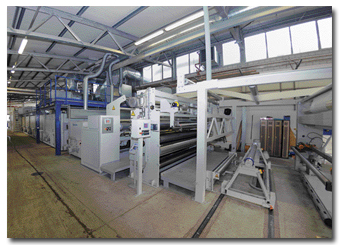 With the new Brückner finishing line, water-based as well as solvent-based coatings can be
applied.


In 2007, Geissbühler was acquired by the Cilander Group, one of the prominent finishing
companies in Switzerland. “For Cilander, this acquisition was the next step to secure its position
as a competent partner for technical textiles; and for Geissbühler, to secure a sustainable
future,” explained Managing Director Kathrin Bohnenblust in an exclusive interview with

Until 2007, the company was led by the eighth generation of the Geissbühler family. “Today,
we are an independent daughter company of the Cilander Group. We now have 21 people working in the
company and have invested 5.5 million Swiss francs in production and peripheral equipment,”
Bohnenblust said. 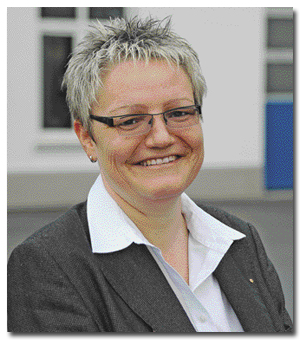 
Geissbühler finishes a broad variety of woven fabrics for various technical textiles
end-uses including upholstery fabrics for trains and buses, fabrics with flame-resistant finishes
for airplane seats, and Kevlar® mesh fabrics for sports car bodies; as well as glass fabrics for
architectural purposes, fire blankets and protective gloves. Other end-uses include protective
shells for buildings, tents, tarpaulins and awnings, roller aprons, sun protection, filter fabrics,
and also coated high-fashion apparel fabrics. For example, Geissbühler finishes fabrics for Indian
turbans. The list can be extended at will. In 2000, the company finished the first world’s first
textile postage stamp. “This product had to be treated like a bank note — it has a certain value,”
Bohnenblust explained with a smile. 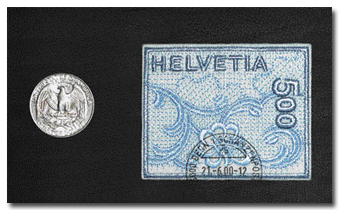 
After 20 years with the company, Bohnenblust became managing director in 2007. In her own
words, she is a “career changer” and a person with many interests. She loves animals, her house and
the garden; and is also active in local politics. And what is the personal challenge in her work?
“Well, basically, the focus of my efforts is to secure jobs. Job security is the big challenge for
us all and is associated with the corporate philosophy: We never say ‘no’ in our job; we always try
to find a solution,” she said.


“I don’t think one should look too much into the past. However,” she continued, “there are
two events that were and are important for the long-term existence of Geissbühler: on the one hand,
the acquisition by the Cilander Group in 2007; and on the other, the purchase of a Brückner coating
line [from Germany-based Brückner Trockentechnik GmbH & Co. KG], which opened up completely new
application areas for our company.”


Geissbühler produces some 1.4 million linear meters per year. And these are real linear
meters — often, the fabric width goes up to 600 centimeters (cm). The year 2010 was very good for
the company, and its fortune lasted well until October 2011. Then, the market calmed down a little
bit. “But we are still at a good level,” Bohnenblust said. “Some 30 percent of all products are
exported to the European Union. Glass fabrics for architectural uses as well as fabrics for
aircraft seats are currently the top runners.”

In 2011, Geissbühler produced 224 new developments and brought them to the market. “This is
the result of our corporate philosophy,” Bohnenblust said. “In our laboratory, the word ‘no’
doesn’t exist. In the lab, we want to find solutions. Flexibility stands above all.” And what is
the minimum quantity for a new product development? “Not that much,” she added. “The average is
1,000 meters for a new product.”


Such a wide product range requires an extremely flexible production system concept. “That’s
why we decided in 2005 to go forward,” Bohnenblust said. Geissbühler is working according to a
Brückner plant concept. Some 10 years ago, Bohnenblust heard the name Brückner for the first time.
“At that time, we were still working with two lines. After the decision in 2005 to put in a new
flexible system, we created a well-defined system profile. The system concept should allow us to
work not only with paste coating, but also with wet and dry laminating. Moreover, Swiss
environmental standards must to be fulfilled.” After a comprehensive test procedure, Geissbühler
decided to buy a Brückner line.

“You know,” Bohnenblust said, “one of our strengths is the ability to coat. With the new
machine, water-based coatings as well as solvent-based coatings can be applied. This is thanks to
the web guide roll direct coating processes on textile fabrics and films, but reverse coating
processes on transfer paper also are possible.” Therefore, she said, there is great flexibility to
execute various production processes such as:


With the purchase of the Brückner plant, the annual production capacity of Geissbühler could
be doubled, and the throughput time in the two-shift production reduced. And what about the
environmental impact, as the Swiss standards are quite high? “Yes,” Bohnenblust said, “the coating
line was completed by a thermal exhaust air cleaning system that is able to clear about 15,000
normal cubic meters (Nm3) clean air, relative to 0°C. In addition, the energy released by this
purification process can be used to heat the tenter frame dryer and the production hall.

“The exhaust air flow inside the tenter frame, particularly with solvent-based coating
systems, requires absolute precision, expertise and experience to meet the energy technical
requirements,” Bohnenblust continued. “With these criteria, a perfect energy concept was
implemented, which ensures an optimum utilization of energy. We can work on the plant up to 320-cm
working width, even with solvents, as they are eliminated completely in thermal afterburning, and
the air released into the atmosphere is absolutely inert.” 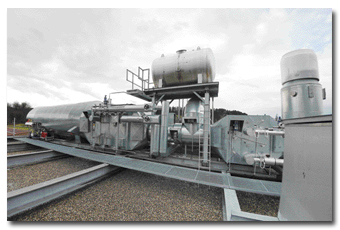 The coating line is equipped with a thermal exhaust air cleaning system, mounted on the
roof of the production hall.


Among other major criteria was that the temperature distribution had to be absolutely
uniform over the entire dryer length and width. According to Bohnenblust, this temperature accuracy
is a vital requirement for a high quality of the coatings during the drying and curing process.

Since November 2009, Geissbühler has been working with the new Brückner production system.
What is the experience up to now? “During the negotiations and the erection of the plant, we were
impressed by the willingness of the Brückner people to implement our wishes 100 percent,”
Bohnenblust said. “This is our first truly modern finishing line. Everything has gone smoothly, and
we’ve never faced any problems. And the benefits are enormous: economic efficiency, quality and
extreme flexibility of the system allow us to produce more articles than ever before.”


Bohnenblust sees the future of the company mainly in the technical textiles sector. “If one
compares the situation today with that of 10 years ago, there is an ever-increasing price pressure
for traditional products such as apparel fabrics. However, the pressure is much less for us,
because we are specialists. Therefore, our range has grown even further in the direction of
industrial applications.”

And have the expectations been met? “Definitely,” Bohnenblust said. “The Brückner equipment
allows us the opportunity to incorporate our own ideas, which gives us an important competitive
advantage. You can also see it this way: The new plant is the main reason for the continuing growth
of our company.” And what are Bohnenblust and her staff doing to be successful in the future?
“Well, we have proximity to the market, and we take the customer seriously. And, as I said before,
the word ‘no’ doesn’t exist in this company.”