M
ilan hosted 225 exhibitors and more than 8,500 visitors at the second edition of the
International Exhibition of Finishing & Knitting Machinery (IKME 2005) held in mid-November
2005. Promoted by the Association of Italian Textile Machinery Manufacturers (ACIMIT) and organized
by Fiera Milano International S.p.A., the show was enhanced by the addition of dyeing and finishing
exhibitors. Thirty-five percent of show visitors came from outside Italy from countries and regions
such as Germany, Turkey, Spain, France, central and Eastern Europe, the Mediterranean Basin and
Latin America. 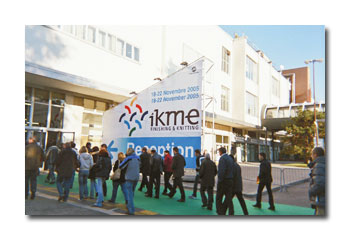 “We received orders directly at the fair and established contacts that can be expected to
turn into contracts,” said Paolo Banfi, managing director and shareholder of Italy-based Comez
S.p.A. and newly elected president of ACIMIT. “The manufacturers’ commitment, aimed at improving
the performance of their equipment, was rewarded. Europe, and Italy in particular, confirmed their
leadership on the world textile scene. IKME Finishing & Knitting is one more reason to look
optimistically [to] the future, where technological leadership always wins.”

An IKME Finishing & Knitting and Italian Trade Commission collaboration attracted 60
buyers from Brazil, Russia, Syria, Iran, Morocco, Tunisia and Turkey; along with representatives of
the academic world from Russia, Iran and Turkey.


The show featured an Excellence Area that displayed innovative products and techniques
accomplished using exhibitors’ technologies. According to organizers, the area was “designed to
satisfy two objectives: to provide a ‘live’ display of the innovative products that can be obtained
using the existing machines; and to experiment with a new kind of partnership between equipment
manufacturers and users — seen as a true and innovative market driver.”

“[The Excellence Area] introduced two strong messages,” Banfi said. “The first is we are
studying niches in more detail because, like a laboratory, within each of these niches we can find
some winning products, and some ideas for other products. The second is talking and working
together. This is a true revolution that is much stronger than it would first seem. In fact,
customers are increasingly asking for solutions rather than products, and this renewed relationship
with the customer promises to redraw the textile industry.”

With a focus on productivity, ergonomics and quality output, IKME gave visitors a first look
at several Stoll products. The company continues to concentrate on flexibility with multigauge
machinery and software developments. Gerhard Berger, communications manager, said this was the
first time the new generation of CMS flat knitting machines was on display.

“The apparel industry is very strong for knitwear,” Berger said. “I am confident it will
continue to grow. The market continues to shift, but with more consolidation and stability. The
knitter needs to offer a quality product with speed, and flexibility is the key issue. Machine
productivity within these parameters offers a return.”

Circular knitting technology also was on display. Companies such as Lonati S.p.A., Sangiacomo
S.p.A. and Santoni S.p.A. — all based in Italy — presented their latest innovations.

Marco Braga, sales area manager, Santoni, pointed to a trend in sportswear and
performancewear markets beyond the intimate apparel so strongly associated with seamless knitting
technology. According to Braga, the goal is to increase the value of the garment and reduce the
number of sewing operations necessary for completion.

Among several new developments he mentioned was the SM4-TR2 knitting machine, which offers
true transfer capability and utilizes a patented needle from Germany-based Groz-Beckert KG that
enables transfer on single jersey.

Warp knitting and crochet technologies also were on view from the likes of Italy-based Jakob
Müller Italiana S.p.A., Spain-based Valentin Rius Clapers S.A. and Comez. This was an area of great
interest, as was apparent in the Excellence Area, where the flexibility of these technologies
beyond traditional end-use applications caught the interest of visitors exploring industrial,
medical and automotive sectors.

Nicola Canziani, president of Italy-based Brazzoli S.p.A., was happy with the turnout. “When
we discussed [this show] three years ago, I was pessimistic,” he said. “Now I realize I was wrong.
Customers have visited from Central and South America, Turkey, India, Iran — almost more than from
Italy. I am happy to be wrong.” 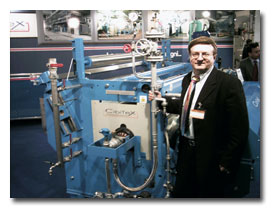 Tecnorama offered the Dose & Dye® system, which focuses on small-batch quality. On
display was a dyeing unit with a capacity of 10 to 100 grams in sampling and 1 to 10 kilograms in
small production.

Rossano Biancalani, general manager of Italy-based Biancalani S.p.A., spoke of a “very good
response” at the exhibition. “We have had visitors from all over and a good response from South
America,” he said. The company introduced the ONDA washing machine for very light and delicate
fabrics. The machine was developed for customers interested in small batch sizes.


Overall, IKME Finishing & Knitting 2005 was a different experience than IKME 2003, held
just prior to the International Exhibition of Textile Machinery (ITMA) 2003. The knit area was as
strong as expected, and the addition of dyeing and finishing equipment, along with the ability to
draw 35 percent of show attendees from outside of Italy, makes the show a strong contender for
future success.