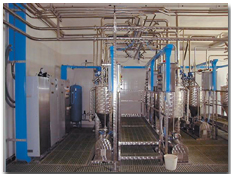 
I
n identifying priorities within the dyehouse, Italy-based Termoelettronica S.p.A.
emphasizes recipe repeatability and reduced number of lots rejected due to offshading, the unequal
tonality of color from dyeing to dyeing. Termoelettronica has demonstrated this emphasis through
its dyeing solutions. Without making large investments in automatic dosing systems, it is possible
to reach such objectives as recipe repeatability and a reduced number of rejected dye lots through
the monitored weighing of dyestuffs using the company’s Termodye-M semi-automatic dissolving
system, according to Termoelettronica. Dissolving the dyestuff can easily be managed in a
centralized area in order to eliminate the problems related to the transporting of dyestuff near
individual machines, which can lead to contamination and above all, misdosing the possibility of
dosing the recipe in a machine for which it is not intended. The system essentially consists of a
series of dissolving tanks, equipped and prepared for dissolving the dyestuffs, the number of which
is determined by the number of dyeing machines to be fed.


Choosing The Most Suitable Installation

An installation might be considered that focuses on dyeing machines with only a preparation tank
without a supervision system with an average load capacity of 600 kilograms. In this case,
Termoelettronica would suggest a single dissolving tank for every five to six machines in order to
save time and avoid delay of dyeing operations. Obviously, if there is a supervision system in
place that allows the preplanned applications of various dosings, the number of machines that could
be fed can be increased. However, it is important to consider that the latest-generation dyeing
machines, such as the MULTIFLOW® from Italy-based MCS, have significantly reduced the dyeing times
so that they take less than half of the time of earlier dyeing cycles. So, even with modern and
fast machines, a company should consider installing a dissolving tank for every five to six
machines. 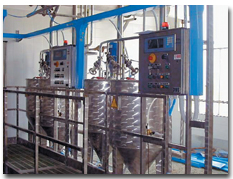 The dissolving system is managed by microprocessors linked by a barcode reader to
additional dyehouse supervision system safety devices.

Regarding the capacity of the single dissolving tank, Termoelettronica typically supplies
several tanks, one of 300 liters and the other of 500 liters, to allow flexibility of options.
(Consider that the dissolution and/or the dispersion of a dyestuff is effected, if not in
particular cases, with a liquor ratio that varies in the range of 1:5 and 1:10.)The particular
design of these dissolving tanks allows one to dissolve minimal dyestuff quantities in 20 to 30
liters of water. Nevertheless, the distance the dye must travel must be considered. A food
electrocleaned type pipeline with an external diameter of 28 millimeters (mm) and a thickness of
1.55 mm is used to distribute dye to the various machines. Termoelettronica uses air to reduce the
volume of water necessary to wash the line, so a minimum amount of water is required to clean the
tanks.

Consideration of the water temperature might seem a little trivial, but it is of notable
importance in the dissolving process of powdered dyestuffs. To obtain the best dissolution, it
would be ideal to use demineralized water, but sweetened water of various degrees of purification
certainly is acceptable. Termoelettronica recommends using warm water at the correct temperature
linked to the class of dyestuffs that must be dissolved. The method proposed by Termoelettronica
enables the monitored mixing, managed by a microprocessor, of two water flows constantly maintained
at two temperatures of 40°C and 90°C (using indirect steam). In this way, an appropriate volume of
water immediately is available at the desired temperature. This procedure allows a rapid
dissolution of the dyestuffs and allows the solution to be fed to different machines using a single
dissolving tank. 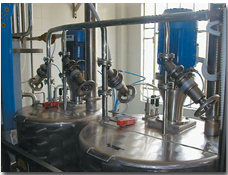