By Gary N. Mock, Ph.D., Technical Editor Getting It Right The First TimeImproved dyes, processes ensure cost-effective, high-quality dyeing. There is a battle of titanic proportions taking place in the fiber world. Will it be polyester or cotton that emerges as the most-used textile fiber around the world Polyester has steadily increased its share of the world market and is expected to replace cotton as the leading textile fiber sometime in 2002. Industry sources predict that some 18 million tons of each will be used in the textile market far more than nylon, the nearest competitor. It is not surprising that leading dye manufacturers have concentrated their research and marketing efforts on dyes for these two traditional fibers.  New Fiber-Reactive Dyes For Cellulosic FibersSwitzerland-based Ciba Specialty Chemicals now has three complete dye ranges for fiber-reactive exhaust dyeing: the Cibacron® FN range for warm dyeing; the Cibacron LS range, which reduces the amount of salt needed in dyeing; and the Cibacron H range for hot dyeing. New products include dyes for black formulations that offer versatility and more economy: Cibacron Black LS-N-01hc and Black W-US. The first is 10 percent stronger than the previous LS-N high-concentration and also is suitable for one-bath polyester/cellulosic dyeing in the LS Superfast process.Black W-US has outstanding build-up, and very good washing-off and wet-fastness; is dischargeable; and is available as a high-concentration formulation, according to Ciba. Also new are two greens that offer improved shade consistency and quality: Cibacron Green FN-BL and Green H-BL. New products in the H range include: Yellow H-G, Orange H-R and Red H-F.

Ciba Specialty Chemicals offers a broad spectrum of dyes for various applications.Photograph courtesy of Ciba.Ciba also has introduced a new range of liquid disperse dyes for the automotive business. This Terasil range gives the exceptional lightfastness demanded by this industry, according to Ciba. Suitable for exhaust dyeing and printing, they include: Blue HL-B, LIQ. 75%;Pink 2GLA, LIQ. 50%;Blue BGE, LIQ. 50%; and Yellow GWL, LIQ. 50%. Germany-based DyStar recently announced a restructuring of the disperse line of dyes under the Dianix umbrella. According to Alan Cunningham, head of marketing of polyester dyes for DyStar, The new Dianix range has been designed to meet the changing needs of our customers for the coloration of polyester, who more than ever look for the highest levels of performance, quality and value to compete in the global market. The Dianix name was chosen because of its excellent name recognition throughout the world. DyStar was formed through the merger of the textile dyes businesses of Bayer AG with Hoechst AG in 1995. DyStar obtained the Dianix name from a previous agreement between Hoechst and Mitsubishi. The subsequent acquisition of the textile dyes businesses of BASF, Zeneca and Mitsui brought DyStar a large market basket of excellent disperse dyes, which now have been unified for different applications.Dianix CC dyes are a range of economical medium-energy dyes for rapid, reliable exhaust and continuous dyeing of polyester and blends with other fibers. With the use of computer control programs, the dyer can expect excellent Right-First-Time performance because these dyes are compatible. They also offer excellent build-up, economical dye recipes and good all-around colorfastness, according to DyStar. A scarlet, blue and turquoise are totally new.The Dianix XF/SF dyes are a range of dyes with the highest levels of washfastness. The dyer can expect little problem for high-washfast apparel, workwear and sportswear. DyStar claims the dyer will achieve high production efficiency, especially on polyester/cellulose blends, through alkaline clearing of unfixed dye, thereby eliminating the need for reduction clearing.The Dianix UN-SE dyes are compatible, level-dyeing dyes for reliable dyeing of medium and heavy shades on polyester fabrics. Once again, compatibility and computer control result in level dyeing performance on difficult fabrics, such as microfiber, and weight-reduced polyester.The Dianix AC-E dyes are three compatible, level-dyeing dyes for rapid, reliable dyeing of pale shades on polyester. Dianix PLUS is a new range of five compatible, level-dyeing dyes for reliable dyeing of medium and heavy shades, especially on microfiber and weight-reduced polyester, whether applied under mild alkaline conditions to control trimer, or under conventional acid conditions.The Dianix S line is an economical range of high-energy powder and liquid dyes with high fastness to contact heat. These dyes are used successfully in exhaust, continuous and printing applications.The Dianix Luminous/Brilliant line of dyes has been specially selected from the fluorescent and brilliant dyes for fashion shades and high-visibility work clothing. These selected dyes conform to the EN-471 specifications for high-visibility work clothing and the EN 1150 specifications for high-visibility leisure and sports clothing. Even with these difficult requirements, the colorfastness is still good.Dianix AM dyes offer the highest level of lightfastness for automotive and other demanding textiles. These dyes offer on-tone fading and minimum metamerism. There also is an alkaline dyeing option to avoid the problems of cyclic trimer deposition, especially noticeable in package dyeing and winding. A new red and a brilliant blue have been added to this line.Finally, the Dianix P dyes offer the dyer a complete range of economical liquid disperse dyes for textile printing. These dyes are suitable for standard applications as well as for specialties such as burn-outs, flags, banners and camouflage. Controlling Your CostsThere is no doubt in anyones mind that process control is the first step in controlling costs. Dyeing and getting it right the first time has significant cost advantages. With profit margins as thin as they are today, one simply must rely on ones system and believe that it is right. Of course, the control system has to be good. Over the years, DyStar has developed an advanced control system called Optidye. The system allows the dyer to link the process controller with the lab, host and color kitchen (See Figure 1). When individual machine characteristics and load size are factored in, there are bound to be slight corrections as one moves from one dye machine to the next. There are simply too many factors involved to keep track of this annually. Optidye has been proven in the field for years now. 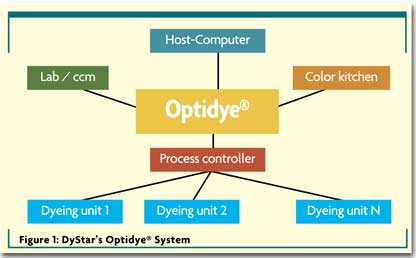 Technodye – New Dyeing ProcessArgelich, Termes y Cia S.A. (ATYC), Spain, is working on an electrochemical dyeing process in close cooperation with the Catalonian Polytechnic University through the Instituto de Investigaciextil y Cooperacindustrial de Terrassa (INTEXTER), and with the support of Clariant. Such cooperation is devoted to developing a fabric-dyeing process using electrolytic dyestuff reduction specifically for sulfur, vat dyes and generally all dyes that require reduction. The trials already have been initiated in a computerized lab pilot machine installed at INTEXTER.The advantage of electrolytic reduction of dyestuff is that it avoids reducing chemicals, which in turn reduces contamination in the water, thereby eliminating 90 percent of the biological oxygen demand and chemical oxygen demand levels in the dyehouse effluent. The effluent is pure enough to be reused in subsequent dyeing. Trials have been concluded using black sulfur dyes on cotton knit fabric, with very satisfactory results.Textile World has tried to hit the highlights of some of the new developments in cotton and polyester dyes, along with controls and machinery that will make life easier for the dyer. Better dyes with better properties allow dyers to better satisfy their customers. New process technology can enable them to save money because fewer chemicals are used and less waste water needs to be treated. Lets have a greener world.June 2002