Newly revised government figures provide still more solid evidence that the huge domestic textile and apparel slides of the past few decades are finally over. In fact, in a few areas, some modest advances have been recorded over the past few years. But before discussing the detailed findings, a few overall comments on the new numbers seem to be in order. First, it should be noted that the benchmark year for comparing changes over time has been changed from the earlier 2007 base to a new 2012 one. Uncle Sam’s new index numbers for industry activity now use 2012 as their 100 base comparison year. Example: The latest 105.5 estimate for basic mill product output shown on the Textile Barometers chart means that production in this specific area currently is running 5.5-percent above the average level prevailing back in 2012. Other points in this latest government revision that also involve data on capacity and capacity utilization — neither of which is shown in TW’s Textile Barometers — include the use of more up-to-date and more comprehensive survey information from industry sources, the changing importance for the individual subsectors that make up our textile/ apparel industry, some shifts in seasonal activity patterns, and improvements in Uncle Sam’s estimating methodology for some of these subsectors. Keeping all the above in mind, here’s a brief summary of the latest findings. 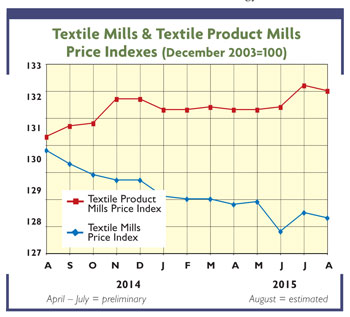 Revised Production Trends
The new, somewhat more upbeat textile and apparel outlook can best be seen by zeroing in on the industry’s recent production numbers. At last report, mills making basic products like fabrics, were producing  2.6-percent more than 12 months earlier. And, as noted above, the current index reading of 105.5 means that the gain since 2012 was an even more impressive 5.5 percent. True, the picture for mills making more highly fabricated products like rugs and home furnishings isn’t quite as bright — with some fractional declines noted over recent quarters. Nevertheless, output here also is running more than 5-percent above a few years back. Indeed, apparel is the only really disappointing area, with current output still trailing 2012 base levels. But here, too, there are some signs of improvement. Thus, new apparel estimates show apparel output starting to bottom out over the past 18 months — with some of the improvement probably attributable to the growing reshoring trend. It might also be noted that the apparel decline since 2012 comes to only a few percentage points— well under the huge drops of the previous 10 years, a time when domestic clothing firms were losing more than 75-percent of their entire market. Still another positive sign: Aggregate mill output — basic plus fabricated mill products — no longer constitute a shrinking portion of the U.S. economy. More to the point: Domestic mills’ overall growth since 2012 is only slightly under the comparable 7-percent advance noted for all U.S. industrial production.

Capacity, Operating Rates
Still another positive sign: The recent bottoming out in industry production potential. Comparing the average annual decline over the 10-year period ending in 2012 with the slippage over the past three years, tells the story. Mill output potential since 2012, for example, has slipped only 1.5-percent annually. That’s less than half the near 3.5-percent erosion rate of the previous 10 years. More importantly, given the $1 billion-plus annual new mill capital spending reported over the past few years, today’s capacity is probably a lot more efficient that that of a decade ago. It should also be pointed out that a similar pattern is noted for the domestic apparel industry with a 5-percent annual capacity decline over the 2002-2012 period giving way to a much smaller 2.25-percent-a-year drop over the past 3 years. Not surprisingly, these recent smaller declines when combined with some modest demand recovery have also helped buoy up industry operating rates. Three years ago, these rates were put at low 66-percent and  65-percent levels for mills and apparel makers, respectively. Today, they’ve climbed to more than 73 percent for mills, with the apparel rate holding steady near 65 percent. Point to keep in mind: Other things being equal, steady-to-higher utilization of facilities means stronger markets and generally a lot higher profits and margin levels. And if there’s any question on this last point, just compare current strong earnings figures to those reported just a few short years ago.