Textile and apparel industry profits are a pretty good bet to at least equal last year’s strong levels. Credit this positive outlook to a combination of modest demand gains, the absence of any significant cost pressure, and fairly firm prices. Indeed, given the current business climate, earnings could well inch a bit higher. Nor are TW editors alone in looking forward to another good year. The economic consulting firm Englewood, Colo.-based IHS, in its latest industry projections, is pretty much telling the same story. Its analysts, for example, see 2- to 3-percent profit gains in 2015 for both basic textile mills and apparel manufacturers with mills making more highly fabricated products showing a small fractional advance. Moreover, these increases will be coming on top of the much larger double-digit advances racked up over the past year when sharply lower cotton costs gave producers’ bottom lines a big boost. And the outlook beyond 2015 as seen by IHS analysts seems to be equally bright. Next year, for example, continuing modest earnings gains are projected averaging out at near 4 percent for all three of the just noted industry subsectors. Moreover, go further out into the future, and the economic consulting firm anticipates further small profit gains. That’s hardly a bad future for an American manufacturing sector that many had seen headed for the scrap heap as recently as just five years ago. 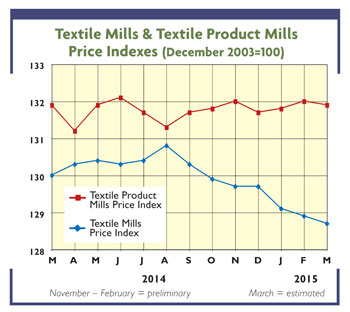 Other Upbeat Signs
There are also a host of other signs that would seem to indicate solid bottom-line progress over the next few years. For one, there’s the optimism of mill executives. They would hardly be earmarking more than a billion dollars a year for new plant and equipment if they did not expect a decent return on their investment. Also supporting a rosy earnings picture is the fact that this improving profit scenario is not just something that has suddenly cropped up. Indeed, IHS numbers for the current 12-month period — numbers that factor in all the industry’s profit determinants — have consistently been in the plus column for well over a year now. Still another positive sign: The new 2015 forecast for both textile mills and apparel makers actually are a bit higher than they were six years ago — a time when demand was considerably higher than it is today. Still another indication of stronger earnings is the fact that the percentage of the revenue dollar needed to cover production costs had been declining steadily. Latest 2015 numbers, for example, show combined labor and material costs accounting for 44.6 percent, 56.5 percent and 84.3 percent of the sales dollar for basic textiles, more highly fabricated mill products, and apparel, respectively. They are well under levels prevailing just two year ago. Other things being equal, such declines would clearly suggest that profit margins — profits per dollar of sales — are now also moving higher. Indeed, a look at Uncle Sam’s latest margin numbers would clearly seem to confirm this trend.

The Improving Demand Impact
A few further words also are in order on the demand influence on profits. As point out above, anticipated higher industry activity should be an important contributor to better bottom-line performance. Indeed, improving activity already is apparent, with early 2015 retail apparel sales running upwards of 3-percent above year-ago levels. And TW would expect to see these sales continuing to increase because of a combination of factors: expectations of a 3- to 3.5-percent-advance in 2015 gross domestic product, about 0.5-percent more than last year; a falling jobless rate that could slip to near 5 percent by next fall or winter; a substantial boost in consumer purchasing power engendered in large part by the recent sharp drop in gasoline prices; and the strong recovery in household net worth combined with a significant decline in the household debt/disposable income ratio from 130 percent just before the recession to 107 percent currently. Add in the fact that consumer confidence is now near its highest level in years, and TW now expects the buying of apparel and other textile products to actually accelerate a bit over the remainder of the year and well into 2016. Point to keep in mind here: The pickup in buying is almost certain to have a positive effect on industry earnings. To be sure, just how much of an impact is difficult to precisely quantify. But throw all of today’s profit-enhancing factors into the consumer hopper and TW feels fairly certain that as much as half of any near-term bottom-line improvement will probably be because of improving industry demand.