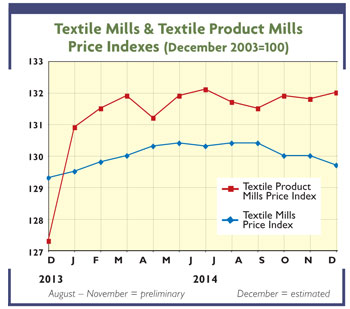 Projected 2015 Changes
Keeping all the above in mind, here’s what TW sees for the next 12 months. Combined textile and apparel shipments should rise about 3 to 4 percent — just about in line with the expected overall gross domestic product increase. Productivity advances should pretty much equal the 3 percent average annual advance of the past decade. But that should be more than enough to offset pay hikes which are targeted to run only in the 2- to 2.5-percent range. Upshot: Another small decline in unit labor costs. Material costs, too, could drop a bit more as a cotton glut keeps the natural fiber under more downward pressure. As for prices, relatively good demand suggests that quotes won’t weaken. But neither are they likely to rise very much since supplies clearly will remain more than ample. Imports, meantime, could slip a small 1 percent or so as domestically produced goods become increasingly competitive. As for bottom lines, they’ll also continue to improve, but at a more modest rate than noted over the past year or two. TW editors also took a look beyond 2015 with longer-term industry projections pointing to additional gains. But they won’t be nearly enough to recoup any meaningful portion of the huge losses incurred over the past two decades.

Role In The Economy
All the above makes it crystal clear that the U.S. textile and apparel industries are no longer a drag
on overall U.S. activity. As pointed out above, growth in both sectors over the past year has been pretty much in line with that of the nation’s overall macro-economic gain. Moreover, when it comes to earnings and profit margins, the industries’ increases were even more impressive — actually surpassing that of many other industries. To sum up then, the domestic textile and apparel firms are alive and well, currently accounting for $72 billion in annual shipments and providing direct employment for more than 360,000 American workers. Add in the fact that each of these jobs probably supports employment for as many as three other workers, and the industries’ role in the overall U.S. economy becomes even more impressive.

Gauging Forecast Accuracy
There are things that could put a damper on the rosy picture just outlined — an unexpected slowing down in general economic growth, another round of Congressional gridlock or some unforeseen global crisis. While odds of such negative developments are quite small, they do preclude 100-percent accuracy. Nevertheless, TW feels that any deviations from forecast levels will be relatively small as indicated by the recent track record. Last year, TW’s projections were in almost all cases quite close to what occurred. About the only area where TW was substantially off the mark occurred in the profit sphere, where bottom line improvement surpassed projections by a significant amount. A year ago, TW predicted only about a 5-percent advance in 2014 mill profits — considerably under the actual 15-percent increase. Blame the underestimation on the fact that fiber costs dropped far more than expected. But to repeat: Aside from this one deviation, TW numbers were pretty much on the mark, and that’s been the case for several years now. Putting all this in the language of statisticians, TW can state with about 95-percent confidence that the new projections will fall within 0.5 to 1 percentage points of forecast levels.