The year is ending on an encouraging note. Based on current reports, overall consumer demand, sparked by the start of the holiday buying season, has been fairly encouraging. One key reason: Accelerating gross domestic product (GDP) gains — with the current 3-percent-plus rate of increase now expected to spill over into the new year. Point to keep in mind here: Textile and apparel demand is highly correlated with GDP, with every percentage point increase in business activity historically resulting in a similar advance in textile industry activity. Moreover, still further buying incentives now are coming from both relatively low gasoline pump prices, which are freeing up a lot of consumer dollars; and increases in household net worth, which at last report was put at more than $81 trillion — 20-percent above the prerecession peak of 2007. Again, if past behavior is any indication, this also should help loosen up consumer pursestrings. Other things being equal, the above trends should not only strengthen textile demands, but also textile profits, which have begun to rise thanks to falling cotton costs that are now at their lowest level in five years. Moreover, this positive cotton impact on industry earnings could well strengthen. Reason: Global cotton glut that is being intensified by the recent decision on the part of China to cut its next year’s imports of the fiber by substantial amounts. Not surprisingly, some analysts now are suggesting cotton quotes could well slip another few percent over the coming months. 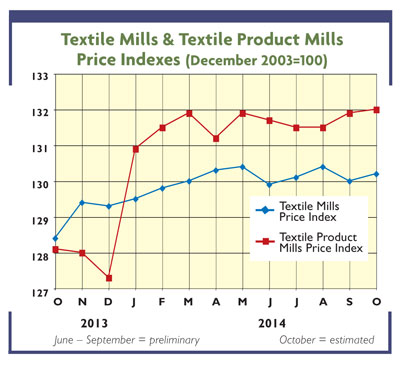 But Imports Remain High
All the above doesn’t mean that everything is coming up roses. One still disappointing sign: The failure of incoming shipments of textiles and apparel to taper off — even in the face of increasing talk about “reshoring.” Indeed, the latest import numbers actually have been inching higher. More specifically, year-to-date textile and apparel shipments on a square meter equivalents basis were running some 4-percent ahead of comparable 2013 levels. Two factors probably are behind this continuing strong inflow. First, today’s positive macro-economic climate has clearly increased demand for imports as well as domestically produced products. But still another reason for the lack of progress in slowing imports could be recent currency valuation moves by China. Ever since early this year, the Beijing yuan has been inching lower vis-à-vis the U.S. dollar. That’s in sharp contrast to the 20 percent yuan appreciation noted over the 2010-13 period. Other things being equal, this currency about-face is helping sustain U.S. demand for Chinese products primarily because Chinese producers now are less pressured to raise their asking prices.

Better Days Ahead
Despite this current inability to stem incoming shipments, the import outlook isn’t all that bad. For one, it should be noted that current import increases for the most part are being matched by similar gains in domestic textile and apparel output of these same products. This would seem to suggest that American firms no longer are losing market share. But even more encouraging for U.S. producers is the increasing likelihood of a “reshoring” speedup over the next few years. Any production shifts back to the U.S. haven’t been all that dramatic until now. But there’s plenty of evidence that this may be about to change. For one, the foreign labor cost advantage has been dwindling with overseas pay rates jumping as much as 20 percent annually over the past 5 to 10 years. Equally significant, American firms are becoming increasingly aware of the so-called hidden costs of importing, including the higher than U.S. energy outlays prevailing overseas, the hefty transport bills incurred bringing these overseas goods to U.S. shores, and the difficulty in making speedy adjustments to changes in user demand. The last point is especially significant in the textile industry where unforeseen fashion changes can result in sudden shifts in demand for many products. One industry executive figures that these factors can add as much as 20 percent onto a company’s real costs. Further add in the preference of U.S. consumers for “Made-in-America” products, and the still huge U.S. textile and apparel import total is bound to flatten out or even begin to edge lower — if not now, then certainly over the upcoming few years.