Just-revised government employment figures, based on new, more detailed benchmark data, confirm the
feeling that the job picture is beginning to look a bit better. And that’s true for the U.S.
textile and apparel industries as well as for the U.S. economy in general. Looking at the
big-picture macroeconomic trend first, the number of American jobs created over the past year has
turned out to be significantly higher than reported only a month or so earlier — 2.2 million,
versus the 1.8 million previously estimated. Moreover, even with continuing Congressional haggling
over taxes, spending and the deficit, this forecast isn’t likely to change by much. Most economists
would seem to agree with this assessment as they remain cautiously optimistic. Their updated
consensus: the creation of some 170,000 jobs each month. Multiply this by 12, and it points to
another two-million-or-so job openings for 2013. This won’t be nearly enough to make any really
significant dent in the United States’ still-high unemployment numbers, with the rate still
expected to be above 7 percent by year-end. But the increasing number of new jobs is clearly better
than the substantial shrinkages noted over the recent recession. More importantly, a growing
workforce can be expected to translate into rising business optimism, higher incomes and more
consumer spending. 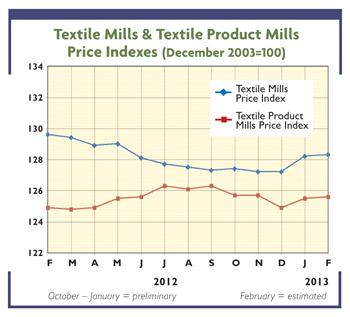 
Indeed, this greater propensity to spend may already be helping to bolster textile and
apparel job numbers. Revised Washington figures on the mill level show employment relatively
unchanged from year-earlier levels. And the picture isn’t much different on the domestic apparel
front — with the year-to-year job total showing little more than a fractional decline. What really
makes all these numbers even more upbeat is the fact that they are occurring at a time when
industry productivity has been rising at a near 3-percent annual rate. Put another way, a 3-percent
productivity increase at a time when the workforce has been holding relatively steady suggests that
the U.S. textile and apparel industries turned out more goods in 2012 than they did in 2011. And
other Washington numbers clearly back up this conclusion, as shipments of mill products and
clothing now run 2- to 3-percent and 4- to 5-percent, respectively, above year-earlier levels.
Moreover, the uptrend seems likely to continue, with early 2013 Institute for Supply Management
surveys pointing to additional gains in industry activity for both January and February. Go beyond
the next few quarters, and equally encouraging news comes from still another recent government
study calling for only minimal declines in textile and apparel employment over the next three
years. True, that’s not the same thing as a gain, but it’s clearly a major change vis-à-vis the
steady declines of the past decade.


A brighter import-export picture could also be playing a major role in the U.S. industries’
more positive employment and demand outlooks. On the import front, final figures for 2012 show that
the volume of textile and apparel shipments is no longer rising. Credit a good part of this to
reshoring — it’s a strategy that a growing number of companies, including large ones like Walmart
and Brooks Brothers, are now increasingly touting. Walmart, for example, has already contracted to
carry a U.S.-made towel in 1,200 of its stores by sometime this fall. And what makes all of this
especially significant is that reshoring is occurring at a time when domestic demand is actually
rising. Other things being equal, this suggests that U.S. mills and apparel manufacturers may no
longer be losing market share. Meantime, the export side of the trade equation is also beginning to
look a little better — with last year’s exports of textiles and apparel, while still quite small,
actually managing to post the third consecutive year of modest increases. And while it might be
hard to believe, one U.S. hosiery mill now says it has even begun to sell some products to U.S.
archrival China. To be sure, the volume involved is small, but, combined with flattening imports,
this improving export trend does seem to indicate that the United States’ huge textile-apparel
deficits will continue to edge a bit lower.