Textile World
‘s annual trek to the crystal ball seems to be getting increasingly difficult. This time
around, there have been more than the usual number of iffy factors to deal with — questions that
not only impact overall economic growth, but also the fortunes of the United States’ domestic
textile and apparel industries. These include the almost certain continuation of Washington
political infighting, even after the modest year-end compromise. The trouble is that the new pact
that prevented the U.S. economy from falling off the fiscal cliff does little more than push the
really tough decision further on down the road. Then, there are two other disturbing uncertainties
— namely, the still-simmering euro crisis and a possible slowdown in the Chinese economy, which
could hurt both global and U.S. growth.

TW
editors, however, are basically optimistic as far as all these questions are concerned —
feeling that, while uncertainties will persist, nothing catastrophic will happen. And the many
economists

TW
has talked to are pretty much of the same mind — with their 2013 average gross domestic
product gain remaining in the 2- to 2.5-percent range. That should be enough to allow for modest
textile and apparel growth as well as some significant improvement in bottom-line performance.
Moreover, if its recent track record is any indication,

TW
‘s projections won’t be all that much off their mark. For example, 2012 numbers presented
last January in most cases came within 0.5 to 1 percent of actual results. 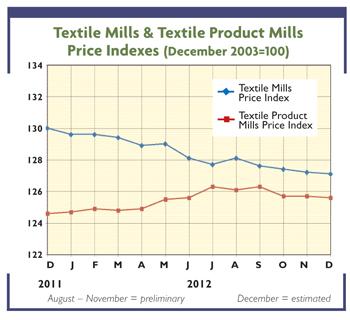 
Meantime, a few more words on how

TW
sees things shaping up: First, there has been a very real trend shift away from the steady
tattoo of sharp textile and apparel declines that marked the last few decades and toward the
flat-to-slightly higher levels noted since 2010. These recent U.S. gains have been marginal, but
the fact that they’ve persisted for three years suggests that this is not a temporary blip, but
rather the beginning of a new, more positive future. That’s not to say there will be any
significant recouping of past huge losses, primarily because business recovery will be slow and
import competition isn’t about to disappear. True, the U.S.-overseas cost gap has been narrowing a
bit, but not nearly enough to bring back any really substantial portion of the markets U.S. textile
and apparel producers lost. Moreover, as costs in countries like China — by far the United States’
biggest foreign supplier — rise significantly, there will be plenty of other countries willing and
able to pick up Beijing’s losses. However, there should still be plenty of opportunities for
sizable gains by domestic firms that come up with more innovative products — especially ones aimed
at niche markets. A similar rosy outlook beckons for companies willing to invest in flexible,
labor-saving equipment — the kind that can both lower costs and better satisfy customer needs.


All the above would also seem to bode well for domestic industry profitability. Indeed, the
outlook — both for the new year and the long pull — is actually quite bullish. This is clearly
the case for 2013, for which some really impressive increases loom ahead for all the
textile/apparel subsectors — basic mill products, fabricated mill products, and clothing. While
somewhat better volume is one reason, a good part also reflects the sharp decline in material costs
following the 2010-11 cotton price slump. As for the specific gains, new predictions by Global
Insight provide the details. Analysts at this firm are calling for an almost doubling in 2013
after-tax earnings for both the basic and fabricated mill areas. And the improvement is even more
dramatic in the apparel sector, for which a big jump is projected — erasing the dismal performance
of 2012, when clothing manufacturers as a whole barely managed to avoid dropping into the red. Nor
should this gain prove to be a one-year aberration. Global Insight anticipates continuing, albeit
small, advances for the following few years, with domestic textile and apparel profit levels in the
3- to 5-percent range over the 2014-16 period. Moreover, go even further out to the year 2020, and
the United States’ domestic firms should continue to more than hold their own. In short, U.S.
companies are alive and well — and likely to end up even stronger as the end of the decade
approaches.