Attractive pricing could be one reason why textile and apparel demand has held up so well over the
past few years. Apparel tags have only risen about 6 percent since the pre-recession days of 2007 —
or 1 percent per year. And textile quotes, while they did spiral in late 2010 to early 2011 because
of skyrocketing cotton costs, have again dropped back to pre-cotton-runup levels. All this is in
sharp contrast to the near-20-percent jump in all U.S. manufacturing prices over the past five
years. This differential, if nothing else, has made clothing and other textile products a lot more
enticing to consumers who have had to make tough decisions on how and where to spend their
still-limited incomes.

More important, this less-than-average textile/apparel price pattern should persist. For
one, material cost pressures look to remain low, with all signs pointing to ample or
more-than-ample supplies of both cotton and man-made fibers. And similar cost restraint is seen for
labor, where 2- to 3-percent hikes in hourly pay continue to be offset by productivity increases of
the same magnitude. Then, there’s the price-dampening impact of imports. True, incoming shipments
of relatively low-priced textiles and apparel have leveled off. But there’s little to suggest any
decline.

Finally, industry management continues to make progress in keeping costs down — both by
eliminating waste and improving production and distribution operations. Better inventory control
provides a good example of this progress — with days’ supply remaining well under levels of the
past few decades, despite some huge swings in month-to-month demand. This is something that can
have a big bottom-line impact, as carrying charges make up a big portion of the typical firm’s cost
of doing business. 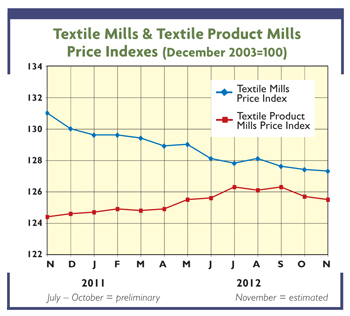 
All the above, however, is in no way meant to imply that the U.S. industries’ prices won’t
edge higher over the next year or so. They’re bound to inch up, if only because of the overall
inflationary pressures generated by both the U.S. and global economies, as they strive to spark
larger economic gains. As such,

Textile World
‘s 2013 price projections for both basic textiles and more highly fabricated products like
carpets and home furnishings are expected to show continuing — probably near 1 percent — advances.
And it’s much the same picture for apparel, where only fractional increases are anticipated.
Contrast these to the almost certain much bigger boosts expected in other sectors — especially
those centered in areas that compete for the consumer dollar — like food, transportation, shelter,
education and medical care. As such, prices should continue to be a textile “plus” next year — at
least, as far as shoring up demand is concerned. Indeed, at this point in time, there’s little to
suggest that these differing price-rise patterns won’t spill over into 2014 and beyond.


Changes wrought by the recent national election could also play a rather important role in
how the U.S. economy and its textile and apparel industries will fare over the next year or two.
While nothing can be said with absolute certainty, it’s becoming increasingly clear that pressure
to avoid falling off the “fiscal cliff” — with implementation of higher taxes and substantial
spending cuts starting Jan. 1, 2013 — is becoming a lot more intense. This doesn’t mean a so-called
“ground bargain” between feuding Democrats and Republicans will be signed, sealed and delivered by
year-end. But it does suggest that some sort of emergency legislation will be passed to delay or
modify these negative fiscal moves. More important, most business analysts feel that a few extra
months of haggling won’t have a catastrophic impact on the U.S. economy. Given the above scenario,

TW
is now projecting about a 2-percent advance in gross domestic product (GDP) for the next
year. That’s far from great, but it’s a little better than 2012’s anemic less-than-2-percent
advance. Moreover, if things turn out as anticipated, 2014 could see some modest acceleration in
the growth rate — with a 3-percent or slightly higher GDP increase expected. That’s a rate which
could finally begin to make a dent in the United States’ still way-too-high jobless rate. All this,
in turn, seems to assure a continuation of somewhere near the current level of U.S. textile and
apparel activity. More on all this next month, when