There’s increasing evidence that 2012 may turn out to be better than first anticipated. Family debt
is down significantly from peaks of three years ago, in dollar terms and as a percentage of gross
domestic product (GDP). This is an important change, as a more manageable debt level gives
households more to spend on apparel, home furnishings and other goods. Higher weekly pay, up 2.5
percent over the past year, should also help bolster family purchases in coming months. And
relatively weak inflationary pressures aren’t enough to force consumer buying pullback or prevent
the Fed from pursuing its low-interest note strategy.

Still another economic fillip comes from extensions of last year’s payroll tax holiday,
which gives the average family about $1,000 a year, and more assistance to the long-term
unemployed. The fact that the nation’s biggest banks have agreed to provide relief to nearly two
million current and former homeowners hurt by the housing fiasco should also help.

It now appears that 2012 GDP gains should top the earlier projected 2-percent rate. A new
Wall Street Journal poll of 49 leading economists calls for a 2.5-percent advance, and some
respondents put the increase at close to 3 percent. And, these same people think the economy is
more likely to beat expectations than fall short. These projections also suggest that two million
jobs will be added to the economy over the year. That should be enough to drop the jobless rate to
under 8 percent by December — and to 7 to 7.5 percent by late 2013. 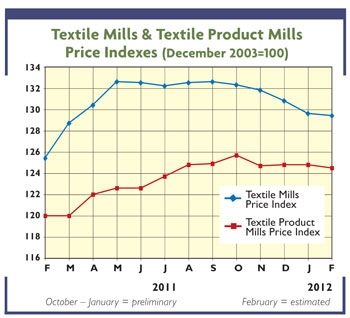 
The flattening out of textile and apparel shipments from abroad also has to be regarded as a
major plus for U.S. producers. Final figures for 2011 show U.S. imports of these products down more
than 3 percent from a year ago in real or square-meters-equivalent terms. Moreover, the falloff
seems to be intensifying, with November/December off by 7.5 percent. Much of the decline can be
traced back to China, where bargains are becoming a lot harder to come by. Part of this is due to a
rising Chinese yuan, up 40 percent on an inflation-adjusted basis since 2009. And most financial
analysts see some additional creep-up this year, though it’s likely to be in the 2- to 4-percent
range. Nor are exchange rate shifts the only factor behind the recent import slowdown. Domestic
buyers have faced some serious supply chain problems in recent years. This was certainly true
during the recent business downturn, when demand tumbled, leaving some U.S. firms with heavy
inventories on slow boats from the Far East. Equally disturbing are global delivery interruptions
stemming from such natural disasters as last year’s tsunami in Japan and flooding in Thailand. To
be sure, all of the problems noted above are not going to bring back the United States’ old share
of global textile and apparel markets, but they do suggest that import penetration of these
products has pretty much run its course.


New Washington developments also should further improve the United States’ overall import
situation. In large part, they’re prompted by election year pressures, as both parties try to avoid
being painted as weak on China. The Obama administration, for example, has announced plans to
create a task force to monitor Beijing for possible trade and other commercial violations.

Also encouraging is a White House “insourcing” plan to bring jobs back to America. Steps
being contemplated include: cutting taxes for firms producing goods in the United States; taking
away tax breaks from businesses that move jobs offshore; providing a tax deduction for makers of
high-tech goods; expanding worker training programs; and closing loopholes that allow firms to
shift profits abroad. Actually, these proposals aren’t too different from policies pursued by many
U.S. competitors. Countries like Germany, Japan and China already offer large tax breaks and
financial support to their domestic industries. Also, even without any new U.S. moves, there are
indications of an improving trade climate. A recent survey by MFG.com, a site connecting
manufactures with suppliers, finds one in five firms are already bringing production back from a
low-cost country — up from one in 10 two years ago. And if some reports are true, this trend is
even spilling over into the textile/apparel sector. In short, the U.S. trade situation isn’t nearly
as bleak as it was a year or two ago.