The current textile outlook — despite all of today’s economic uncertainties — remains modestly
upbeat, with solid confirmation coming from year-to-date numbers covering demand, employment,
imports and costs. Looking at demand first, mill output now tops comparable 2010 levels, with basic
mill sector output increasing an impressive 10 percent. Producers’ dollar shipments show a similar
pattern, and downstream domestic apparel manufacturing is equally positive, with dollar shipments
running about 4 percent ahead of a year ago. And there’s little to suggest this apparel
manufacturing pattern won’t continue. Further downstream, retail apparel sales are also looking up,
with totals also above year-ago levels. At last report, consumer purchases were running close to 8
percent above last year. Another sign that gains will persist: Inventories at the textile mill and
apparel levels remain well under the peaks of a few years back — suggesting that new orders will
quickly be translated into new production. In short, the U.S. textile and apparel industries aren’t
doing too badly in today’s relatively sluggish economy. Fewer Job Losses

The industry’s employment situation is also a bit less gloomy. The total number of U.S. mill
workers has held quite stable over the past 12 months — a refreshing change from the almost
uninterrupted declines of the past decade. What makes this job total especially encouraging is that
this has occurred even in the face of rising productivity — a trend that has enabled the industry
to employ fewer and fewer workers to turn out a given amount of mill product. The job picture for
apparel isn’t all that bad either. To be sure, employment totals here are down some 2 percent vis à
vis a year earlier. But again, that’s an improvement over the declines of previous years. And if
there’s still any question about a less negative job situation, compare the current numbers for
aggregate textile and apparel employment with the huge more-than-50-percent decline noted over the
past decade. More important, this current stabilizing employment trend is expected to persist
through year end and probably well into 2012. 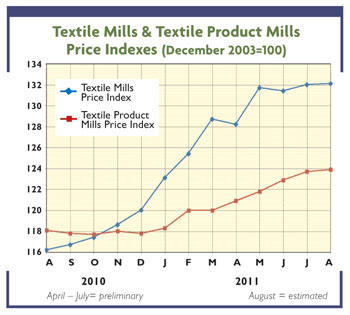 
More good news comes from the latest batch of import statistics. Year-to-date incoming
shipments of textiles and apparel on a square-meters-equivalent basis are up by less than 1
percent. That’s far less than the close-to-double-digit increases of just a few years back. Even
more noteworthy, the increases from China — far and away the United States’ biggest supplier — have
virtually disappeared over the past few months. To be sure, some of this import deceleration is
probably because foreign suppliers have already captured most of the U.S. market – and, as
such, there’s very little more to tap. But some of the restraint may also be attributable to the
fact that the foreign price advantage has been narrowing of late — especially in China, where
production costs, particularly in the labor sphere, have jumped significantly over the past year or
so. Put another way, import bargains are now harder to come by. Indeed, this could well be one
reason why domestic textile and apparel activity has been holding up as well as it has in today’s
troubled economic times.


Still further optimism can be gleaned from the sharp decline in cotton costs over the past
few months. As of Textile World’s press time, for example, this key fiber input had dropped down to
around the $1 per pound mark. That’s a little more than half the almost $2-plus-per-pound early
2011 peak price and only about 20 cents per pound above year-ago levels. And forecasts for another
good crop year, both here and abroad, suggest raw cotton will remain at or near current reduced
levels. Nor is the other major cost drain — labor — likely to cause any near-term problems. Worker
costs per unit of output are up only fractionally over the past 12 months.

To sum it all up: Clearly, all of these new numbers offer pretty firm evidence that the
recent cost-price squeeze is winding down — and, more importantly, that 2011 profit performance
won’t be all that bad. And