S
kyrocketing cotton — and to a lesser extent, polyester — tags are beginning to have a
significant impact on industry prices and profits. On the price score, for example, Uncle Sam’s
index for basic mill products like yarns and fabrics have moved up about 6 to 7 percent over the
last few reported months. And more advances in this key textile yardstick seem inevitable —
primarily because it takes considerable time for all the new price increases to percolate through
into this government index. As such, by mid-year, the increases here could well be near 10 percent
unless cotton costs take an unexpected tumble. Nor are basic mill products alone in posting big new
price increases. The picture is pretty much the same for both more highly fabricated mill products
and many apparel lines. Ditto, for textile imports, which are also running some 6 to 7 percent
ahead of a year ago. Other usually reliable sources are also pretty unanimous in confirming this
new across-the-board price surge. A spokesman for Cotton Incorporated is now on record, predicting
that price increases should eventually approach the 10-percent mark this year. And a projection by
the American Apparel and Footwear Association is only slightly lower — with mid- to
high-single-digit price increases anticipated for many items. And, last but not least, there are
the new numbers just released by Global Insight, a major U.S. economic consulting firm. Analysts
here see even heftier price increases — calling for 2011 textile and apparel tags to soar into the
double-digit range. Upshot: 2011 will be an unsettling year for industry prices — ending a period
of more than a decade of only fractional annual advances. 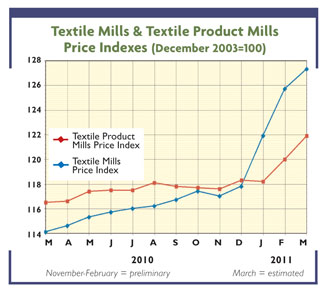 
But, as big as 2011 projected price boosts are expected to be, competitive pressures will
prevent them from coming even close to offsetting spiraling fiber costs. As such, profit declines
now seem virtually inevitable. Global Insight, for one, feels the 2011 shrinkage could be quite
significant. Using its rough approximation of industry earnings — sales less material and labor
costs — the economic consulting firm now projects major bottom-line deterioration in all three
segments of the industry — basic mill products, more highly fabricated textile items and apparel.
Looking at basic textiles first, Global Insight analysts put the 2011 profit drop at more than 30
percent. That’s more than enough to erase last year’s solid gain. And the pattern is pretty much
the same for more highly fabricated mill products. This suggests that in both these sectors,
profits this year will fall to their lowest levels in more than a decade. On a somewhat less gloomy
note, the expected dip in apparel earnings will be in the somewhat lower 20-percent range — not
nearly enough to erase all of this past year’s big 50-plus-percent gain. Also on a bit more upbeat
note, virtually all mills and factories – despite the cost-price squeeze — will manage to stay in
the black. Another positive sign: Industry dollar shipments will continue to show advances this
year – thanks to all the new price increases now being superimposed on a relatively steady volume
of sales.


In short, the U.S. textile and apparel industries are going to survive this latest round of
problems. Indeed, by next year, things should begin to look a lot better. For one, the current
fiber cost runup isn’t going to last forever. Given expectations of a big 2011-12 marketing year
cotton crop, prices of the natural fiber are almost certain to fall back to more normal levels.
This, in turn, should result in gradually improving 2012 and 2013 bottom-line performance. In fact,
by the latter year, analysts at Global Insight see profits in all three textile/apparel categories
staging a strong recovery — with earnings at that time running near or even a bit above this past
year’s tolerably good, pre-cost-runup levels. A relatively bullish macroeconomic outlook should
also help this encouraging profit recovery along. Most economists, for example, now expect 3- to
3.5-percent annual growth over this extended period – enough to nudge overall U.S. consumer demand
for mill and clothing products above current levels. American firms will also be helped by some
slowdown in the rate of import gains. There are already signs, for example, that incoming shipments
from China are being hurt by that nation’s rising domestic inflation and a  slowly
appreciating yuan. The fact that foreign countries have already pretty much captured the United
States’ most vulnerable markets also suggests import deceleration. Together, these developments
point to a 2012-13 halving of last year’s near-19-percent import gain.