A
shifting trade strategy will continue to bear close monitoring. It’s now pretty clear
that by year-end, the value of China’s currency, the yuan, will be running somewhat above recent
levels — hopefully enough above at least to start slowing the tidal wave of Chinese shipments
abroad. And it’s coming none too soon for textiles and apparel, as U.S. imports of these products
recently have been running 25-percent above a year ago —  in sharp contrast to the 3.5-percent
increase in imports of these products from all other countries. Even the Chinese are beginning to
realize these huge increases in their exports can’t be maintained indefinitely. But aside from
correcting some huge trade imbalances, there are other compelling reasons for a shift in Beijing
thinking. A stronger yuan lowers costs of imports by China, which would help many Chinese
manufacturers who have been complaining increasingly about the high cost of energy and other raw
materials they must import. Revaluation also would allow China to boost interest rates — a move
urgently needed to dampen inflationary pressures; keep the economy from overheating to the point at
which it could cause a real-estate crisis; and reduce the need for its central bankers to purchase
low-yield U.S. Treasury securities. 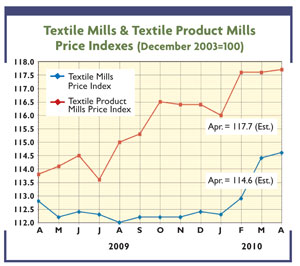 
Chinese currency moves will still leave one big question unanswered: How much upward yuan
revaluation will eventually be needed to level today’s badly-tilted international playing field?
The answer depends on whom one talks to – with estimates ranging from just over 10 percent to as
high as 50 percent.

Textile World
sees the yuan’s value having to increase some 20 to 40 percent if current trade
imbalances are to be corrected. But odds of this happening overnight, or even over the next year or
so, are practically nil. Internal Chinese political pressures would seem to rule out any big
one-shot move. Much more likely: a slow, gradual upward revaluation such as occurred in the
2006-2008 period just prior to the recent worldwide downturn. Equally important, it will take time
for currency changes to work their way through the system and ultimately make a real difference.
Federal Reserve Chairman Ben Bernanke recently noted that moving the exchange rate would not have a
significant short-term effect. Given this kind of thinking, don’t expect any quick miracles. Thus,
while the recent huge monthly increases in incoming Chinese shipments are not likely to be
repeated, it would be unrealistic to expect any big slowdown in overall textile and apparel imports
over the next few quarters. Best bet: anywhere from a 5- to 10-percent boost over the current year.
On the other hand, if all goes well, U.S. textile and apparel import gains should begin to taper
off – averaging out in the tolerable 3- to 5-percent range over the 2011-2013 period.

Another Long Look Ahead


Meantime, new Bureau of Labor Statistics employment projections provide another perspective
on how the U.S. textile and apparel industries will be faring over the coming years. The key
finding: Jobs will decline an eye-opening 48 percent over the decade ending in 2018. But no need to
push the panic button – the slippage isn’t nearly as bleak as first blush would seem to indicate.
Remember, we are talking 10 years here. Convert this 48-percent figure to a compounded annual rate,
and the yearly pace of decline drops down to a not-all-that-bad 4 percent. Further consider that
during the first year of the forecast – recession-ridden 2009 – employment dropped 16 percent.
Upshot: Annual slippage over the next nine years is likely to be only somewhere in the 3- to
3.5-percent range. Moreover, translate this annual job decline into an annual decline in industry
output,  and things begin to look even better. This conversion from jobs to production can
best be accomplished by adjusting employment projections for productivity gains, which are likely
to continue running at about a 2- to 3-percent annual rate. Do the math, and annual textile and
apparel production declines are estimated at only around 1 percent or so. That’s a lot better than
the average double-digit drops of the last three years – and pretty much in line with