Newly released government statistics suggest the huge month-to-month textile declines of late last
year and early 2009 may be nearing an end. To be sure, the latest overall numbers can hardly be
described as bullish. On the other hand, the industry tumble does seem to be bottoming out. Over
the past three months, for example, the Federal Reserve Board’s overall mill output index declined
by only about 1 percent. And this trend seems to be confirmed by another bellwether industry
barometer — textile shipments, which over the past three-month period also slipped by the same
small 1 percent. The point to keep in mind: These latest estimates from Uncle Sam’s number
crunchers are a lot better than those reported over the previous 12 months — a time when mill
output and shipments both fell by more than 20 percent.

But a note of caution: All this in no way means that a big drop for all of 2009 can be
avoided. Put succinctly, the hefty textile activity declines of earlier this year and the only
very-modest leveling off now noted will be taking their toll on 2009’s final results.

Textile World
‘s revised mid-year updated 2009 forecast, for example, now points to something in the order
of a 15-percent or slightly larger decline in industry activity. That’s actually bigger than last
year, when mill production dropped by about 12 percent. On a more optimistic note, however,

TW
now sees 2010 turning out considerably better — with perhaps only some fractional slippage
in mill activity as the US economy slowly recovers from the biggest downturn since the Great
Depression. 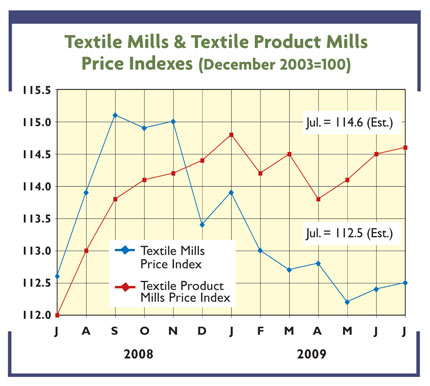 A Closer Look At The Economy


This modestly upbeat 2010 outlook seems fairly certain — despite all the recent talk that
Uncle Sam’s big stimulus package isn’t working. Much of this gloom and doom talk is based on the
fact that unemployment is still very high. But it’s important to remember that the jobless rate is
a lagging indicator. Put another way: During past downturns, employment only began to rise well
after the economy had begun to bottom out. Indeed, if history is any indicator, it may not be until
next spring or summer before these jobless numbers begin to show any meaningful shrinkage.

Meantime, there’s plenty of evidence that the economy is beginning to turn the corner. Some
of these positive signs: overall retail sales are no longer falling; the lion’s share of
Washington’s stimulus money has yet to be spent (some experts say that close to 80 percent of the
total still has not been committed); and the federal minimum wage has just gone up. The impact of
the latter can’t be underestimated since it should funnel more money into the pockets of some 2.8
million workers. The higher minimum should also raise the pay of an additional 7 million employees
— workers whose wages are tied to the minimum level.

In any event, estimates supplied by the Economic Policy Institute suggest that the new
minimum pay boost could add a hefty $5.5 billion to the economy. And most of this money — since
it’s going to low-income workers – is likely to be spent almost immediately. Given all the above
encouraging signs, most economists now see the remainder of the year as flat to slightly higher.
And by next spring or summer, they expect to see gross domestic product increasing at a small but
respectable 2-percent annual rate.


That’s not to say that the industry is out of the woods. Chinese trade, for example,
continues to present serious question marks for both textile and apparel firms. Note, for instance,
that while US imports of these products from all countries are down 11 percent so far this year,
the drop-off is far less when it comes to China — which is off by only 6.5 percent. Conclusion:
Beijing’s share of US textile imports is still on the rise. Moreover, because of even bigger
declines in domestic demand for these products, the Chinese share of the overall US market
continues to grow. More importantly, there’s little to suggest that Beijing will be willing to give
up on its drive for even greater market penetration. Thus, aside from halting any further upward
revaluation of its currency, the yuan, which as jumped 20 percent over the past four years, China
has been recently granting exporters larger tax rebates, more generous loans from state-owned banks
to finance trade, and more government-paid travel to promote themselves at global trade shows.
Another trade worry is that the nation’s banning of all its government agencies from buying
imported goods except where no local substitutes are available. And, last but not least, there’s
China’s huge labor cost advantage – with their current factory pay average put at only $1.25 an
hour. That’s a pretty strong advantage when it comes to selling labor-intensive products like
textiles and apparel.