R
ecent incoming overseas shipment declines can be deceiving. True, the latest textile and
apparel import slippages are seemingly encouraging, and certainly a lot better than the disturbing
advances racked up over the past few years. But for the most part, this drop-off reflects shrinking
US demand for these products rather than any increase in the domestic market share.

While year-to-date incoming shipments, measured on a square-meters-equivalent basis, have
declined about 11 percent over the past 12 months, domestic mill sales of these same products are
off by more than 20 percent. Imports remain a major problem, and the reason is the still-growing
overseas price advantage. The US industry – while continuing to cut costs and streamline operations
– has been unable to close the import/domestic price gap. For example, quotes on domestically
produced textile lines have shown fractional increases over the past year, in marked contrast to
comparable import tags, which have been steady to a bit lower.

The inescapable conclusion: The foreign price advantage is as big as, or even larger than,
it was a year ago. Even more significantly, consumers have become increasingly price-conscious in
today’s recessionary economy. Indeed, prices have become today’s primary buying determinant. If
there’s any doubt on this score, look at recent domestic sales trends. They show outlets that
specialize in low-cost imported goods still managing to eke out gains in what is clearly a
still-declining overall market. 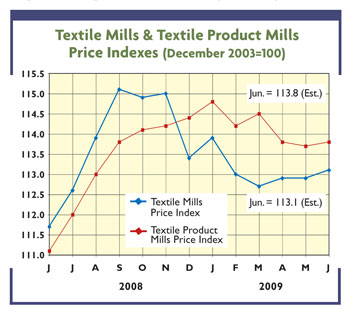 
On a rosier note, the economy continues to show signs of coming out of the biggest nosedive
since the Great Depression. True, some improvement after a year of decline might normally be
expected. But another factor could be Washington’s massive stimulus package, which is finally
beginning to kick in.

Consumer confidence is on the rise. Families are becoming more optimistic about the future
and are showing signs they’re ready to boost spending on textiles and apparel as well as other
goods. Helping prod recovery along is the huge reduction in business inventories, something that
should translate new orders into new production. And further assistance may come from stabilization
in the hard-hit housing sector and a slowly rising stock market – both of which should help recoup
some of the recent losses in family net worth.

Given all the above, gross domestic product (GDP) seems to be bottoming out, with maybe even
some fractional growth possible by late summer or fall. That would be a big swing from the huge
3.5-percent decline in this key yardstick over the past nine months. More importantly, most
economists and business analysts now see the recovery continuing into the next year. Indeed, the
betting is that if all goes according to plan, 2010 GDP could advance by as much as 2 to 2.5
percent.


The anticipated economic bottoming-out and subsequent turnaround should also have some
positive implications for the industry’s bottom line. New projections by economic consulting firm
Global Insight now call for an earnings rise, both for the basic mill and fabricated textile
product sectors, next year. To be sure, the firm’s new estimates, defined as shipments less raw
material and labor costs, call for quite modest gains – nowhere near those needed to recoup the
huge declines of both 2008 and the current year, but they do represent a turnaround. And this
recovery is expected to continue into 2011 and 2012, when earnings increases are put in the 4- to
6-percent-per-year range.

Global Insight analysts also hold out hope for the apparel industry. While still expected to
be plagued by low-price imports, domestic apparel makers are expected to manage a flattening out in
earnings – hardly a recovery, but a lot better than the recent sharp tumbles.

Finally, a few comments on the role that cost containment will be playing in these modestly
upbeat bottom-line projections. Next year, combined labor and material costs for the overall
textile industry are expected to fall more than the projected slippage in comparable mill
production. The implication: falling unit costs, which over the long run should help narrow this
hard-pressed industry’s still-huge import/ domestic price gap.