N
ear-term textile and apparel trends in large part could depend on how American consumers
respond to the millions of tax rebate checks that have been sent out to beef up spending. While
most business analysts agree this one-shot fillip will encourage some uptick in clothing and other
consumer goods sales, there’s still a lot of disagreement as to whether it will have much of a
lasting effect on economic growth. Some, for example, think much of the windfall will be used to
reduce debt and build up depleted savings accounts. There are equally important question marks as
to how the Federal Reserve’s recent interest rate cuts will play out. So far, the impact has been
relatively small. But many feel that, given the traditional lag between monetary easing and
economic pickup, some positive effects should become evident by summer or early fall. The question,
of course, is just how much impact. In any case, putting precise numbers on all these recent
Washington moves isn’t going to be an easy task. Nevertheless, the economic gurus who are willing
to hazard a guess feel that when the dust finally settles, 2008 consumer spending should still be
up by about 1 to 2 percent. While a lot better than some of the recent gloomy forecasts, it still
represents a modest decline from the 3-plus-percent gains of recent years. And this will almost
certainly have some impact on textiles and apparel sales in the months and quarters immediately
ahead. 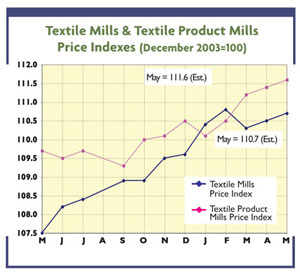 On a somewhat rosier note, our domestic industry’s competitiveness seems to be improving. One
sign: The price differentials between US-made and imported goods is beginning to narrow a bit.
China, our biggest competitor, for example, has begun to post some significant textile and apparel
price increases as that nation’s production and transportation costs begin to take off. Further
evidence of a narrowing US-overseas price gap can be gleaned from latest official government price
reports. Looking at domestic quotes first, Uncle Sam’s producer textile price index for basic
textiles is up less than 3 percent vis-à-vis a year ago. That’s considerably under the
near-6-percent jump noted for comparable imported items. And the picture is pretty much the same in
the apparel sector. Thus, while US domestic clothing tags have remained pretty much unchanged over
the past 12 months, imports of these products over the same period have gone up around 2 percent.
More significant: All indications suggest this drift toward a narrowing US-foreign price gap will
continue through the remainder of the year and into 2009. And it’s all beginning to have some
impact on our imports. One especially encouraging sign: First-quarter 2008 incoming shipments of
textiles and apparel on a square-meters-equivalent basis — from China as well as other overseas
sources — have actually slipped from comparable year-earlier levels. Bottom line: With incoming
totals down a surprising 4.6 percent over this three-month period, our huge market share losses of
the past few years may finally be ending.

Productivity Is Another Plus

Improving mill efficiency is also helping to buoy the industry outlook. Latest figures, for
example, suggest that output per worker in the basic mill sector (fibers, fabrics and so forth) has
advanced at a near-4.5-percent annual rate over the nine-year period ending in 2006. And for the
more highly fabricated textile product area (rugs, home furnishings, industrial products, and so
forth) the efficiency increase, while smaller, is still put in the respectable 2.25-percent range.
The fact that hourly pay rates have been rising at roughly the same pace also suggests that mill
unit labor costs have held relatively stable. That’s not an insignificant development in this
labor-intensive industry. It’s all in marked contrast to the rapidly rising labor costs now being
experienced by many of our overseas textile and apparel competitors. Moreover, these upbeat
domestic labor cost trends are likely to persist as our mills continue to invest in new, more
efficient facilities. One result of this better handle on costs: American mills are becoming
increasingly confident of both surviving and prospering. True, this year’s demand — hurt by the
business slowdown — will take another hit, with perhaps another 4 to 5 percent being shaved off
overall textile activity. But after that, things should begin to look up. Upshot: Our projections
beyond 2008 aren’t all that gloomy — with production and shipment totals expected to fall at only a
relatively small 1- to 2-percent annual rate by late next year or early 2010. Not bad for an
industry that had been virtually written off as recently as one year ago.