C
an a serious business downturn be avoided? That’s the biggest question on the minds of
textile and apparel executives today. Make no mistake about it, the answer is crucial given the
close long-term relationship between how these industries fare and general economic activity. To be
sure, no one knows for certain what the next few quarters will bring. But Textile World remains
cautiously optimistic – feeling recent government moves aimed at priming the pump will help prevent
any really sharp downturn. Clearly, the recent substantial interest rate reductions should make
borrowing both easier and considerably less expensive. And more borrowing almost always results in
more activity. Equally encouraging is the $100 billion-plus tax rebate recently approved by
Congress – money that will flow directly into consumers’ pockets.

To be sure, families won’t receive this cash windfall before May. Nevertheless, just the
promise of the money should keep near-term consumer expenditures from dipping into negative
territory – and in the process also keep overall gross domestic product (GDP) at or only slightly
under present levels during the second quarter. That scenario is a lot better than the one being
painted by some of today’s more bearish analysts. Beyond midyear, most economists believe the tax
rebate, when combined with lower interest rates and new capital spending incentives, will help turn
things around – adding between 1.0 and 1.5 percentage points onto second-half economic growth. If
true, the year as a whole could still end up sporting a small 1.5- to 2-percent overall GDP
advance. Also on a reassuring note: The National Retail Federation, despite all the negative talk,
feels overall US retail sales for the year will still manage to eke out a 5.5-percent gain. This
won’t prevent further erosion in domestic textile and apparel activity, but for the most part, any
further slippage will reflect the still-potent impact of import competition rather than any
cyclical decline in demand for these products. 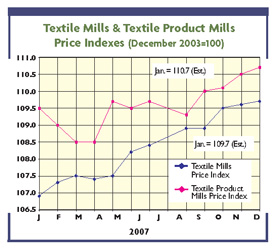 China Is The Problem

Most of these textile and apparel import headaches are attributable only to China. And this
is most clearly highlighted in the National Council of Textile Organizations’ recent annual
economic and trade review. Eye-opening findings: Imports of textile and apparel products from China
were up 15 percent on a square-meter-equivalents basis last year, in sharp contrast to the drop in
US textile imports from many other countries. This continuing Chinese influx has pushed up the
United States’ textile/apparel trade deficit with Beijing by 17 percent. Moreover, the fact that
all remaining quotas on Chinese textiles are scheduled for elimination at the end of this year
could make things even more difficult for US producers. If nothing is done on the quota issue, the
United States could face as much as another $40 billion in potentially unrestrained imports from
China.

A Blueprint For Success

Clearly, some kind of coordinated strategy will be needed to ensure adequate safeguards are
placed on incoming Chinese shipments. The US/Beijing international trading field has to be leveled
– and leveled soon. The United States should not wait for the Chinese to make all the moves. An
increasingly rigorous and aggressive enforcement of existing trade rules would certainly be in
order. But beyond this obvious step, Washington should begin showing a lot more willingness to
follow through on anti-subsidy cases against China. Make no mistake about it, this is an area with
plenty of potential, given the fact that China is now the world’s largest subsidizer of
internationally traded commodities. In the textile area alone, there are at least 63 documented
areas of Beijing subsidization. Another important import-blocking tack: more US anti-dumping moves
similar to those already used against Vietnam. Finally, there’s a lot more that can be done to stop
all the illegal transshipments of textile and apparel products. The tide can still be turned, but
it will have to be done now, while there are still viable industries to save.