T
he latest batch of textile statistics doesn’t look all that bad. Indeed, there are even a
few signs of improvement. Thus, at last report, industry activity was actually running better than
1 percent ahead of its recent spring low. Also confirming a bottoming out are shipments of yarns
and fabrics, where the numbers are now running close to 3 percent above those of three months ago.
Inventories of these basic mill products also are in fairly good shape — with industry stocks put
at only a 1.40-months’ supply — down from the relatively high 1.61 reading of a year ago. Also, the
firming price trend continues — with virtually every single subsector continuing to show some
advances. To be sure, these price advances are scattered and small, and hardly signal any
significant recovery. Nevertheless, they represent a refreshing change from the spate of negative
readings of the past few years.

The improving outlook is making for some revisions in the industry’s expected 2004 totals. Thus,
economic forecasting firm Global Insight has upped its projections for all major industry
subsections — basic textile mills, textile products and apparel. On the basic mill level, dollar
revenues now are expected to rise 3.7 percent for the year as a whole. That’s a lot better than the
fractional 0.6-percent increase the firm was calling for three months earlier. Estimates for this
subgroup’s gross operating profit also have been raised for the current year — from $7.6 billion up
to $7.8 billion. And much the same trend is suggested for textile products such as home furnishings
and carpets. This latter sector’s 2004 revenue gain now is likely to approach 10 percent — well
above the 3-percent increase projected three months ago. Global Insight analysts even see the
hard-pressed domestic apparel industry ending up in the plus column — a welcome change from a long
string of negative years. Bottom line: Despite all the recent gloom and doom talk, the textile and
apparel industries are alive and well. 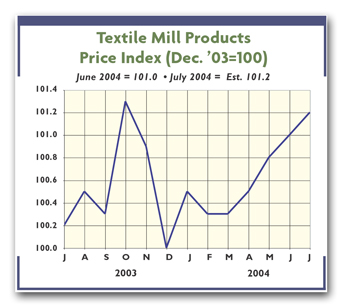 But these mills and manufacturers will have to negotiate one looming pitfall — the approaching
end of import quotas, now less than half a year away. To be sure, there’s continuing strong
Congressional pressure to delay the impending phaseout. But, given recent White House comments, any
action on this score seems extremely remote. Clearly, the trade ground rules are about to change in
a way that will almost surely result in further import gains, with China continuing to increase its
market penetration. The big question is, just how much further penetration will occur.

US firms are threatening to file a wave of requests for special quotas on Chinese products
once limits come off next year. The US industry might also move to request heightened duties on
incoming shipments from China and other countries that might benefit from the removal of quotas —
primarily by filing anti-dumping cases. And last but not least, domestic textile and apparel
executives have indicated further shifts towards China will probably be in the form of small,
well-thought-out steps — not great leaps. Reason: Quick response and replacement considerations
dictate that domestic firms keep a significant production base here in the Western Hemisphere.

The Trade Impact On Prices

The end of quotas also should reverse the current bottoming out in apparel prices — as growing
imports from low-cost producers reduce wholesale prices for retailers and other importers by
substantial amounts. Industry spokesman Peter McGrath of the National Retail Federation’s
International Trade Advisory Committee puts the wholesale cost drop at anywhere from 8 percent to
18 percent between 2005 and 2006. This, in turn, is bound to eventually translate into lower
apparel retail prices. How much, of course, depends on competitive pressures. But there are some
ball-park estimates — Frank Badillo, chief economist at consultancy Retail Forward Inc., sees
retail apparel tags falling about 4 percent annually over the next few years. These lower apparel
quotes should also make it increasingly difficult for the basic textile industry to boost its
fiber, yarn and fabric prices, which are expected to show only fractional increases over the next
few years — well under the expected general inflation rate.