The most recent economic reports show that the U.S. economy is still strong. Consumers continued
to spend freely, while inflation is still well under control.

Despite zero inflation in May, the Federal Reserve is expected to raise short-term rates by a
quarter point.

The unemployment rate fell in May to 4.2 percent, matching the March rate, which was the
lowest in 29 years. Despite the drop in the jobless rate, the U.S. economy created 11,000 non-farm
jobs, following April’s surge of 343,000. Employment continued to shrink in manufacturing falling
by 45,000 jobs in May.

Moreover, the new data show that job growth is moderating. In the first five months of this
year the average monthly gain has slowed down to 196,000 jobs, falling short nearly 50,000 from the
pace in the second half of 1998.

Consumer prices were unchanged in May, after jumping 0.7 percent in April. The core inflation
rate, which excludes the volatile food and energy prices, was up just 0.1 percent, allaying fears
of a buildup in inflationary pressures created after April’s 0.4-percent surge.

The operating rate held steady at 80.5 percent for the third month in a row. The utilization
rate for factories was 79.7 percent in May, up slightly from 79.6 percent in April. Despite a tight
labor market, with an operating rate well below its long-term average of 82.1 percent, and with
downward price pressures coming from imports, there is no threat for higher inflation.

Housing starts rebounded 6.3 percent in May, to an annual rate of 1.676 million units, but
remained below the March 1.746 million level. The strength was in single-family units, which jumped
to 1.409 million from 1.249 million in April.

Business inventories grew 0.2 percent in April, while business sales slipped 0.1 percent in
April. As a result, the inventory-to-sales ratio edged up to 1.36 in April from 1.35 in March.

Results for textiles and apparel were mixed. The industry’s payrolls continued to come down
falling 0.5 percent in May and 0.3 percent in April.

With a strong job market, still low interest rates and rising overall stock prices, consumers
have no reason to slow down spending.

Producer prices of textiles and apparel edged up 0.1 percent in May. Also, prices inched up
0.1 percent for synthetic fibers.

Prices fell 0.2 percent for finished fabrics and for carpets, declined 0.3 percent for
processed yarns and threads, dropped 0.4 percent for gray fabrics and took a 0.6-percent dive for
home furnishings. 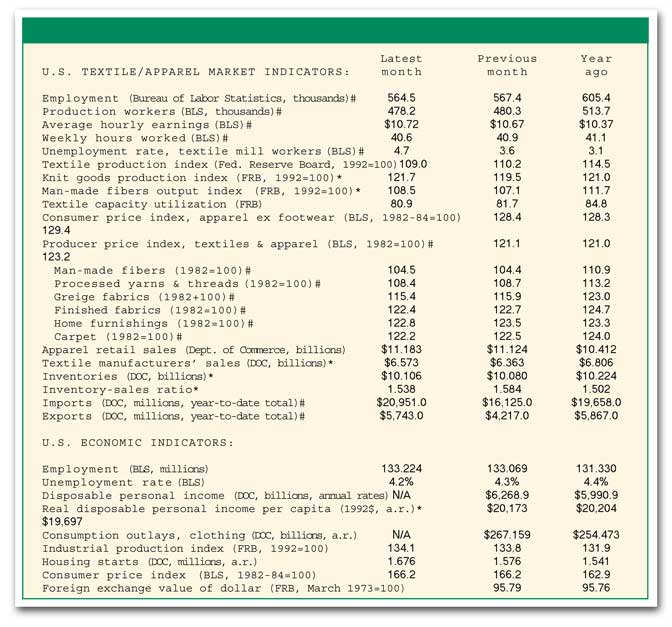