The economy completed its eighth year of expansion in March, and growth continues to be strong.
While most of the latest monthly government reports show a temporary seasonal weakness, overall the
economy was in the fast lane during the first quarter.

Despite a sharp upturn in energy prices, inflation is running below the 2-percent mark and
there are no visible signs for a pickup. This means that the Federal Reserve is likely to leave
short-term rates unchanged in the near future.

Growth in nonfarm jobs rose only 46,000 jobs in March, following an average monthly gain of
276,000 jobs in the previous four months. Construction jobs declined by 47,000 as relatively cold
weather slowed outside activities.

In the first quarter of this year, nonfarm payrolls grew by 560 thousand jobs, and were up
2.2 percent from a year ago.Payrolls for the apparel industry alone are down by 83,000 from a year
ago.

Industrial production edged up 0.1 percent in March, after rising 0.3 percent in February.
Cooler temperatures boosted utility output by 1.9 percent in March. Factory output was unchanged
following a 0.3-percent increase in February. During the first quarter industrial output grew just
0.7 percent at annual rate, the slowest rate since the third quarter of 1998.

With the operating rate down to 80.1 percent from 80.3 percent in February and fierce
competition from abroad, manufacturers will have hard time raising prices.

Housing starts eased 1.3 percent in March to 1.77 million units. Despite the drop, housing
starts were only marginally below the 12-year high of 1.82 million reached in January.

Starts for single-family homes were virtually flat in March, while multi-family units tumbled
5.9 percent to 0.365 million. New home building in the first quarter was the highest since the
second quarter of 1986.

The inventory-to-sales ratio held steady at 1.37, down from 1.38 a year ago and near its
historic low of 1.36. This means there is no undesirable inventory buildup.


Textile Output Falls After Being Up For Three Straight Months

Results for textiles and apparel were mostly negative. Textile output fell 1.7 percent in March
after rising for three consecutive months before. The operating rate for textiles came down to 80.6
from 82.0 in February.

Sales by textile manufacturers dropped 2.5 percent in February, while inventories fell 0.6
percent. Thus, the ratio of inventories-to-sales climbed to 1.56 from 1.53 in January.

The industry’s payrolls were slashed by 0.5 percent in March, following a sharp 1-percent
drop in February. The jobless rate for textile mill workers declined to 4.3 percent.

Retail sales in the first quarter shot up 14.9 percent at an annual rate and were up 8.3
percent from a year ago. While favorable weather was a major factor, the burst in consumer spending
has insulated the U.S. economy from recessions abroad. 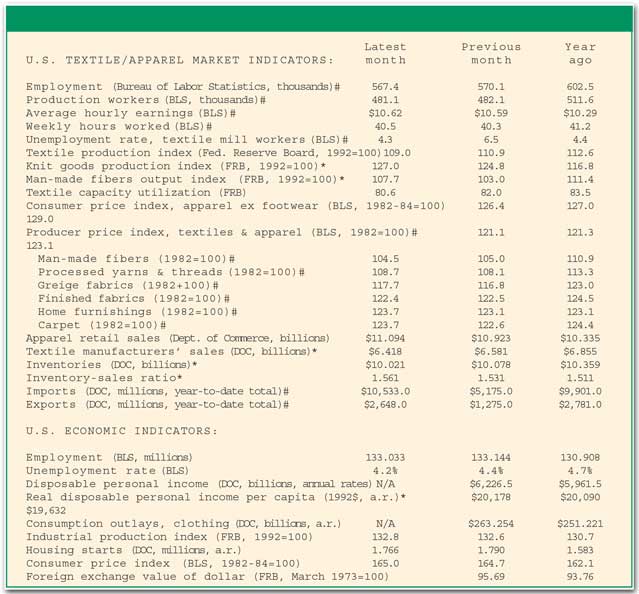