As the first quarter of 2022 comes to a close, demand for U.S-made ring-spun and open-end yarns remains strong.

“I can sell just about anything I can get my hands on,” said one industry source. “But I can’t get my hands on as much as I need.”
A yarn seller said the open-end market is particularly tight. “Frontier was already selling nearly half of its production to Gildan before it was acquired,” he said. Now the open-end market is very tight. I try to get some ring-spun for my customers when I can, but that is hard to come by, too.”

A Gildan subsidiary purchased Frontier in late 2021. “The market was tight even before the sale,” said a yarn broker. “Now it’s even harder. Everyone is waiting for product supply to loosen up a bit, but who knows when that will be.”

As has been the case for the past several years, multiple factors are contributing to the smaller-than-normal supply of product. The global pandemic caused a disruption in the U.S. workforce, the likes of which have been experienced no more than twice in the past century. It is estimated that some 47 million workers quit their jobs. Many of these people were in food service and other lower-wage positions. In manufacturing alone, the U.S. Chamber of Commerce estimates that about 1.4 million jobs were lost at the beginning of the pandemic. Spinners, fabricators and other manufacturers have since struggled to hire both entry-level and skilled workers.

The causes that resulted in many working forgoing manufacturing were multiple. First, for some lower-income families, the temporary Federal unemployment subsidy provided greater income than their normal wages. When people began rejoining the domestic workforce, they were seeking more flexibility, work/life balance, more money, and better working conditions.

People much prefer such endeavors as transportation, mining and construction, rather than in such areas as spinning, weaving, knitting or finishing, according to data from the U.S. Chamber of Commerce. In fact, the chamber says, there is a surplus of experienced workers in those industries.

The combination of high demand, diminished production and other factors have caused a precipitous increase in yarn prices over the past year. It’s not just demand; it is also the high cost for raw materials and energy, as well as a slug-gish global supply chain.

“The cost-per-pound for some yarns has almost doubled since the onset the pandemic,” said one yarn broker. “And until energy prices begin to diminish and supply comes more in line with demand, it’s likely to stay that way.”

The USDA reported multiple inquiries from spinners for later in the year but noted that most companies had already covered their raw cotton needs for the summer.

As frequently reported over the past 18 months, the lack of a robust supply chain remains a major contributor to lack of domestic product availability. As a result, textile and apparel imports increased by more than 25 percent in 2021.

“I don’t see things improving on the supply-chain front this year — and maybe not until well into 2023,” said a logistics analyst. “I think what you are going to see, at least for the short-to-mid-term, is that suppliers will be moving closer to their customers. That should at least somewhat ease the pressure on manufacturers.”

The instability of the domestic supply chain is of some concern for domestic spinners, who count on partners in the West for a significant portion of orders. “The ability to get top-quality product to our Western Hemisphere customers faster than anyone else has always been a competitive advantage for U.S. companies,” said a source with multi-national contacts. “Our hope is that, when the world returns to normal, if there ever will be such a thing, so will the advantages the U.S. has enjoyed over the years.” 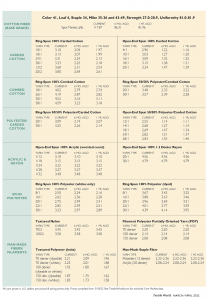