Orders continued to be relatively steady for a number of spinners at the beginning of the second quarter. As one spinner noted, “We have been pretty solid for quite a while, dating back to the middle of last year.”

Another spinner said, “We have regular inquiries and a comfortable backlog. One issue is that orders are still smaller than they once were, but that has been the case for a long time, and I don’t see it changing.  A good portion of our business is short, quick turns.”

Several spinners were concerned about increased operating costs. “Prices for petroleum-based products are higher than they have been in while. That’s not a big issue at the moment, but could become one if oil-producers further decrease production. And anytime our costs go up, we have to fight hard for the ability to pass those increases along to our customers.”

The general political climate is also a concern for a number of people. “This isn’t the most stable time,” said one industry insider. “There are investigations in the executive branch of government, threats of increased conflict in the Middle East, and concerns over international trade. No one is really certain about what is going to happen next, and that has made quite a few people a little nervous.”

Among the concerns of some people is the impact of a potential trade war with China. The sharp increases in tariffs for steel and aluminum imports have resulted in what, so far, has mainly been an exchange of rhetoric between the two nations, although China has increased tariffs on 128 products from the United States by up to 25 percent.

The sudden emergence of China at the top of the international trade news cycle has pushed some other long-standing trade issues — issues that affect the U.S. textile industry — out of the public eye. The renegotiation of the North American Free Trade Agreement (NAFTA), which has gone through seven rounds of talks, is still far from complete, according to multiple sources. The three partners in the agreement — the United States, Mexico and Canada — to this point have had radically different agendas. U.S. representatives want to create a more restrictive agreement, while Canada and Mexico, generally, are seeking expansion.

“What we have been hearing from the beginning,” said one executive, “is that President Trump wants to craft the agreement so that it will help return manufacturing jobs to the United States. NAFTA needs to be a fair and equitable treaty that is advantageous to all parties.”

Among the key points of the talks that affect yarn spinners, as well as the textile industry as a whole, is closing the loopholes in the rules of origin. Former National Council of Textile Organizations (NCTO) Chairman William V. McCrary Jr., in delivering his “State of the U.S. Textile Industry” overview at the organization’s recent annual meeting, said “NAFTA’s yarn-forward rule of origin contains loopholes that benefit third-party countries, such as China.  Closing them would boost U.S. and NAFTA partner textile and apparel production and jobs.”

Some of the current loopholes are a result of U.S. law — The Kissell Amendment prohibits the Department of Homeland Security from using appropriated funds to buy foreign-made textiles, clothing, and footwear. The amendment, however, provides exemptions for Mexico, Canada and Chile.

“On trade, NCTO agrees with President Trump that U.S. trading relationships must be rooted in fairness and reciprocity to benefit a broad swath of American society,” McCrary said at the NCTO meeting. “America’s most important trading relationship is NAFTA, a pillar upon which the U.S.-Western Hemisphere textile supply chain is built. At almost $12 billion combined, Mexico and Canada are the U.S. textile industry’s largest export markets.  Moreover, Mexico provides vital garment assembly capacity the United States lacks at this time. Let me be clear. NCTO strongly supports NAFTA. That said, NCTO agrees with President Trump that NAFTA can and must be improved.”

Interestingly enough, the recent steel and aluminum tariffs may be exactly the incentive for the three nations to come to an accord. Both Canada and Mexico are large suppliers of steel to the United States. President Trump recently tweeted: “We have large trade deficits with Mexico and Canada. NAFTA, which is under renegotiation right now, has been a bad deal for U.S.A. Massive relocation of companies & jobs. Tariffs on Steel and Aluminum will only come off if new & fair NAFTA agreement is signed.” 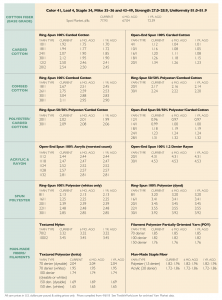