As the second quarter winds down, many U.S. spinners report the uptick in orders that began in March continues to gain momentum. Spinners and other experts attribute much of the reason to rising prices in China and other areas of Asia-Pacific, which allows domestic companies to be more competitive in price. Others maintain that the increase is a correction, based on the mistaken impression by much of the world that the Trans-Pacific Partnership (TPP) Agreement would become a reality.

“Over the past few years, we’ve seen prices from China spike considerably,” said one industry observer. “And this is just not in yarn and fabric, but across the entire manufacturing sector. It is the continuation of a cycle that began when U.S. manufacturers initially began losing market share to imports. First, we saw a tremendous growth in imports from the Western Hemisphere. Then it was Taiwan, South Korea and Hong Kong and, finally, to China. But as each of these nations began to realize gains in revenue, they also began experiencing increased labor costs.”

A yarn broker, who deals in both domestic and imported products, said: “I think a lot of the increase is due to TPP. When customers thought it was a sure thing, they moved a lot of production to Asia. Now that it is off the table, at least until the next election, some of those programs are moving back.”

But a spinner from the Southeast had yet another take on the issue. “We are becoming more cost competitive, despite the strength of the dollar against many currencies,” he said. “Part of this is due to increasing prices from the largest importers, but part of it is due, as well, to increasing efficiencies within our own ecosystems. We have the most productive, most modern industry and infrastructure in the world, and this allows us to compete with just about anyone. If we can’t match price, we can always at least compete on total value. And by total value, I mean the absolute best combination of price, service and delivery.”

Indeed, service and delivery have been significant advantages for U.S. spinners for the last decade. “Our advantage has always been that we produce the highest quality products and have in place a supply chain that allows us to deliver product faster than anybody else,” said one spinner. “Especially in today’s business environment, where customers want a nearly just-in-time experience, our company can deliver the right product at the right time. When you look at overall cost, combining price, transportation costs and the length of delivery time, we are hard to beat, even if the competition is selling product at 60 to 65 percent of our price.”

In 2016, according to NCTO, man-made fiber and filament, textiles and apparel shipments from U.S. manufacturers totaled $75 billion, up 11 percent from 2009. Yarns and fabrics accounted for more than $30 billion of shipments in 2016. Man-made fibers represented $7.4 billion.

“We’ve been optimistic that, after years of steady decline, the U.S industry is once again poised for growth,” said a yarn broker. “And we’ve already seen evidence of that by new plants opening up and new spindles coming on line for the first time in years.”

The Changing Dynamics Of Retail

Despite the overall optimism of many industry executives, there are still signs of potential upheavals on the horizon. “One of our biggest concerns is the uncertain future of major retail chains in the United States,” said one spinner. “When you see some of the most prominent retail chains in the world shuttering stores at an alarming rate, then you have to wonder how that will affect us.”

From an industry observer: “Shopping patterns are changing. Online orders constitute a much greater percentage of online sales than ever, and this is going to just keep growing. Can all these major retailers develop an online presence to compete with the likes of Amazon? The whole dynamic of retail is changing, and those who supply these new channels are going to have to change as well. They will have to respond to new demands, faster delivery of more varied products, new pricing pressures and who knows what else. The bottom line is that the old standard of ‘business as usual’ does not apply any more. Those that can adapt will thrive. Those that can’t — well I wouldn’t be optimistic.” 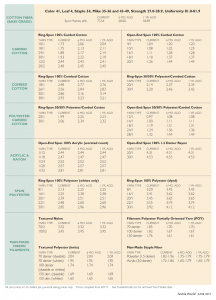