Yarn spinners by and large ended the third quarter of 2016 well below the expectations they had at year’s onset.

“It’s just morose,” said one spinner. “We are getting spot business, but nothing compared to what we expected this year and what we have experienced the past three years. The yarn business is somewhat depressed everywhere.”

Added another spinner: “Orders are short and sporadic. It seems that retailers are waiting for every single thing to move off their shelves before they reorder. It has been disheartening.”

Most spinners say, however, that, unlike previous downturns, their businesses are not in jeopardy. “We have enough to keep us going, even if, at times, it is just barely; that’s the important thing,” noted one spinner.

Yet another had the same answer as in previous months: “Lots of very short, specialized orders and lots of changing out. Nobody wants long runs of anything.”

This particular slowdown began the last month of 2015.  Spinners expected business to rebound early in 2016, but it never happened. Many blame the 2016 U.S. presidential campaign, which has created an atmosphere of uncertainty for many Americans. “Never have I seen so many people concerned about our national leadership. They don’t know what to believe or who to trust. It seems that the election has created a national panic of sorts. Who do we want in office — the bigot or the liar? I’ve heard from more than one person that ‘if so and so is elected, I’m moving to Canada.”

Another spinner agreed: “We’ve spent the better part of the last decade recovering from an awful recession. And now, we are not certain where our country is headed. Do we alienate all the relationships we have tried to build or do we concentrate on building walls around our nation? For a lot of people, regardless of who is elected, it is going to be wait and see.”

Optimism For The Future

In contrast to the concern about who will be the next president is the growing confidence consumers have in the current state of the U.S. economy. The Conference Board reported in late September that consumer confidence had reached a nine-year high. “Consumer confidence increased in September for a second consecutive month and is now at its highest level since the recession,” said Lynn Franco, director of Economic Indicators at The Conference Board. “Consumers’ assessment of present-day conditions improved, primarily the result of a more positive view of the labor market. Looking ahead, consumers are more upbeat about the short-term employment outlook, but somewhat neutral about business conditions and income prospects. Overall, consumers continue to rate current conditions favorably and foresee moderate economic expansion in the months ahead.

The monthly Consumer Confidence Survey®, based on a probability-design random sample, is conducted for The Conference Board by Nielsen, a leading global provider of information and analytics around what consumers buy and watch.

However, the impact of increased confidence on the yarn industry may not be felt for a few months. “I do think we are going to turn the corner,” said one spinner, “but probably not until the first quarter of next year.  Once inventories get depleted over the holiday season, I expect to see an influx of orders early in the new year. I am optimistic that 2017 will begin a return to the activity we’ve seen over the three previous years.”

Quotations for the base quality of cotton (color 41, leaf 4, staple 34, mike 35-36 and 43-49, strength 27.0-28.9, uniformity 81.0-81.9) in the seven designated markets measured by the USDA averaged 69.47 cents per pound for the week ended Thursday, October 20, 2016. The weekly average was up from 66.87 cents the previous week and 61.84 cents reported the corresponding period a year ago. Daily average quotations ranged from a high of 69.85 cents Monday, October 17, to a low of 68.54 cents Thursday, October 20.   Spot transactions reported in the Daily Spot Cotton Quotations for the week ended October 20 totaled 18,347 bales. This compares to 4,907 bales reported the previous week and 13,125 spot transactions reported the corresponding week a year ago. Total spot transactions for the season were 62,548 bales, compared to 75,070 bales the corresponding week a year ago. The ICE December settlement prices ended the week at 69.80 cents, compared to 69.31 cents the previous week. 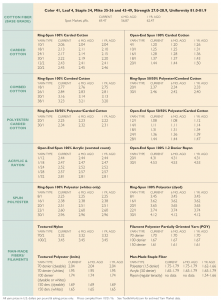