Orders for yarn through the early part of February fell below the expectations of many spinners, causing some to do a deeper dive into the underlying reasons.

“In early January, we attributed most of the slowdown to inventory adjustment,” commented one spinner. “We knew, that with ring-spun yarns being relatively scarce, that a lot of customers had maintained their positions just so they could ensure product was available. Then, at the end of year, they had a lot more yarn on hand that they needed. We were expecting that and we weren’t too concerned.” He continued, “At the first of February, sales had not picked up substantially.  And we began to wonder why.”

The answer? Blame it on the weather. Unseasonably mild temperatures throughout much of the United States through autumn and the early part of winter created a significant reduction in apparel sales. “When it feels like May in New England in the middle of December, winter clothes don’t just fly off the shelves. Apparel was staying on the shelf, and retailers reduced their orders for replacements, which, in turn, caused our orders to fall off.”

November was the warmest month ever recorded. A strong El Nino effect added even more warmth to the United States and Europe. The impact on retail apparel sales was significant. In November alone, department store apparel sales were down 2.8 percent. From November 1 through December 31, research company Planalytics said specialty apparel store sales declined $572 million over the same period the previous year.

The weather-related apparel sales decrease is likely to be short-term. However, apparel manufacturers are concerned over changing consumer buying habits that focus on areas other than clothing.

“It’s an interesting time for apparel,” one expert said in a recent article in the U.S. edition of The Guardian. “Consumers are spending more money on experiences and home goods and autos. They’re getting great deals on sizes and makes of cars, and it’s taking market share from apparel.”

“This is not something any of us expected,” said one industry insider. “Last year, we had a long and cold winter, and I think most of us expected the same this year. We weren’t prepared for it to be 60 degrees in Central Park in December.”

As the weather starts to warm — after all, Punxutawney Phil predicted a quick spring on Groundhog Day — spinners hope to see orders start pouring in again. Yet, even then, there are worries.

“Certainly, there are a lot of variables that could change the whole sales picture for the rest of the year,” said one spinner. “We have been relatively optimistic that we would maintain the solid core of business that we’ve enjoyed over the past few years. But, it all depends on how consumers spend their discretionary income, if they spend it.  Election years always make me nervous, because you never know what to expect from people. Will they like what they hear and be confident about the future? Or will the scare tactics of some politicians make them take a wait-and-see attitude toward spending?

Cotton prices continue to hover around the 60-cents mark. As of February 19, spot quotations for the base quality cotton (color 41, leaf 4, staple 34, mike 35-36 and 43-49, strength 27.0-28.9, uniformity 81.0-81.9) averaged 58.28 cents, up from 58.12 cents the previous week, but down from the 62.80 cents reported during the same period last year. “The stability of cotton prices over the past 18 months has been a strong contributor the prolonged period of good business,” said one spinner. “If we can get over the current blip, I believe we will be moving back in that direction shortly. 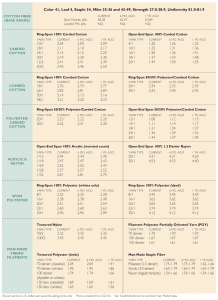 Click here to view current yarn prices as a pdf