Officially, in terms of both volume and value, India is now the second largest textile manufacturer in the world behind China. Therefore, India now deserves serious attention from other leading apparel based textile nations operating out of East Asia, as well as in the advanced performance textile arenas of Japan, Europe and North America.

With other parts of the world struggling to achieve sustained growth, the study concludes that now is the time to set up textile operations in India. Any company coming in early will take advantage of a wide range of incentives and also be in a stronger position lying behind relatively high import duties for fabrics. It can readily capture significant growth in domestic textile demand, which is being driven by the extraordinary demographic dividend that could accelerate India’s standing as a potential global powerhouse in man-made textiles.

The Indian textile and apparel industry was estimated at $108 billion in 2013. It has grown at a compound annual growth rate (CAGR) of 13 percent from 2008-2013 and is projected to continue to grow at a CAGR of 12 percent and attain a size of $440 billion by 2025.  With an estimated domestic consumption of approximately $68 billion and an export value of roughly $40 billion, it contributes to about 6 percent of the $1.8 trillion Indian economy and nearly 13 percent of the country’s total exports basket.  It is also the second largest provider of employment after agriculture, providing jobs and an income for around 45 million people directly and indirectly. 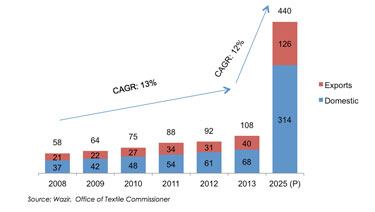 
The domestic market for textiles, apparel and technical textiles — the new generation of performance textiles — is estimated at approximately $68 billion, out of which apparel retail, technical textiles and home textiles contribute $50 billion,  $13 billion and $5 billion respectively. The total market has grown at a yearly growth rate of 13 percent over the past five years. The overall apparel market is expected to grow at a CAGR of 12 percent and reach a size of $200 billion by 2025. With growing numbers of working women demonstrating their economic independence, it is expected that by 2025 the womenswear segment will gain a majority share of 45 percent.

Indian consumers’ affinity towards brands and organised retailing is increasing, and this is fuelling consumption growth for all commercial products, including textiles and apparel. Organized retailing in India currently stands at only 8 percent of the overall retail market of $550 billion. Within this, apparel is the single largest category with a share of 35 percent. The vast population base and growing economy has attracted global retailers and brands into the Indian market, either on their own, or in partnership with a local player. Many new textile investments are already progressing, and there is room for a great deal more besides.

Per capita consumption in the urban areas always is higher than that in the rural areas, and India is witnessing fast growth and urbanization. By 2030, it is estimated that 40 percent of India’s population will live in urban areas, and India, by then, will have 68 cities with population of more than 1 million. This migration away from rural areas into cities will clearly accelerate consumption growth, including of course textile and apparel. 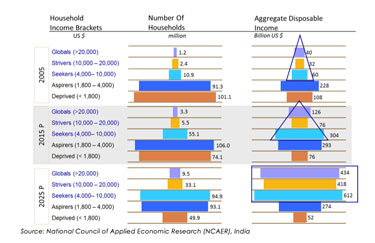 Despite the complexities of the many political, economic, social and commercial pressures raised and discussed within the study, there is nevertheless marked progress being made, especially within India’s polyester sector. There certainly is a renewed national commitment to increase textile production under the guidance of India’s new political regime and with strengthening industrial support from a very committed polyester fiber sector.

The study identifies a significant window of opportunity over the next 10 to 15 years for Indian companies especially to take a very serious leap forwards in the man-made domestic and export textile and apparel segments. This builds on the assumption that China will start to turn in on itself and fill local demand rather continuing to focus textile and apparel exports.

India has a very powerful and impressive cotton yarn and fabric business sector that now will be looking at what it can achieve in the non-cotton and cotton/manmade blends and 100-percent man-made areas. The sector appears to have the confidence and capability to shift emphasis towards India’s growing man-made textile industry. The study questions whether it can do this alone or whether a whole series of new international Foreign Direct Investment led joint ventures are required to reshape India’s textile industry.  India’s man-made fabric industry requires significant strengthening in terms of scale and integration, with fresh investment and a more sophisticated and focussed approach required at the textile level to truly compete on the world stage.

In this regard, India is well behind China, although future potential looks extremely bright with tremendous growth prospects seen for the right blend of textile companies. This trend certainly applies in the key woven sector, but also increasingly evident in knitted and nonwoven applications, where growth rates are expected to be very significant over the next 10 years.

The study sets out to explain that far from being a mature market, fundamental consumption growth in polyester based textiles is about to accelerate not only in India but also in China and Southeast Asia, followed by steady growth in emerging markets such as Africa and South America; Africa becoming a major production centre for apparel, fed, it is assumed, by fabrics from China and potentially India if investments allow.

Worldwide, man-made textiles, which make up around 70% of total textile output, are growing at more than 5-percent-per-annum.  However, the total global textile system including all natural and manmade products — totalling around 90 million metric tons of equivalent fibrers — is only growing at an average rate of just below 4 percent demonstrating the slow growth, in comparison, to the cotton/viscose natural fibres sectors. This optimistic scenario for man-made textiles is occurring despite the economic uncertainty that pervades most regions, and largely is because of rapid technological developments seen within the polyester chain, especially within the performance apparel and home textile segments, but also is because of a strong surge of consumption within the fast moving nonwovens area. All of this is examined within the study.

Within the global textile system, the study demonstrates that polyester is now by far the dominant textile constituent in most end use sectors requiring manmades, including predominantly, apparel, but also home textiles and technical textiles. Polyester is claiming more than 75 percent of the estimated 60 million metric tons of fibers consumed in man-made textiles as of 2013. This share is set to increase over time. 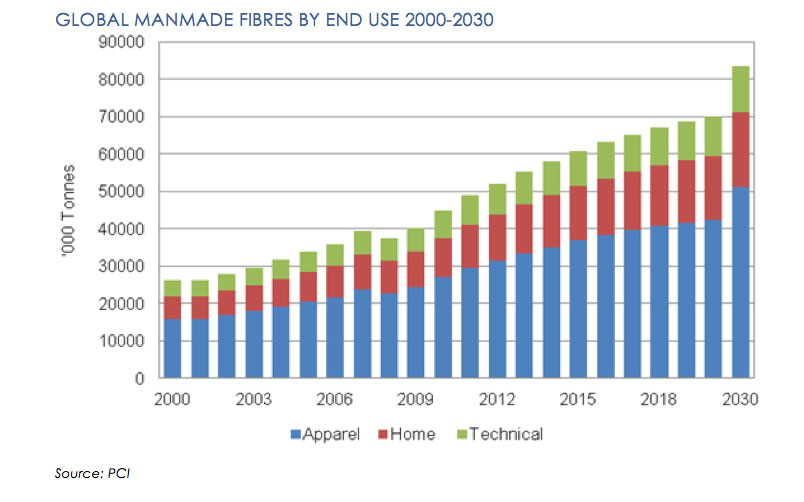