Stephanie Kwolek began working in Wilmington, Del.-based DuPont’s textile fibers research
laboratory in 1946, and in 1971, she developed Kevlar®, a para-aramid fiber that is exceptionally
strong and used in various consumer and industrial applications including military and law
enforcement protection. Kwolek was the fourth female member inducted into the National Inventors
Hall of Fame in 1994, and was awarded the National Medal of Technology in 1996 and the Perkin Medal
in 1997. Now retired, Kwolek currently serves on the National Research Council and National Academy
of Sciences and works as a consultant for DuPont.

Elliott White Springs took over Springs Cotton Mills — now known as Springs Creative Products
Group LLC, Rock Hill, S.C., a supplier of retail fabrics, packaged craft kits and home products —
from his father in 1931 and transformed the business despite the Great Depression. Springs
consolidated five existing run-down mills into one company, built a finishing plant, established a
sales organization and modernized the business. His unique Springmaid advertising campaign remains
one of the most notable in the history of advertising in the United States. During his 28 years of
leadership, the company’s assets increased by $125.5 million and its sales increased by $176
million. When he died in 1959, Springs Cotton Mills was the seventh-largest textile company in the
United States. Springs was an accomplished aviator, having served in WWI, during which he was the
fifth-ranked Flying Ace and received the British Distinguished Flying Cross and the American
Distinguished Service Cross; and also served in WWII as lieutenant colonel. He also authored nine
books, three screenplays and many short stories.

Robert Ten Broeck Stevens joined J.P. Stevens and Co. Inc., a North Andover, Mass.-based
woolen mill, in 1921 and became president upon his father’s death in 1929. During his tenure, the
company experienced strong growth grew from a regional textile organization to a leader in U.S.
textiles. His many outside activities included a term as Chairman of the New York Federal Reserve
Bank; Colonel in the Army’s Quartermaster Corps concentrating on military textile requirements;
Secretary of the Army under President Eisenhower; and principal in the Army-McCarthy hearings, in
which he supported military personnel. Stevens became Chairman of the company in 1955 and served
until his retirement in 1965.

“Each of these honorees has had a profound impact on the textile industry in unique ways,”
said Jim Coleman, president and CEO, ATHM. “They are worthy of great recognition for contributions
they made to shape the history and future of textiles, and we are honored to pay tribute to their
achievements.” 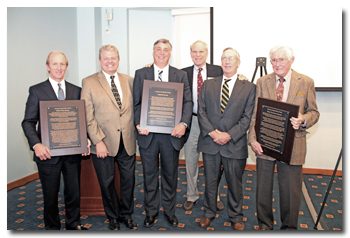