It is no secret that nonwovens are developed for new market applications virtually every day. Just
in the area of disposable products, they qualify today for a seemingly infinite number of end-uses.
For decades, nonwovens were produced only in the West, thanks to the advanced machinery used by
Western nonwovens suppliers. But, as in almost every other sector of the textile industry,
cutting-edge machinery has also arrived in Asia.

The Asian nonwovens industry shows a different face in various countries. However, China has
been the biggest market player in recent years, and in 2010 was responsible for 65.2 percent of the
total nonwovens production of nearly 2.9 million metric tons; followed by Japan with 10.9 percent;
Korea, 7.8 percent; India, 6.1 percent; and Taiwan, 5.2 percent, according to the latest data from
the China Nonwovens Technical Association (CNTA). Table 1 shows nonwovens production volumes in the
last two years, which correspond to the period of the recent global financial crisis. 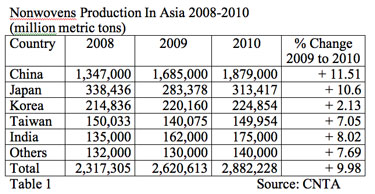 The increase is considerable. If one compares the 2010 production figures to those from 2001,
when India didn’t have any significant production, overall nonwovens production has tripled in Asia
(See Table 2). 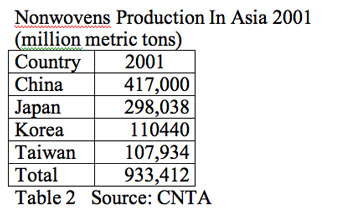 China increased its output nearly fivefold within 10 years, reflecting the country’s heavy
infrastructure investment – for example, for new roads. The other countries also are steadily
increasing nonwovens output, but not as much as China.

For example, according to China’s 12th Five-Year Plan (2011-2015), more than 45 million jobs
are to be created in urban areas, which means there will be a lot of building and road
construction, for which products such as geotextiles made of nonwovens are very much in the focus.

Table 3 shows production volumes for the different bonding technologies used to produce
nonwovens in the four top producing countries in 2010. 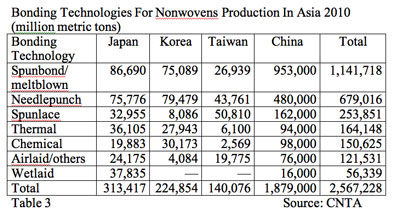 Spunbonds/meltblowns top the list with 44.47 percent of the total, thanks to their
capabilities to produce large quantities. However, needlepunched nonwovens rank second with 26.45
percent, which demonstrates that technology’s unique flexibility to process virtually all fiber
types, whether virgin or recycled. Spunlace technology will be gaining ground in the future, thanks
to its growing flexibility and extended weight range as well as a gradually increasing production
speed — which includes the use of modern high-speed cards, which were the bottleneck up to now.

Nonwovens, or felts, and industrial fabrics are not an invention of the present day and age.
The ancient Egyptians knew how to employ textile reinforcements long ago. Over the last two
decades, nonwovens have been one of the few textile industry sectors to grow between 5 and 10
percent every year.

One big advantage in the sale of nonwovens is their proximity to the market. Most products
are tailor-made. The most important point in production is the know-how, not the quantity to be
produced. Until recently, technical textiles were mainly a success in Western countries, thanks to
the machinery, equipment and superior knowledge of the production processes in those countries.
Those times are gone. Industrial fabrics are by far not a substitute for traditional fabrics, but
the basis for new products. The area of end-uses is seemingly endless, and for Asian producers as
well.