MILAN — May 27, 2011 — During the first quarter of 2011, Italy’s textile machinery sector continued
on its positive trend started the previous year. The orders index for the period ranging from
January to March reached 164.6 points, marking a 12% growth rate over the previous quarter, and a
rise of 42% over the same 2010 quarter period. Orders are on the rise both for the domestic market
(with an index of 143.9 points) and foreign markets (176.3 points). This comparison with the last
quarter of 2010 shows a significant increase for domestic orders (+33%), whereas the index for
exports is less decisive (+10%). The order portfolio as it stood on 30 March 2011 ensured work for
the next 5 months. The spinning machinery sector has orders lined up for the next 10 months, while
those of “other productions” exceeded 5 months, and from 2 to 3 months for other sectors. 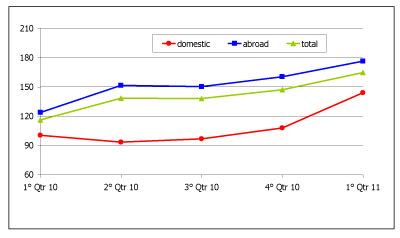 In spite of the consolidation in orders for the first quarter of 2011, Italian machinery
builders remain cautious in forecasting a further increase in the order gathering levels achieved
thus far. For both the domestic and export markets, the majority of manufacturers believe that the
second quarter of 2011 will record stable orders compared to the three previous months. 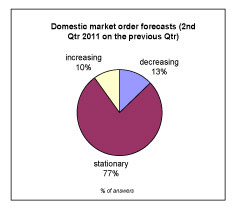 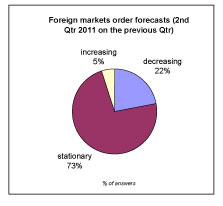